The curious tale of how an Irishman who had returned home, just after the Great Famine, built himself a castle and an eccentric inventor’s workshop in County Cork. 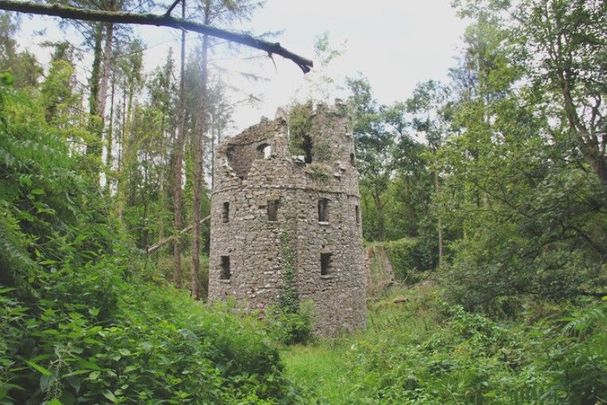 The curious tale of how an Irishman who had returned home, just after the Great Famine, built himself a castle and an eccentric inventor’s workshop in County Cork.

In December 2018, a rare and truly unusual property, Castle Curious, in Doonawanly, Castletownroche, County Cork went on the market for $170k (€150k). While the thought of purchasing a real 19th-century Irish castle for such a cheap price might pique readers interest what’s even more intriguing is the tale of the man who single-handedly built the property over three years, just after the Irish Famine, having returned to Ireland after years of traveling in America.

The property, or what’s left of it today, is certainly beautiful to behold. The building, Castle Curious, is now roofless, but it was originally designed and constructed by local eccentric and inventor Johnny Roche who used the castle as a workshop, smithy, a mill (on the close by River Awbeg), and his home.

It’s little wonder that Roche was regarded at the time as a local celebrity.

Born in the early part of the 19th century, Roche married and emigrated to America, in about 1840. According to the local Killavullen County Council history page, Roche and his wife soon parted ways and the Irishman traveled in the US for a while before returning home to Ireland.

Roche is said to have built the massive structure, Castle Curious, in three years, all by himself.

Castle Curious is a detached three-bay, three-story limestone built on a rectangular plan. Features of the castle include bowed turrets to the north-east, crenellations and limestone eaves courses, square-headed window openings and roughly dressed limestone lintels and sills.

On the site, Roche built a mill for wool and flannel, which he later used to cut flagstones for tombstones. He also converted the mill to grind corn. The millstones were found recently on the site.

The Irish Examiner, a Cork newspaper, reports that there were many tales of Roche’s “deeds and derrings-do”. One tale being that “he used to climb to the 45’ high top of the southern turret to blow his horn, literally and metaphorically.”

Roche was a self-sufficient man. He practiced his original craft of blacksmith and reportedly made his own clothes. He made and repaired fiddles and musical pipes and is even said to have been ahead of times in the world of dentistry. According to the local historic page, he could “prepare a false tooth from a cow's hoof, and fit it in place of an extracted one.”

It’s said that the only tool he ever bought and didn’t create himself, was his anvil. According to local legend, he also devised a scheme for plowing his land using the power created by the mill wheel. Apparently, he was about to make his own rope, by growing flax for the hemp, when an admirer donated the rope.

The renaissance man was also an artist and sculpted busts, according to the local historical site “three of which were owned by Grove White and another has recently come to light.”

As the local site asks “If discipline were added to his genius, what might have been achieved?”

Johnny Roche died on Feb 10, 1884. Sadly, he was not buried in his self-built tomb in the middle of the River Awbeg. For the tomb, he had prepared his own epitaph which read"

“Here lies the body of poor John Roche, he had his faults but don't reproach; For when alive his hearth was mellow, An artist, genius and comic fellow.”

It’s said that  ‘Coroner’ Byrne had nixed Roche’s plan to buried in the river advising him “Go, rest thy bones in Mother Earth and don’t pollute the river.”

Castle Curious is now being sold by engineer Peter Haughton. No stranger to renovating historic buildings he has made a plan for it and feels that any renovation of the castle will attract conservation heritage grants as it is a listed structure and site.

According to the real estate site, Daft.ie, Castle Curious remains for sale under private treaty.

Do you know someone who’d like a New Year’s project? What the joy or let us know what you think of the building and its incredible creator in the comments section below.