The Irish cadets who performed the final salute for JFK

The Irish teenagers who were the only foreign military to ever present a guard of honor at the graveside of a US president. 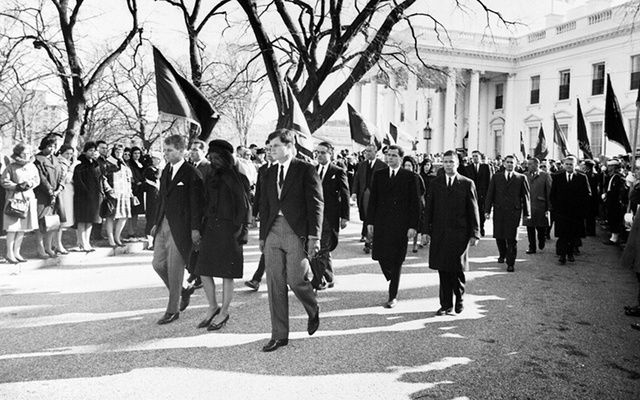 Just teenagers at the time, the Irish Army cadets who formed a guard of honor at the graveside of President Kennedy and performed the final salute for the fallen president can still hardly believe what they experienced over 50 years ago.

On Monday, November 25, 1963, 26 Irish Army Cadets lined up alongside JFK’s mourning party to perform The Queen Anne Drill, otherwise known as the Funeral Drill, for the US President assassinated just three days earlier. The only foreign military to ever form such a guard of honor at the funeral of a US President, the cadets were present at the special request of First Lady Jackie Kennedy, who knew how much that specific salute had impressed her husband when he first witnessed it in Ireland five months earlier.

JFK first saw the Funeral Drill performed during a tribute to the 1916 Easter Rising leaders at Arbor Hill in Dublin during his whirlwind visit to his family's ancestral homeland. Kennedy is said to have been so taken with it that he requested a video of the drill when he got back to America.

“It’s kind of a silent drill, and there’s nothing more powerful than silence,” James Sreenan, former Chief of Staff of the Irish Defence Forces, and one of the cadets who performed the graveside drill told the Irish Examiner. Sreenan explained that while the drill has been performed going back to the Irish Confederate Wars in the 1640s, it would have been new to the American military.

“Most drills in any army are short, snappy movements, executed on the orders of somebody in charge. They’re about synchronicity and ‘bang, bang, bang’, whereas this funeral drill is a silent drill — without many executive orders — that is carried out very slowly. That makes it much more difficult — to synchronize slow movements is much more difficult than fast movements.”

In 2013, on the 50th anniversary of JFK’s assassination, eleven of the original cadets returned to his graveside reflecting on the experience which saw them called back to the army training camp in the Curragh, Co. Kildare, while they were on a night of reprieve. Many of them had been at a dance hall or at the pictures when they were called back to barracks and told they were about to journey to the US.

“In hindsight, things become almost inexplicable – how close we were to the grave, how privileged we were to be there with the representative body of the American forces away to our right,” Dick Heaslip, a retired army colonel, and father of Irish rugby star Jamie Heaslip told the Irish Times.

“You can’t but stand there and think what you did 50 years ago,” he continued, stating that he’d returned twice to the grave since being there as a young man in 1963.

“I find myself moved by it.”

“It was totally unprecedented to have foreign troops in a position of honor next to the grave of a US leader,” Bill Nott, a retired army colonel, continued.

JFK and Jackie Kennedy on the day of his assasination.

“You just can’t picture cadets from West Point being at the graveside of an Irish president.”

“Donal Sweeney was the duty cadet at the time,” Nott tells.

“He rang the manager of the Royal and said, ‘Look, you’ll recognize them by their tight haircuts.’ It was ’63 and The Beatles were in but we had the crew cuts. The manager tapped me on the shoulder and said, ‘I can’t tell you what it is, but it’s important to get back to the Curragh fast.’”

That evening was spent in rushed preparations as the cadets learned that only 26 of the 39 would have the opportunity to travel, while the lucky chosen ones practiced the drill till the early hours of the morning, sorted emergency travel documents in the absence of several passports, and scrubbed up old Lee Enfield No 4 rifles that had been stored away.

Many were also forced to borrow money from a local store keeper so as to make the journey.

“We were paid monthly so we were pretty strapped for cash. There was a very good shopkeeper on the Curragh called McGinn. He ran two shops which were very close to the Cadet School. He came up front and gave to any fellow who needed it a sub of £25, equivalent to a month’s salary.”

The next morning they were flying to the US with their rifles stored under their seats in a time well before the current restrictions placed on carry-on items when flying.

They were greeted off the plane by US Secretary of State Dean Rusk, whom Nott describes as having “looked like a man who hadn’t slept for a week.”

“He probably hadn’t because he was next in line after the vice-president.”

And so the cadets found themselves lined up ahead of the US army, air force, navy and marine corps, performing the drill for some 41.5 million homes in America watching the funeral on TV. At the time there were just 50 million homes with televisions in the US.

“At the Curragh, we were told that you’re going to carry out the drill at the graveside,” said Sreenan.

“This term was being used ‘at the graveside.’ At the same time, at the back of my mind, was the fact that all of the US Army will be involved in this funeral and what will ‘at the graveside’ mean? Will we be stuck in some corner? When we were brought up to the grave on the Monday morning, this officer came forward and said, ‘This will be your position.’ It was an absolute shock that we were standing right at the graveside.”

“I have this photograph,” continues Heaslip, “which is valued here in my home — and it makes me realize how close we were to the mourning party — but I was so committed to what I was doing that I didn’t see beyond that. We knew how important it was — to us, to the Irish Defence Forces and to the Irish State — to get it right. There were no second chances.”