Ireland and the Paris Peace Conference: How Sinn Féin Waged a Diplomatic War

We’ve all heard the story of the Easter Rising, but the next chapter in the fight for Irish freedom is surprisingly unknown. 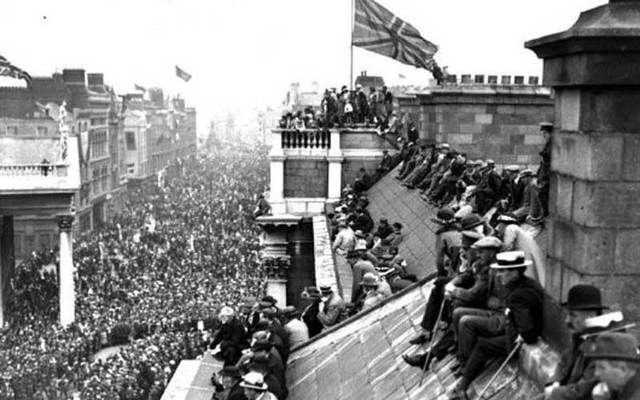 The Victory Parade in Dublin, 1919. http://www.andrewcusack.com/

The events of Easter 1916 when Irish republicans launched a full scale military attack on British power in Ireland are well known. But the story of their attempt to gain independence through diplomacy a few years later is equally compelling and yet almost completely unheard of.

Mere weeks after the guns of the Great War fell silent the leaders of Allied victors assembled in the Parisian suburb of Versaille where they drew up a treaty that would punish Germany, redraw the map of the world and set up an international body aimed to prevent future conflicts. Few of the diplomats assembled there would have given Ireland much though when they arrived in France that chilly January in 1919. Despite Sinn Féin’s huge gains in the Britain’s General Election the month before the United Kingdom’s westerly appendage was notably absent from the Peace Conference’s agenda.

But Sinn Féin and Irish America had other ideas, and they spent the six months rallying support across the globe for Ireland to be given a hearing by the world’s most powerful forum. So as the great statesman of the world arrived in Paris, bedecked in their top hats of darkest black, so too did a small band of delegates from Ireland lead by the future President of Ireland Seán T. O’Kelly.

Sent with the good wishes of their Sinn Féin colleagues, they arrived armed with a message from the First Dáil addressed to the Nations of the Free World, calling for them to “support the Irish Republic by recognizing Ireland's national status and her right to its vindication at the Peace Congress.”

It was a tall order, but the message had a potency that was already worrying British authorities in Dublin Castle who fretted that the issue could derail the entire Conference and whip up anti-British feeling in Irish America.

Unsurprisingly, when O’Kelly arrived in Paris on February 8th, his request to see US President Woodrow Wilson was curtly dismissed. Whilst his grandparents may have hailed from Strabane, Co. Tyrone Wilson had no interest in the Irish Question, cordially loathed Irish America and had no desire to rile his British allies. He was a passionate believer in self-determination, but only for the territories of the defeated Central Powers.

Nevertheless, such was the power of the Irish American lobby he was forced to confront the issue when news of the growing support for Sinn Féin stateside reached him. In March the House of Representatives comfortably passed a motion by 261 to 41 votes asking for the Peace Conference to hear Ireland’s case. Later the American Federation of Labor backed a similar motion and by the time the issue reached the US Senate only a single vote was cast in opposition to the resolution. Sir Horace Plunkett - one of the President’s correspondents and a former Unionist MP for South Dublin to boot - wrote candidly to him from Michigan that, “ninety-five per cent of Americans seem to take the Irish view."

Reluctantly Wilson gave permission for the American Committee for Irish Independence to address the Conference, something his aide Colonel House wrote in his diary he did believing that refusal, “would cause more irritation here among the Irish and the delegates would do no particular harm in Paris.”

How wrong he was. Under the impression they were on a low-key fact finding mission, British Prime Minister David Lloyd George personally gave them permission to visit Ireland as well. Their reception among nationalist Ireland was rapturous, with thousands turning out to greet them. “We do not appear in Paris or Ireland in any position except as that of advocates of the present Irish Republic”, Chairman Frank Walsh thundered to the approving roar of the crowds.

The British press were unforgiving and subjected Lloyd George to surely his worst set of headlines since the end of the Great War. “[Lloyd George] must now repair his Irish blunder without delay… he must declare immediately that a Republican status to Ireland now or at any other time is utterly impossible,” the Irish Times bellowed at the chastened statesman. With that any hope of the delegation addressing the Conference vanished and when they finally did meet President Wilson some months later he scolded them like errant schoolboys.

“We were well on the way to getting Mr de Valera and his associates over here, when you made it so difficult by your speeches in Ireland that we could not do it… it was you gentlemen who kicked over the apple cart,” the President snapped, although there is no documentary evidence to suggest the US delegation had made any effort to do so.

As it became increasingly clear that Wilson intended to do nothing for Sinn Féin, the party’s stance towards the President hardened, leaking to the press that it would use its clout in Irish America to kill off the President’s beloved League of Nations proposal. Clearly frustrated, an irate Wilson pondered playing the sectarian card, telling his press secretary, “I have one weapon I can use against them, one terrible weapon… I only have to warn our people of the attempt of the Roman Catholic hierarchy to dominate public opinion, and that if necessary I shall go home and tell the public.”

And whilst he never carried out his threat he made clear in later years that he blamed Irish America for his administration’s failure to pass the Treaty through the US Senate. “Any man,” he later declared, “who carries a hyphen about with him [i.e., a hyphenated American] carries a dagger that he is ready to plunge into the vitals of this Republic whenever he gets ready."

Still, their efforts at pressuring Wilson were measurably more successful than attempts to woo the French Prime Minister Georges Clemenceau. As President of the Conference he wielded enormous clout but as far as we can discern never once used it to further Irish interests. In his extensive notes from the year 1919 he mentions Ireland briefly once and made no public utterance on the subject. Unlike in America, the Irish diaspora in France were small in number and politically marginal. Although Sinn Féin’s cause was championed by the prominent socialist politician Albert Thomas and a number of intellectuals, in the end it came to nothing. Clemenceau was keenly aware that in order to achieve his goal of crippling Germany he needed allies, and he would never risk this by upsetting the British over so peripheral an issue as Irish independence.

Back in Ireland, the Conference’s refusal to address the Irish Question had solidified nationalist opinion behind Sinn Féin. Although predictably unionists dismissed Sinn Féin and railed against American interference in British domestic policy, increasingly Home Rulers - who had once been skeptical of de Valera and his party - now argued that Ireland’s case should be heard in Paris.

Prophetically, in March de Valera warned the British, “If the Paris Conference fails to take steps to extend self-determination to Ireland, violence will be the only alternative left to Irish patriots.” This was the first of many warning signs that Sinn Féin would resort to armed struggle if Irish independence was not granted.

By May it was clear that the matter would not be addressed by the Conference but that the delegation had scored a public relations triumph for Sinn Féin, heaping pressure on the British Government to act upon the Irish Question. One Westminster ally wrote to the delegation that he now believed Lloyd George would legislate for “a larger measure [of self-government] than I had thought possible for a generation to come."

Upbeat, the delegation agreed and wrote home arguing the party’s efforts were best transferred to the United States where De Valera was to be dispatched, intent of rallying support for the Irish Republic among the diaspora.

The Peace Conference limped on until January 1920 but as far as the Irish were concerned the party essentially came to an end in June 1919 when the infamous Treaty of Versaille was signed. The agreement would redraw the map of the world but do nothing to change the status of Ireland as a part of the United Kingdom.

The Treaty’s signing was marked by victory parades across the British Empire and Ireland was no exceptions. Huge crowds, many waving Union Jacks, flooded Dublin city center to show their appreciation for Irish veterans of the Great War. Such outward enthusiasm for Crown forces would easily have tricked a visitor into thinking support for Sinn Féin’s support in retreat. Far from it, the Conference had been a public relations dream for the republican party. In the words of one Irish Republican Brotherhood member, Patrick O’Hegarty, “We never had a chance of getting into the Peace Conference... The rendering powerless of English Government here was the real Sinn Féin policy”.

With de Valera now on a whirlwind tour of the United States, Irish America was rallying to the green flag like never before and Britain’s moral authority to govern Ireland in the eye’s of the world had sustained a mortal blow.