Can you help identify this man in colorized video of 1920s Ireland?

Posted by the Old Ireland in Colour Twitter account, the 40-second video features a discussion between a local man from Ennistymon and interviewers from the US. 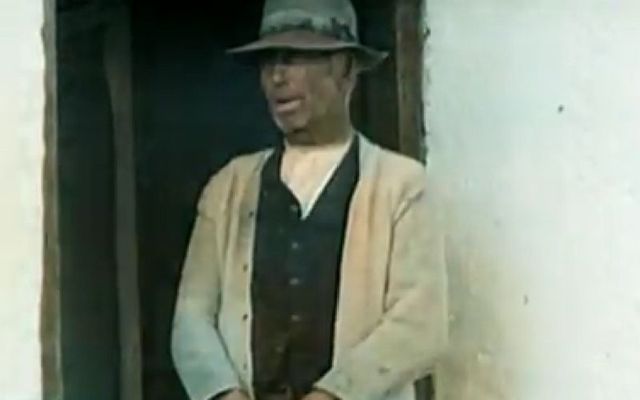 Can you help identify this man? A colorized video of a County Clare man searching for his son in the United States in the 1920s has gone viral on Twitter.

Posted by the "Old Ireland in Colour" Twitter account, the 40-second video features a discussion between a local man from Ennistymon and interviewers from the United States.

"Do any of ye know him?" the man asks while looking directly into the camera.

"He's a policeman in New York. His name is Pat O'Reilly."

Earlier in the video, the man provided the interviewer with directions to Lahinch.

John Breslin, an NUIG academic, who produced the "Old Ireland in Colour" books with Sarah Anne Buckley, colorized the footage and is currently seeking to identify the man in the video and his son in New York.

Based on the information provided about the man's son, Breslin has estimated that the man is Charles O'Reilly, a tinsmith who lived on Bagberry Street, in Ennistymon. Charles O'Reilly's son, Patrick, was also listed on the 1911 census.

"Given the directions given by the man to Lahinch, and matches in the last census we can see (1911) for Patrick O'Reilly's in Clare, one theory is that it is the son of Charles O'Reilly of Bagberry/Bogberry St," Breslin told IrishCentral.

However, he said he is not 100% sure, adding that he needs to track down his son in order to prove his theory.

A number of people who follow the "Old Ireland in Colour" Twitter page have been trying to track down Pat O'Reilly since the video was published.

Breslin revealed that one follower has unearthed a Patrick F. O'Reilly, who lived at 128 West 83rd Street, in New York City, and joined the NYPD as a patrolman on March 26, 1924. However, Breslin has not been able to find any links between Patrick O'Reilly, in New York, and Charles O'Reilly, in Ennistymon.

There's a clue in the name and occupation of his son...

The video has been viewed more than 200,000 times since it was posted on Oct 17, with many people remarking on the heartbreaking reality of immigration in the early 20th century.

"And of course, the sad part of this is that once his son left for work, he probably never saw him again. A letter perhaps, but probably never got to see him again," one Twitter user said.

"Glad those times are long gone when people left for America that part of their life ended. It was like a death," said another.

“Death Census”: Understanding Ireland’s Famine at the level of the rural poor