In 1963, Vaughn Meader won the Grammy for Album of the Year for his comedy record "The First Family," a spoof on the Kennedys. 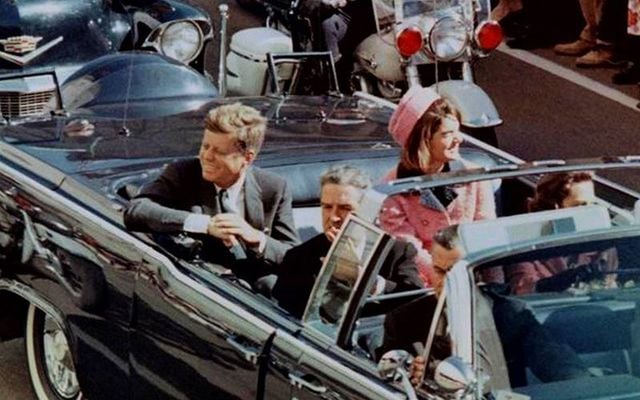 John F Kennedy and Jackie in the motorcade on that fateful day in November 22, 1963.

In May 1963, JFK impersonator Vaughn Meader won the Grammy for Album of the Year for his comedy record “The First Family,” a spoof on the Kennedys, and was one of the nation’s most popular entertainers in the nation. Later that same year, in November, President Kennedy was assassinated in Dallas, ending Meader’s career and sending his life into a tragic downward spiral.

The year before it won the Grammy, “The First Family” had been the fastest-selling album in the history of the record industry, selling more than a million copies in its first two weeks.

Even Kennedy seemed to enjoy the album, giving copies of the record as Christmas presents and greeting his audience at a Democratic Party event saying,”Vaughn Meader was busy tonight, so I came myself.”

Suddenly famous, Meader was profiled in Time and Life magazines, and appeared on network television variety shows such as The Ed Sullivan Show and The Andy Williams Show.

After the assassination, the popular album was pulled from stores, along with its sequel, as Cadence Records didn’t want to appear to be making money on the murder of the president. Meader’s gigs were canceled and his career was effectively over.

In an opinion piece for The New York Times, Jennifer Finney Boylan  recalls meeting Meader in the late 1990s in Hallowell, Maine. By that time, he had for the most part fallen off the cultural radar and was playing ragtime piano in a bar called the Wharf. He had dropped the Vaughn from his name and went by his first name Abbott. And although he was beloved by many in the community, he had developed a serious drinking problem.

Read More: 5 things you might not know about John F Kennedy’s assassination

"…once, when I prepared to interview him, I was advised to book our conversation for breakfast, because by late morning 'he kind of heads downhill. '"

Meader asked me, "Did I ever tell you how I got murdered in Milwaukee? I got into a cab, November ’63. The cabby said, 'Did you hear about Kennedy in Dallas?' I said to him, 'No, how does it go?' I thought he was telling me a joke."

It wasn’t a joke.

She goes on to say that despite being seen as a tragic figure, Meader was looked after by the Hallowell community.

One man came over as we ate our breakfast and asked Meader if he needed any money; when he admitted that he did, the fellow excused himself, went to a nearby A.T.M. and came back with “enough cash to float you for a little while.” Later, as we walked through town, many people stopped to greet him by name and to wish him well.

… Being loved and protected by people in a small town might not seem to be as glorious a state as, say, being on “The Ed Sullivan Show.” But, as my mother used to say, it’s not nothing. Meader, who died in 2004, wasn’t dear to people in Hallowell because he’d once done an impression of someone else; he was loved for who he was — a battered, imperfect soul, still in the throes of becoming himself.