Did you know that the "F" in John F. Kennedy's name comes from Bruff in County Limerick? 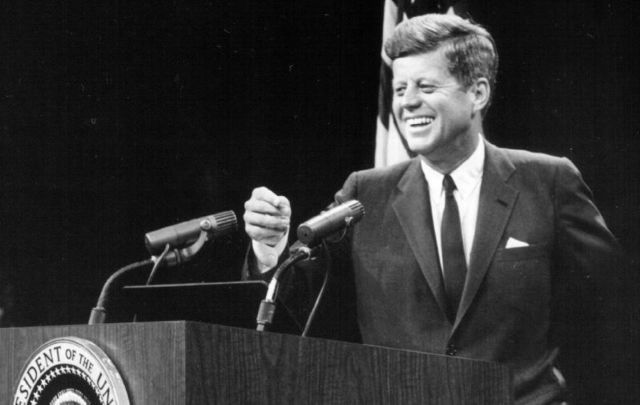 Kennedy has strong Irish ancestry through ancestors from Wexford and Limerick. Getty

The ruins, which date back to the 1820s, were uncovered outside the Limerick town of Bruff; a town that produced three of Rose Fitzgerald Kennedy's grandparents.

The farmhouse was formerly the residence of Mary Lenihan - one of JFK's great-great-grandmothers - who moved out of the cottage in 1828 to marry her neighbor Edmund Fitzgerald. She gave birth to her daughter Mary - Rose Fitzgerald's paternal grandmother - in 1832 but is thought to have died shortly afterward.

The ruined cottage, located on Palatine Road outside Bruff, had been hidden by trees and bushes for decades, while trees were observed to be growing through the cottage's floors.

Jean Kennedy Smith and Caroline Kennedy both visited the suspected site of the Fitzgerald family homestead in the past, but the recent discovery marks the first physical evidence of the surviving ruins, according to the Irish Independent.

While John F. Kennedy's Irish ancestry is often linked to the Wexford town of New Ross after his great-grandfather Patrick Kennedy left the town during the Famine, it is the Limerick Town of Bruff that provides the "F" in Kennedy's name.

Thomas Fitzgerald, JFK's maternal great-grandfather, emigrated from Bruff to Boston in 1852, laying the seeds for one of the most politically powerful families in American history.

In 2019, the town of Bruff unveiled a statue of Kennedy holding his great-grandfather's bible outside the Thomas Fitzgerald Centre in the town.

Local historian Declan Hehir traced the origins of the ruins back to John F. Kennedy by checking 19th-century land registries.

Hehir told the Irish Independent that he had to look up Limerick Tithe Applotments from Bruff Civil Parish in 1833 to discover that the Lenihan family lived in the house.

Realizing that Mary Lenihan had married Edmund Fitzgerald, Hehir put two and two together to trace the homestead back to the famous Irish-American president.

Meanwhile, Mark Nagle, the Chairman of the Cruff Community Council, noted the irony of the discovery at a time when America had just elected another Irish-American president.

"It's ironic that the time the house is uncovered coincides with a week when the whole of Ireland is transfixed by the election in the US and a win for another Irish-American whose ancestors left just after the Famine as well," he told the Irish Independent.