New research has found that smoking was rampant among Irish during the time of the famine, and the majority of adults had rotten teeth due to the habit. 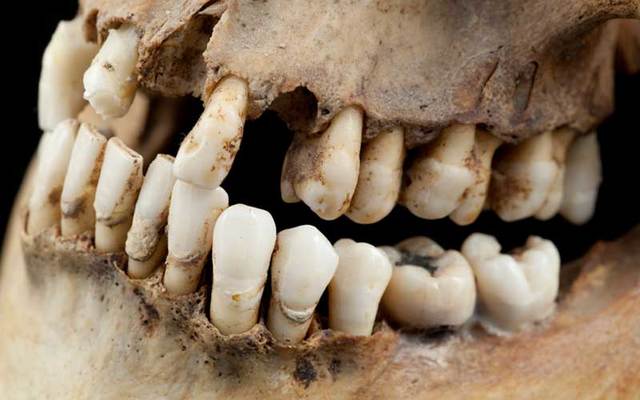 A skeleton with rotten and missing teeth. Getty Images

New research has found that smoking was rampant among Irish during the time of the famine, and the majority of adults had rotten teeth due to the habit.

A study carried out by leading bioarchaeologist Dr. Jonny Geber examined the teeth of 363 impoverished Irish men and women who died in the Kilkenny Union Workhouse from 1847 and 1851. Nearly eight out of ten of the remains showed evidence of tooth decay and over half the adults were missing teeth and nearly all showed up a build-up of tartar, the Irish Mirror reports.

The research was carried out in Queen’s University Belfast and the University of Otago.

Read More: Mid-famine Irish revolt against British comes to an end in a cabbage patch

Dr. Geber believes the condition of the teeth was more likely caused by widespread pipe smoking than diet.

He said: “Our study shows that it is not only diet that affects your oral health, but many other factors – and we argue that smoking was a major contributing factor in the Kilkenny population sample.

“They are also unlike to have cleaned their teeth efficiently – as evidence by a lot of tartar build-up – so that is obviously also another contributing factor.”

During the Famine, the majority of Irish men and women smoked.

A large number of both male and female skeletons in the study showed clay pipe marks from clenching a pipe between teeth. According to literature of the time, many boys and girls in Ireland were smoking by the time they were 14-years-old.

“In the face of poverty and destitution, the horror of starvation and the mass death that occurred during the Great Famine, we might imagine that smoking would have been one of the comforts the poor could have enjoyed”, said the study, which was published by the American Journal of Physical Anthropology and co-authored by Dr Geber and Eileen Murphy.

Dr. Geber, a lecturer in Biological Anthropology at the University of Otago, said: “While this was a comfort that they felt they could enjoy, despite their dire living conditions, it is likely to have had a very negative impact on their oral health, and thereby made their lives even more difficult.

“Other than causing pain, having a lot of decayed teeth would make it difficult to chew and therefore eat ‘non-soft’ food, for instance.”

Dr. Geber told the Irish Mirror that he hopes the research will offer further insight into the link between smoking and tooth decay.