'From Decadence to Despair' maps out his meteoric rise to fame and dramatic fall from grace at Trinity Library’s Long Room. 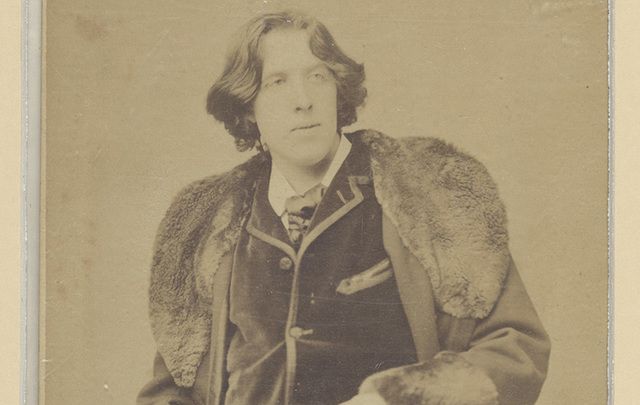 A portrait of Oscar Wilde.

The opening of the first major Irish exhibition on Oscar Wilde was marked by a public interview with actor and writer Rupert Everett, on Thursday, in Trinity College Dublin. The highly personal exhibition in Trinity’s Long Room, featuring letters, photographs, theater programs, books and memorabilia, maps out the Anglo-Irish playwright's meteoric rise to fame and his dramatic fall from grace.

Known for his biting wit, flamboyant dress and glittering conversation, Oscar Wilde is one of the best known Irish personalities of the 19th century and was one of the great writers of the Victorian era. Besides literary accomplishments, Wilde became a figure of some notoriety for his lifestyle and involvement in the ‘art for art’s sake’ aesthetic movement as well as the circumstances of his imprisonment and early death.

Now Trinity College Dublin is celebrating one of its most famous alumni with an exhibition entitled 'From Decadence to Despair' in Trinity's Long Room and an accompanying online exhibition.

The 30 items in the 'From Decadence to Despair' exhibition is drawn from the Library’s Oscar Wilde Collection, which is the only Wilde archive held in a public institution in Ireland. It is unique in its focus on the playwright's downfall and exile years. The collection was acquired by Trinity in 2011 from Julia Rosenthal, a rare book dealer and life-long collector of Wildeana based in London.

Program for The Importance of Being Earnest.

Commenting on the significance of the exhibition Librarian and College Archivist, Helen Shenton said “The Oscar Wilde Collection held here at the Library of Trinity College Dublin comprises items of great symbolic significance for Wilde’s biography. All the great Wilde biographers have made extensive use of the archive.  Now, with these new exhibitions, we are delighted to be able to bring this important collection to national and international audiences."

Curator of the exhibition and Assistant Librarian at Trinity, Caoimhe Ní Ghormáin added: “Oscar Wilde’s life and work continues to captivate academics and the general public. Through this exhibition we hope to celebrate the extraordinary legacy of Oscar Wilde and to shed further light on his remarkable journey from his student days in Trinity right through to his downfall and the sad circumstances in which he found himself during those final years in exile."

Highlights of the exhibition:

- A touching letter to his son Cyril, who was aged five at the time, about a meeting with the poet Mallarmé and Edgar Allen Poe’s book The Raven. This is the only known surviving letter from Wilde to either of his children. Wilde subsequently became estranged from his sons following his imprisonment in 1895 and never spoke to them after his release.

- A letter to his classics professor in Trinity, Sir John Pentland Mahaffy, the former Provost of Trinity, complimenting him as “my first and best teacher” and “the scholar who showed me how to love Greek things”. There is also a remarkable ink caricature of Wilde being rebuked for a midnight aesthetic meeting in the Suggestion Book of the Philosophical Society.

- A set of beautifully illustrated commercial trade cards inspired by Wilde’s famous “aesthetic tour” of America in 1882. Wilde was a master of self-promotion and his face was used more than any other celebrity in 1882 to promote a wide variety of products from cigars to kitchen stoves, even extending to bosom beautifiers and complexion enhancers.

- Wilde's silver calling card case, a supposed gift from his friend Ada Leverson presented to him on his release from Reading Gaol, inscribed “For Sebastian Melmoth from Sphinx”.

- A receipt for the sum of £25 received from his friend More Adey. With the money his friends purchased clothes, soap, scent and hair-dye so he could feel “physically cleaned of the stain and soil of prison life”.

- A sales catalogue of Wilde's books and household goods including inscribed editions of his parent's writings and his children's rabbit hutch. These effects were sold at the time of Wilde's trials in 1895 at the demand of his creditors.

- A moving letter from Wilde to his friend, the writer Eliza Stannard, written shortly after his release from Reading Gaol in May 1897. Writing from a hotel in Normandy, Wilde remarks, “of course I have passed through a very terrible punishment and have suffered to the pitch of anguish and despair” and refers to himself as “an unworthy son”.

“Oscar Wilde: From Decadence to Despair” at the Library of Trinity College Dublin will run until January 3, 2018. An online exhibition is also available at www.tcd.ie/library/exhibitions/wilde.

The Oscar Wilde Collection comprises items of symbolic significance for Wilde’s biography, such as a receipt for a loan of money he received on leaving Reading Gaol in 1897, and the only known letter written to his son, Cyril. Rosenthal purchased her first autographed Wilde letter in 1976 and she continued to collect over the following decades, gathering over 150 items, creating what is thought to have been one of the largest privately-owned Oscar Wilde collections in the world.

Detail of a letter from Oscar Wilde, to his son Cyril.

Now held in Manuscripts & Archives in the Library of Trinity College, it is the only Oscar Wilde archive held in a public institution in Ireland. The Oscar Wilde collection contains both manuscript and print materials, as well as items of memorabilia. There is a complementary collection of print material in the Department of Early Printed Books. Three items from the collection were loaned to a major exhibition in the Petit Palais Musée des Beaux-Arts in Paris in 2016. The exhibition, entitled Oscar Wilde: Insolence Incarnate, was co-curated by Wilde’s grandson Merlin Holland.

To mark the launch of the exhibition actor, writer and long-time Oscar Wilde fan Rupert Everett was interviewed by by Carlo Gébler, Adjunct Professor in Creative Writing at Trinity’s Oscar Wilde Centre for Irish Writing.

Throughout his film and stage career Rupert Everett has had significant engagement with the life and work of Oscar Wilde. He played the role of Lord Goring in a 1999 film production of ‘An Ideal Husband’ and Algernon Moncrieff in a production of ‘The Importance Of Being Earnest’ in 2002. More recently he played Oscar Wilde in David Hare’s 2012 stage production of ‘The Judas Kiss’ in London. Next year, he makes his directorial debut on ‘The Happy Prince’ a film about the last years of Oscar Wilde’s life in Europe, in which he also plays the starring role.

Rupert Everett and Judi Dench in the Importance of Being Earnest.

Rupert Everett shot to fame in 1981, when he appeared on stage as Guy Bennett in Julian Mitchell’s play ‘Another Country’, a role he repeated alongside Colin Firth in the 1984 film version, which saw him nominated for a BAFTA for Best Newcomer To Film.  Rupert has appeared in other prominent films throughout his career including ‘My Best Friend’s Wedding’, ‘Shakespeare in Love’, ‘An Ideal Husband’, the ‘St Trinian’s’ series and most recently ‘Miss Peregrine’s Home for Peculiar Children’.

Rupert is also a highly respected theatre actor, with many credits including ‘Pygmalion’, ‘Blithe Spirit’ and The Judas Kiss’. His 2014 role in ‘Amadeus’ cemented his reputation as one of Britain’s greatest stage actors. Rupert is also a TV and documentary filmmaker, whose work includes ‘The Scandalous Adventures of Lord Byron’, ’The Victorian Sex Explorer’, ‘Love For Sale’ and ’50 Shades of Gay’.

He has published four novels and two critically acclaimed memoirs ‘Red Carpets and Other Banana Skins’ and ‘Vanished Years’. Next year, Rupert makes his directorial debut on ‘The Happy Prince’ a film about the last years of Oscar Wilde’s life in Europe, in which he also plays the starring role.