These shocking letters show that violence against children was far from controversial and some thought it beneficial. 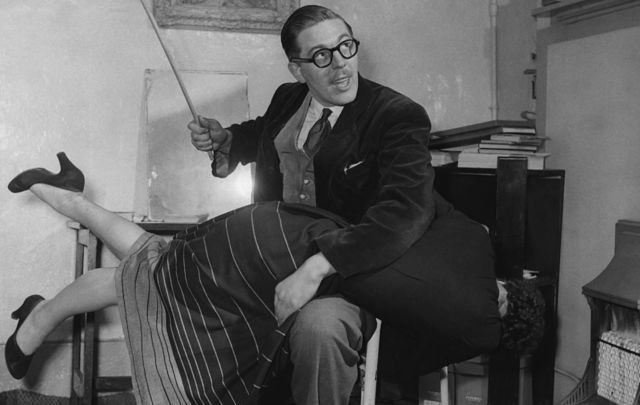 Eric Wildman, demonstrating his 'over the knee position with the help of a female volunteer, circa 1950. Wildman was the founder of the National Society For The Retention Of Corporal Punishment. Getty

“Anyone who has had any experience of children, knows that the only way to deal with a refractory girl (no matter how old she is) is by a sound spanking.’’’’. I have seen my own sisters beaten by every form of appliance from a hair-brush to a cane, and always resulting in their benefit.”

What a strange place Ireland long ago was was, back in the 1930s. The question of corporal punishment was hardly controversial. It was good for school kids, no matter their age, and especially for females even those as old as 19-years-old apparently.  The more beatings the merrier most of the populace seemed to agree. One person writes the proper punishment was to turn the girl's uniform inside out and make her stand in front of the class. Charming.

Read these letters and don’t be so surprised about punishment for unmarried mothers, the Mother and Baby atrocities or attitudes to women that were beyond Victorian exploded into massive scandal decades later.

The following correspondence from the letters pages of the Dublin Evening Mail sent in by a reader and discovered on the website corpun.com certainly makes that evident.

My daughter who is 17 years old is attending a boarding school, and is on holidays at present. When we were at the seaside last week I noticed a black mark showing just below her bathing costume on her leg, and when I inquired if she got a bruise or an insect sting, she blushingly told me she was spanked before leaving school. When we got home I made a further examination, and to my horror I found four similar marks on her hips. I was so annoyed that I immediately sent for a doctor, who examined her and assured me that it was not serious, and the marks would leave in a short time.

He questioned the girl, and she told us that recently a film book and novel had been smuggled into school by another girl, and that most of the girls got a look at them; they were passed to her one day and she was caught reading them one night. The next morning the mistress sent for her and told her she would be punished if she did not tell where she got them. She refused to do this, and was then brought to her room, where two other teachers assisted in removing her knickers, putting her across the bed, and while they held her there, the mistress gave her twelve strokes of a strap on the hips. The other girl, who later admitted getting the books, received fourteen strokes of birch rods for the terrible crime ...

Is there no law in the country to prevent such brutality? It is not a matter that a girl will willingly report to her parents, especially a girl of 17, and I think these schools should be exposed for such punishment, as I now understand that girls are spanked on the bare hips for the slightest offence against the school rules in this school. The doctor told me that complaints of a similar kind were reported in the Evening Mail some time ago, and advised me to report the matter to the Board of Education. It is certain that my daughter will not return to that school, and if girls would only speak up, I am sure that something could be done to stop it for all time.

I have read the letter of "M.C." and I believe it to be true. I am home on holiday from a boarding school, where I was severely punished by the headmistress for not having my work done; I was stripped and given ten strokes. I still have some marks, which do not appear to be going away. I am ashamed to go to my doctor about them. My headmistress punished me for the slightest thing, and many girls were left sore by her. Could this treatment not be stopped? I am 18 years of age, and I dread the thought of returning to this school next month.

Perhaps "M.C." of Athy, now that he (or she) has had time to calm down, will tell us where the "brutality" in giving a good strapping to a girl of 17 who is disobedient and undisciplined comes in. There is no healthy-minded girl who will be one bit the worst of being stripped and flogged when she deserves it; and many parents would be very glad to find this practice substituted for the eternal nagging that makes life bitter and intolerable in some boarding schools.

I see that certain people are again kicking up a fuss about corporal punishment. Nowadays we hear a lot of stupid talk about adopting a psychological attitude to mischievous children, and to try to talk them into better behaviour. Anyone who has had any experience of children, knows that the only way to deal with a refractory girl (no matter how old she is) is by a sound spanking. It is ridiculous to suggest that any sane headmistress would strip and flog a girl, to satisfy her own brutal instincts. I have seen my own sisters beaten by every form of appliance from a hair-brush to a cane, and always resulting in their benefit. No parent or school authority is likely to thrash any girl for their own gratification.

I am very glad your newspaper has brought into the realm of discussion the above subject. I am headmistress of a school, in which there are 175 girls from 8 to 19 years, and I find it necessary to spank on the bare seat for disobedience. Last term I caned a girl of 19 years for giving trouble, and I must say it did her good. How is it brutal to punish in that way? If I hit the girls on the head, or continually nagged at them, I should be the victim of criticism. Your correspondent, "Parent," is very reasonable in her remarks. No amount of criticism will restrain me from inflicting capital [sic] punishment in the way I have done. I detest using the lash, but I have no other alternative.

It is interesting to note the attitude of different classes of society towards the question of corporal punishment at school. The very poor parents resent it in any shape, and hire them to the slum schools, arms akimbo, to give "a bit of their minds" to the teachers. The "new rich" share their mentality, but are sufficiently careful of their dignity to not let themselves go in the same way. When their children, however, get to the "boarding school" age, they cannot understand the "indignity" of having them stripped and caned for wilful disobedience or other faults that show the want of that self-control which it is one of the principal objects of education to inculcate. "Their doctor" must be sent to assure them that their dear children's posteriors have not been permanently damaged. In a few more generations their descendants will have learnt that punishment is applied on the bare buttocks because it is perfectly safe there, as well as being painful and humiliating to the culprit. The higher middle and professional classes, who build and maintain empires, and do most things worth doing in the world, take it as a matter of course, and are pleased that their boys and girls are flogged into the solid virtues necessary to continue the work. Their dignity is safe; indignity to them is in doing what is wrong -- not in being punished for it.

My reaction to the letter in Saturday's Evening Mail, and signed "Schoolmistress", was that I felt sick, and I wondered what the woman is like who can write so dispassionately of her conduct towards her pupils. A schoolmistress should be a lady in thought and deed. There is something revolting about her idea of discipline. Surely, there must be other ways of dealing with refractory children. Perhaps the punishment meted out to a little girl in a school in Ireland (not Kamchatka) may be preferable, where the schoolmistress put her dress on inside out and made her stand in the middle of the room for the other girls to gaze at. Ingenuity could hardly go further. God help our children.

I quite agree that corporal punishment is necessary for some girls, but surely the natural modesty of those over 15 or 16 years of age should be taken into account. The wearing of a bathing dress or other thin garment will make no difference to the severity of the punishment. Women like "Headmistress", who is probably hated and feared by the majority of her pupils, will eventually kill the boarding school system. I am told that in the English schools girls over 16 rarely receive corporal punishment. Now, I am a Protestant, neither "very poor" nor "new rich", in fact, a member of the professional class, and yet I dislike the thought of my girls leaving school embittered by excessively humiliating punishments. Therefore, I am sending them to a boarding school conducted by nuns, who use neither strap nor cane, and I am convinced that there they will learn both self-control and the "solid virtues necessary to continue my work" ("B.R."). I would recommend both "Headmistress" and "B.R." to read any standard book on child psychology, when they will learn that humiliation breeds hatred and a desire for revenge.