Eugene Lynch was shot dead on Friday, April 28, 1916, and was buried in an unmarked grave in Goldenbridge Cemetery. He was one of 40 children killed during the Easter Rising. 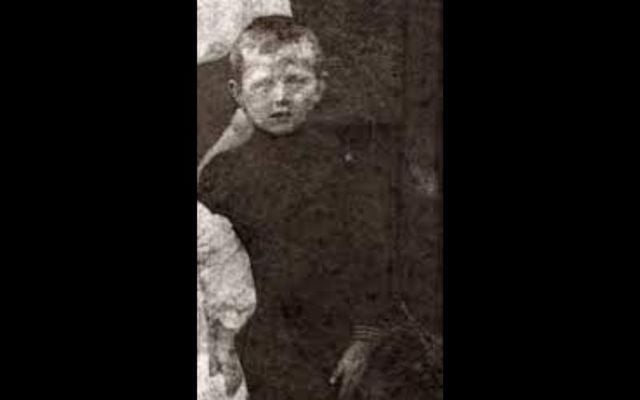 Eugene Lynch (8), from Inchicore, Dublin, was playing football with other children outside Dublin’s Richmond Barracks when he was shot by a British soldier on April 28, 1916.  Facebook

An 8-year-old boy killed during the Easter Rising who was buried in an unmarked grave has been given a gravestone 102 years later.

Eugene Lynch, from Inchicore, Dublin, was playing football with other children outside Dublin’s Richmond Barracks when he was shot by a trigger-happy British soldier on Friday, April 28, 1916. He was carried to his grandmother’s public house nearby and died on a table in the pub.

Two days later, on Sunday, April 29th, the day after the rebels surrendered, he was buried in a wooden box in Goldenbridge Cemetery in an unmarked grave with other members of his family. His funeral cost £2.

Eugene was one of 40 children who died during the Rising.

A new headstone provided by Glasnevin Trust was unveiled in 2018 to mark Eugene’s grave. Hundreds gathered for the dedication of his gravestone, including members of his family and many Inchichore schoolchildren.

Hundreds gather for the unveiling of a headstone dedicated to one of the children killed during the #1916rising Eugene Lynch pic.twitter.com/cFW5ihdXLY

RTÉ broadcaster Joe Duffy, whose book The Children of the Rising highlights the stories of the children killed during the Easter Rising, recalled the circumstances of Eugene’s funeral.

“Here he played and here he is laid. At 11 o’clock on a Sunday morning as they carried that box through that gate, we reckon there were three people at his funeral,” said Duffy.

Pupils from Scoil Mhuire Gán Smál, a school in Inchichore, read a poem in honor of Eugene, beginning: "For far too long in Inchicore, I did not know your name / The Rising’s History was peopled by those men of greater fame."

Musician Declan O’Rourke sang his song The Children of 16, and then a piper led the Lynch family to the grave for the unveiling.

Glasnevin Trust chairman John Green said: “Those people who died in 1916 have become all the more real to us all. No book has had a greater impact than children of the Rising,” he said.

Footage from the ceremony for Eugene Lynch in 2018 can be viewed here, courtesy of Ros-Linn Video Productions and Ballyfermot Heritage Group: