Biggest collection of Celtic coins ever discovered is worth $12 million

This huge collection of Celtic coins, found on the island of Jersey in 2012, was awarded a Guinness World Record and is thought to be worth over $12 million. 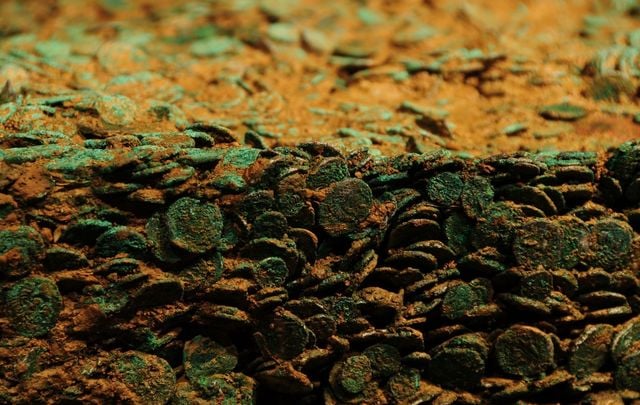 Coins from a large Celtic hoard found from c50BC. Getty

A collection of Celtic coins in a Jersey museum has received a Guinness World Record for the largest collection of Iron Age coins discovered in the United Kingdom or Ireland.

The total number of coins found in the huge hoard was a staggering 69,347, overtaking the previous record of 54,951 coins held by a collection in Wiltshire.

The previous record had been held since 1978 after the hoard was discovered at the site of the former Roman town of Cunetio near to Mildenhall.

Archaeologists Reg Mead and Richard Miles first discovered the buried treasure beneath a hedge in Jersey, in 2012.

The archaeologists became interested in the site when they read a report in the 1980s about a Jersey farmer who had discovered silver coins in an earthenware pot while pulling out a tree from a hedgerow.

Four decades of painstaking research later, they uncovered the buried hoard, believed to be worth roughly £10 million ($12m).

Some of the coins are currently on display at La Hougue Bie Museum, in Jersey, in the hope that they will help people to better understand the systems of currency used by Celtic civilizations.

Olga Finch, Curator of Archaeology for Jersey Heritage, said that the world record put Jersey, the largest of the Channel Islands, on the world stage.

"Once again, it puts our Island in the spotlight of international research of Iron Age coinage and demonstrates the world-class heritage that Jersey has to offer," Finch said to the Telegraph.

The collection is thought to date back to around 50BC and consists of bracelets, fine silver wire, gold torques, sheet gold and a number of glass beads as well as coins.

Experts believe that it was buried by members of a Curiosolitae tribe fleeing  Julius Caesar 's army.