Billy the Kid and Pat Garrett photo, bought for $10, is worth millions say experts

Found in a flea market in NC six years ago, the tintype group photos of these bad hombres could be worth $5 million. 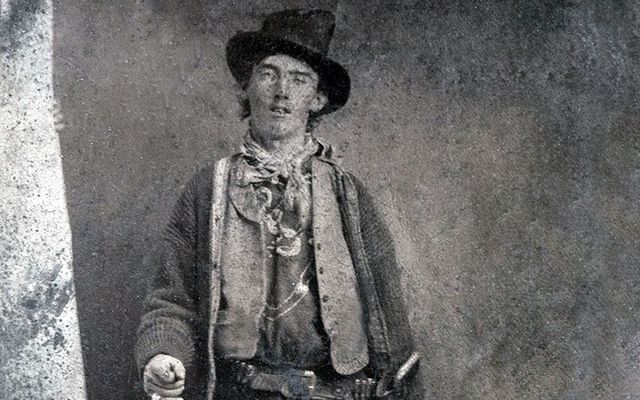 Found in a flea market in NC six years ago the tintype group photo of these bad hombres could be worth $5 million.

A tintype photograph bought for $10 at a flea market in North Carolina six years ago almost certainly includes Billy the Kid and the sheriff who shot him, Pat Garrett, two of the most famous Irish Americans of all time.

A lawyer named Frank Abrams bought the tintype for $10 and hung it in a bedroom.

What he did not know was that the second man from the left is almost certainly Billy the Kid, and the man on the far right is another famous Irish American, Pat Garrett.

According to the NY Times it was only when Abrams read that an original picture of Billy the Kid is worth up to $5 million that he really studied the era during which the tintype was taken.

Armed with new knowledge he recognized Billy the Kid’s future killer right away. “Oh my gosh,” he recalled saying. “That is Pat Garrett in my picture.”

Extremely rare photo of Billy the Kid and Pat Garrett surfaces, could be worth millions #FNTech https://t.co/adtsn7S895

William Dunniway, a tintype expert, confirmed the picture was taken between 1875 and 1880 and he and a forensics expert concluded it was indeed Billy the Kid and Pat Garrett.

Local historian Robert Stahl confirmed that Garrett and Billy the Kid, who also went by William H. Bonney and Henry McCarty, were friends at one point and gambled together.

No one would be more surprised than Billy the Kid that his photograph with Garrett could sell for $5 million at an auction.

Billy, who was about 20 at the time, probably paid 25 cents to have the picture taken around 1879 with his buddies. The photograph was a tintype, which is an early type of photography that used metal plates.

An earlier photograph of Billy went for $2.3 million to collector William Koch, who already has a vast collection of Old West memorabilia, which also includes General Custer’s rifle, as well as guns owned by outlaws Frank and Jesse James.

By most accounts, Billy the Kid was born Henry McCarty in New York City on November 23, 1859. Little is known about McCarty's origins, but many reputable scholars of western history "contend that he was born on the eve of the Civil War in the bowels of an Irish neighborhood in New York City at 70 Allen Street”

In 1870, Catherine moved to Coffeyville, Kansas (although some accounts say she moved to Indiana) with Henry, as well as his brother Joseph, and Joseph’s father William Antrim, whom Catherine later married.

The family later moved to Silver City, New Mexico where Catherine ran a laundry and Antrim worked as a miner. Catherine suffered from tuberculosis, a disease that was rampant in New York City at the time, and it was thought that the drier climate would help her condition. Catherine died, however, in 1873.

According to the website Badhombres, Henry, who was 15 at the time of his mother’s death, didn’t get along with his stepfather and was soon out on his own. He got in trouble for petty theft, but he was also a good student who, according to one teacher, wasn’t in more trouble than any other kid. A reader, Billy the Kid apparently had a penchant for dime novels, which is fitting, as he would later inspire dozens of western adventure stories and movies.

The first time Henry McCarthy was called “the Kid” was when he killed an Irishman called Frank P. “Windy” Cahill who had been drinking in George Adkins’ Saloon in Camp Grant, Arizona. Cahill, a huge man, and a blacksmith by trade, called Billy a pimp and hit him across the head, knocking him to the ground. Billy drew a gun and shot Cahill in the stomach. He died a day later.

After that, Billy was on the run and ended up back in New Mexico where he became embroiled in what was known as the Lincoln County War.

According to Dermot P. Duggan, writing in Irish America (October 1991), two Irishmen, L.G. Murphy and J.J. Dolan, owned huge cattle ranches and controlled the town of Lincoln, including the sheriff William Brady. Murphy-Dolan were big suppliers to the U.S. Army and were stealing cattle from another big ranching baron, John Chisum, to fill some of their orders. Billy, after initially working for Murphy-Dolan, met up with John Tunstall, an Englishman who had moved to Lincoln in 1876 and started a ranch on the Rio Felez a few miles from the town. He has also teamed up with Chisum against the Murphy-Dolan outfit.

Billy and Tunstall developed a bond. Tunstall was impressed with Billy and became a father figure to the boy. However, Sheriff Brady’s men, probably at Murphy’s instigation, killed Tunstall in cold blood in February 1878. Billy swore revenge and eventually (with the help of his gang) killed several of Brady’s men. On April 1, 1878, Brady himself was killed.

The tit-for-tat killings went on for months. The Governor of New Mexico, Lew Wallace, a former General in the Union Army, put up a reward of $5000 for the capture of Billy. But he also met with him to work out an amnesty in return for his testifying against the cattle thief J.J. Dolan. (His partner L.G. Murphy had died of pneumonia). Billy’s testimony helped convict Dolan, but Wallace couldn’t come through on his promise of amnesty for Billy and, shortly after testifying, Billy made his escape.

In 1880, fellow Irish American Pat Garrett was made sheriff of Lincoln County and he managed to capture Billy, but he couldn’t hold him for long. Billy shot dead two deputy sheriffs and made his escape. A couple of months later, on July 13, 1881, Billy had another run-in with Garrett at the house of his friend Pete Maxwell and Garrett shot him dead. Billy was unarmed.

Billy the Kid’s death turned out to be merely the first act of his longer, mythic life. His exploits would inspire countless books, plays and radio specials. Meanwhile, generations of Hollywood’s most celebrated talent created films based on Billy the Kid. In the 1930s and 1940s, King Vidor, Wallace Beery, Roy Rogers, Buster Crabbe and Howard Hughes were among the actors and directors who made films about Billy the Kid and Pat Garrett. Now it seems there is a picture of them together, that is likely worth $5 million at least.