Astonishing Ned Kelly photo found after over a century

Only a few known photos exist of the icon of working-class Australia. 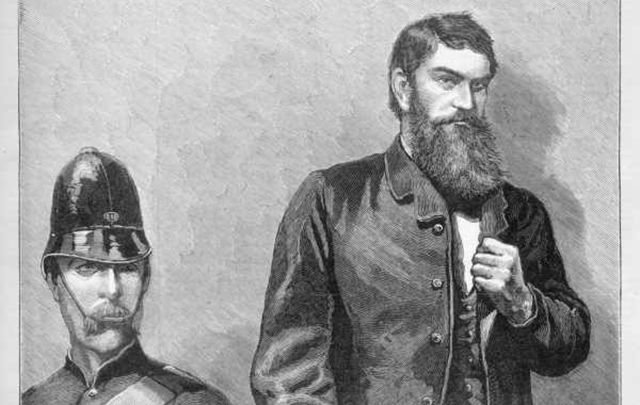 "Ned Kelly in the Dock - A Scene from Life" Ned Kelly in the dock during his trial. Wood engraving published in The Illustrated Australian News. Public Domain / WikiCommons

Although regarded as one of the great legends - or villains - of 19th century Australia, photos of bushranger Ned Kelly are few and far between. But to the delight of historians, a rare picture of the son of an Irish convict from Tipperary have reemerged.

The ancient black and white image shows two rugged young men cutting timber in the Australian bush and experts are confident that the bearded man, hand on hip, is none other than Kelly himself.

Photo authentication expert Gale Spring of Melbourne’s RMIT University told The Australian that there was a “soft eight” out of ten chance that the photo was Kelly, in which case it would be one of only six known photos of the man many regard as an Antipodean Robin Hood.

The image first came to the attention of Ned Kelly enthusiast Matt Shore after it appeared in an auction catalog in 2002 but he was unable to find out who bought it.

“It sounds made up, but it is just gripping. It surfaced in 2002 and after the auction, I always wondered where it went. I wondered if it was Ned but no one knew where the photo was, so we couldn't test it,” Shore told the Daily Mail Australia.

However, 14 years later, Kelly’s relatives got in touch with a delighted Shore.

“We got a call by the Kelly family and they said we have this photo and we have always believed it to be Uncle Ned. I was looking at it an hour or so later and I was hesitant. It had his facial features, but it didn't just pop out at me,” he said.

“I am not a qualified historian I am just an enthusiast, but after closer examination and playing around with this photo it took my breath away. The face just matched. In my eyes I thought this could be him so I contacted the family and told them we needed experts to look at it.”

They’ve put the picture on display in the Ned Kelly Vault in Beechwood, Victoria and hope members of the public might be able to help them work out other facts about the photo.

“We hope the public can help solve all the puzzles that relate to it because there is still so much we don't know,” Shore said.

“We would love to know who took it and where it was taken. There are some growing evidence that the other man in the photo is [his brother] Dan Kelly.”

Edward “Ned” Kelly was born in the Beveridge in the British colony of Victoria in 1854 (47 years before the colonies of the Australian continent federated into one country). His father John was from Co. Tipperary and had been sentenced to transportation to modern day Tasmania in 1841 for the theft of two pigs.

After his release in 1847, he moved to Victoria and married his employer’s daughter, Ellen Quinn, in 1951.

Their notorious son Ned first came into contact with the law aged just 14 years old when police charged him with robbing and assaulting a pig trader called Ah Fook. He was released but the local police had formed an intense dislike of the teenager.

Still a teenager, Kelly became friends with Harry Power, a bushranger - the Australian equivalent of a Wild West outlaw - from Waterford. The two began robbing strangers they met on the highway and Kelly quickly became infamous in the colony of Victoria.

A price was put on his head and local newspapers breathlessly chronicled sightings of the charismatic career criminal.

After many escaping the clutches of Victoria’s police numerous times, Kelly’s seemingly endless supply of charm ran out in June 1880 after a dramatic siege in the small bush town of Glenrowan. Every single one of Kelly’s mates died and he alone survived to face trial for numerous crimes, including three murders.

The judge, Corkman Sir Redmond Barry, found him guilty of the murder of Constable Lonigan during the siege and sentenced to be hanged by the neck until dead.

An estimated 30,000 people signed a petition asking for a commutation of his death sentence, but the colony’s Government were unmoved and he was executed by hanging in Melbourne jail on November 11, 1880.

Death did nothing to diminish his popularity amongst the colony’s working class - particularly the Irish Catholic community - many of whom regarded him as something of a hero.

Historian Amanda Kaladelfos wrote, "Kelly articulated a struggle between rich and poor that resonated with many at a time when the Victorian government's land policies disadvantaged small farmers.

“[He] was one of the last bushrangers, and he certainly was one of the most extravagant. Kelly fits with [Australia’s] most iconic national types – the larrikin, the bushman, and the underdog."

Today he remains an icon of Australian history; his story was told by dancers at the opening ceremony of the 2000 Sydney Olympic Games and the small towns that he lived in in the Victorian bush have seen huge numbers of tourists pass their way, intend on learning about his life and honoring his memory.