Bataireacht, which dates back to the 16th century, is a blend of boxing, fencing, and grappling fought with a long wooden stick with a bulbous head - known as a shillelagh. 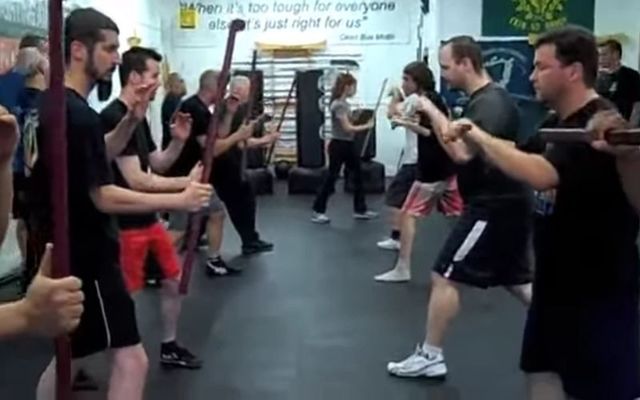 An ancient Irish form of stick fighting that was once so dangerous it left many fighters dead has been making a comeback over the past decade, albeit in a safer and more controlled environment.

Bataireacht, which dates back to the 16th century, is a blend of boxing, fencing, and grappling fought with a long wooden stick with a bulbous head - known as a shillelagh.

Bataireacht's popularity surged in the 1700s after the British authorities banned Irish people from carrying weapons. Instead, the Irish protected themselves with walking sticks which were actually shillelaghs.

By the 19th century, bataireacht had become so popular that it was being taught in Irish schools and had become central to Ireland's identity.

However, the impact of the Great Hunger in the mid-1800s coupled with a changing attitude toward fighting saw bataireacht's popularity plummet by the turn of the 20th century.

Bernard Leddy, an Irish martial artist with more than 40 years of experience, is at the forefront of bataireacht's present-day revival.

Leddy, who runs a gym in County Leitrim, came across the practice while watching videos online more than a decade ago.

Upon further investigation, he discovered Glen Doyle, a Canadian of Irish ancestry who was one of the few remaining bataireacht instructors in the world.

Doyle, who comes from a long line of traditional stick fighters, trained Leddy during a specialized training program in Newfoundland and Leddy has now become a coach, helping to spread the practice around the world.

The ancient practice of bataireacht was once considered lethal and dangerous, although its present-day form is relatively safe when practiced in gyms under the supervision of experts.

Leddy has overseen the creation of roughly 50 bataireacht schools and study groups in Ireland, the UK, the US, Taiwan, Mexico, the Czech Republic, and Egypt. He told the BBC that has not been surprised by the growth of the ancient Irish martial art.

"Ireland’s ancient martial art of stick fighting is making a comeback," Leddy said. "Because once people realize how effective bataireacht is, they immediately want to know more. In 20 years, I want it to be in every hall in Ireland, if not the world."

"The spirit of 'Shillelagh Law' was to always be willing to go out and fight, and die if necessary, to maintain your personal or family or faction reputation," Hurley told the BBC.

Carolyn Conley, a professor emerita of history at the University of Alabama and an expert on crime in 19th-century Ireland, told the publication that brawls were often recreational, helping to fill a void of entertainment in impoverished parts of rural Ireland.

Hurley said bataireacht was deeply personal for the people who practiced it, stating that it was especially important in an era when wealthy British elites controlled large portions of the Irish countryside.

"Bataireacht's not about trophies and titles, it's about surviving, self-defense, and defending those you love," Hurley said.

Hurley explained that many Irish people mistrusted the British legal system in the 19th century, with many people settling their disputes outside of court, sometimes using bataireacht.

Bataireacht and other similar sports became a distant priority for those who were hardest hit by the Irish Famine, who were often among the poorest in Irish society, and those most likely to practice bataireacht.

It failed to regain its popularity in the second half of the 19th century and subsequently faded into distant memory.

However, it has made a stirring comeback in the past ten years thanks to its simplicity, making it suitable for a wide range of people.

The sport is uncomplicated and involves short and quick jabs mixed with an occasional explosive strike.

Fighters hold the shillelagh in one or both hands, using the stick to hit their opponents on the head or body and to block strikes.

Bataireacht fighters are also permitted to punch, kick, and grapple with each other.

"We get in close, whereas other stick-fighting systems stay further away from the aggressor," Leddy explained.

"But we can also use the length of our stick to strike from the outer range and maintain a safe distance."