Meaner than McGregor, meet the Irish MMA fighter who took on gangsters, Nazis and foreign spies. 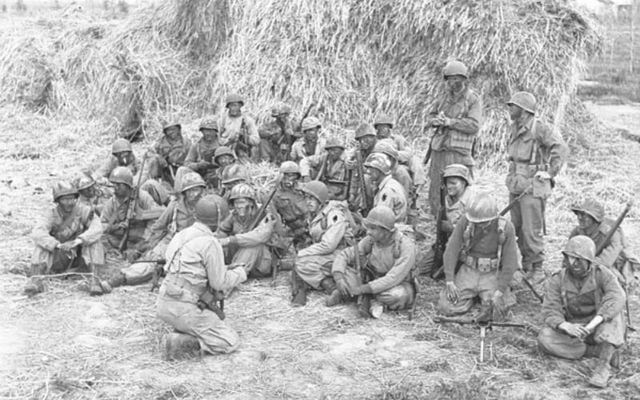 With two world titles to his name and a high-profile fight against Floyd Mayweather under his belt, Conor McGregor is undoubtedly Ireland's most famous ever MMA fighter, but another man, more merciless than McGregor, can claim to be its deadliest.

The original ultimate fighter, he began his remarkable rise to seventh dan in Jiu Jitsu by keeping law and order as a cop in the back alleys of Shanghai, and his career reads like the biography for an Irish James Bond: intelligence officer shadowing communist agitators, handpicked member of the first SWAT team, hand-to-hand combat instructor for the OSS in WWII, army captain who led his Special Forces squad behind enemy lines, and finally, the man to whom the US Marines, US Air Force and even the CIA turned to learn new fighting skills during the Cold War.

Born to Francis O'Neill from County Laois, and his wife Mary (née Moore) from County Offaly, on March 21, 1905, at Newmarket, Cork, police service was always likely for Dermot as his father was a District Inspector with the Royal Irish Constabulary (RIC).

In 1924, he signed on as a cabin boy on a steamer, jumping ship 12,000 miles later when they arrived in Shanghai where his oldest brother Frank worked for a bank.

Shanghai was divided in every sense, made up of the Chinese city, the French 'Concession', and the International Settlement, which was part of China but since 1863 had been run by the British to protect their business interests and those of America.

In the International Settlement, the British and Irish held most of the top positions in the Shanghai Municipal Police's (SMP) Foreign Branch while the Japanese worked alongside Germans, Sikhs, Chinese, and 'White' (pro-Tsar) Russians in the 14 stations, battling groups like the Green Gang who earned millions controlling drugs, prostitution, and arms smuggling, using martial arts, blades, and firearms to protect their rackets.

O'Neill's family name and his nationality were a help when he answered the SMP's newspaper ad in 1925. Headquarters had sent cadets to the RIC for training, and long recruited directly from both that force and the Dublin Metropolitan Police (DMP) so just six weeks later this youngster, who wrote 'school' under 'Previous Employment' on his application, found himself on patrol for the first time, and inevitably in a gunfight.

A generation before, a tough young English patrolman named William E. Fairbairn found that the bayonet skills which won him fame in the Royal Marines were useless against skilled Asian gangsters trained in 'Kung Fu'. He spent two years training in 'Judo' with a local sensei, emerging a second dan black belt and introducing his simplified 'Defendu' to ensure the SMP could protect themselves.

Dermot, who had been a boxer in his teens, rose to sergeant within two years. By the 1930s he was a Sub Inspector shadowing foreign insurgents for Special Branch, and an expert in Jiu Jitsu, eventually studying under legendary sensei Tatsukuma Ushijima.

Corruption was widespread. Many of O'Neill's Chinese colleagues were gangsters, swearing oaths to brotherhoods similar to the Mafia. SMP Detective Lu Liankui, for example, became a key Green Gang boss.

The Settlement's Municipal Council turned a blind eye to the deliberate recruitment of such criminals hired to keep a lid on other gangs, but in the wake of 123 murders and almost 1,500 armed robberies in 1927 they demanded action.

Fairbairn had complete faith in O’Neill, and as the highest ranked non-Japanese in the world in his art, a natural choice for the unit's unarmed combat instructor. When he wasn't going out on raids, the Irishman trained the USMC 4th Marine Regiment, the 'China Marines', who sometimes supported the unit on missions.

By 1934, Shanghai had grown to the sixth-largest city in the world and the fame of the innovative Fairbairn, who some suggest was a model for Ian Fleming's' M' in the Bond novels, had spread too, his officers' tough-guy exploits filling newspapers and even a US comic book.

O'Neill's reputation also rose and in 1938 he accepted the job of Head of Security with the British Legation in Tokyo, where he earned his fourth dan black belt.

Back in Shanghai, Pat had regularly grappled with Judo students from the local Tung Wen College, well aware that his opponents were being trained as spies at a school with close links to Japan's secret societies, and the feared Kempeitai, Tokyo's version of the Gestapo.

Determined not to be trapped in Tokyo, on October 4, 1941, Pat smuggled himself onto a fishing boat, eventually reuniting with his brother Frank in Sydney just before the attack on Pearl Harbor, where he was soon telegrammed by Fairbairn urging him to join his old boss in the USA working for the Office for Strategic Services (OSS).

In May 1942, the Irishman found himself teaching agents at 'Camp X' just over the border in Ontario, Canada but soon became restless jumping at the chance to work with volunteers drawn from the US and Canadian armies with the 'First Special Services Force' (FSSF).

The FSSF's inspirational CO Lt. Colonel Robert Frederick, a major general in the United States Army during World War II, initially asked OSS head William 'Wild Bill' Donovan if he could borrow this valuable civilian for two months, and told Pat that he had 40 hours per intake to train not only the officers but 1,800 who enlisted in unarmed combat, knife fighting and SMP-style pistol shooting.

Pat soon realized he would need a system as good as Defendu, but more direct, dirty and evasive.

“The aim of hand-to-hand combat," he later told USMC Brass, "is to make every man a dangerous man, armed or unarmed”.

His trademark 'O'Neill to the nuts' of a Nazi sentry would ensure he would never father a son and he also combined brutal eye gouges, deadly punches to the throat and vicious stomps to form 'The O'Neill Method of Close Combat'.

On June 19, 1943, though still not an American citizen, he accepted the Colonel's offer of a commission-in-the-field with the rank of US Army Captain.

"They 'Shanghai-ed' me," the new captain chuckled.

O'Neill took part in all aspects of the brigade's grueling training, so determined not to be left out of the action he persuaded his CO to have him assigned as an Intelligence Officer and Frederick's bodyguard before they shipped out in November 1943.

Originally destined for commando missions behind German lines in Norway, the FSSF ended up fighting the Nazis first in Italy, where they played a key role in crucial battles, amazing General Eisenhower when they scaled soaring peaks at the vital Monte la Difensa in spite of stiff resistance from battle-hardened Panzergrenadiers, and later facing an equally tough enemy at Monte Cassino.

O'Neill became Uncle Sam's newest nephew at an Italian farmhouse a few hours before St Patrick's Day 1944 when he was awarded his US citizenship. He would soon personally lead heavily armed light infantry squads behind German lines at Anzio when with faces blackened night after night they silently killed sentries and stole documents and maps which Pat would vet before passing back to US Fifth Army Intelligence.

His ‘Braves,’ as they called themselves, used psychological warfare too, planting cards with their USA-Canada red arrow patch and Das dicke ende kommt nocht ('The worst is yet to come') on corpses.

With their combat strength dropping to 500 men, the FSSF's end soon came, and though they never failed in a mission, after fighting in the Liberation of France, the proud 'Devil's Brigade' was officially disbanded near the town of Menton, close to Nice, on December 5, 1944, their success making them a model for future special units like the Navy SEALs, Delta Force, and the Green Berets.

O'Neill became Provost Marshall of Monte Carlo before working with General MacArthur as Liaison Officer in Okinawa, retiring with a Bronze Star and the rank of Major, when always keen to learn, he took in lethal Okinawan Karate, and studied Aikido.

The Irishman was not so fortunate in his personal life. He had married a local schoolteacher named Mary Frances Hardigan in 1943 but their union, which produced one daughter, Barbara, did not survive the immediate postwar period.

Now a fifth dan he spent much of the 50s in Japan helping the State Department monitor communist insurgents, even traveling to Vietnam long before the US became officially embroiled there.

Pat got to see his beloved Ireland one last time in the 1970s before life did what few opponents ever could, laying the now-seventh-dan black belt flat on his back after a fall in his apartment in DC from which he never fully recovered.

Major Dermot O'Neill succumbed to pneumonia on August 11, 1985, and his cremated remains were buried in the military section of Arlington Cemetery on December 5, 41 years to the day after the FSSF was disbanded.

In spite of all his success, O'Neill never saw himself as a soldier or an early MMA fighter in the samurai spirit.

He remained, like his father, an Irish cop, happy to leave the money and fame to others.

It was simply as an old-fashioned 'intelligence man' that perhaps the greatest Irish fighter of them all hoped to be remembered.