Medieval pilgrimage “round” discovered on the island of Caher. 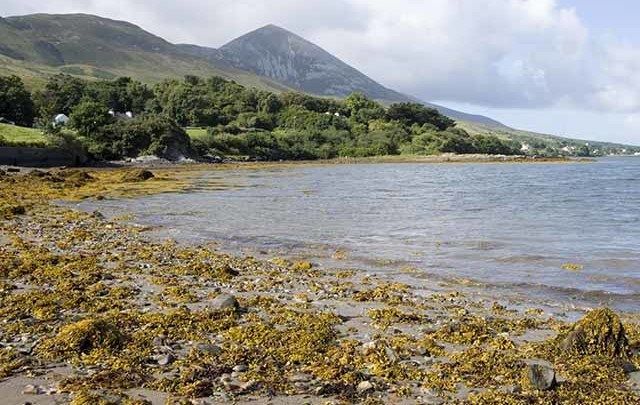 Medieval pilgrimage “round” discovered on the island of Caher, in County Mayo. Tourism Ireland

A large pilgrimage route was been discovered in 2014 on the County Mayo island of Caher. The discovery of the medieval pilgrimage “round,” or circuit, shed light on 1,000-year-old religious rituals, say archaeologists.

The rocky island, which lies between the southern tip of Clew Bay and Inishturk, was the site of a 6th and 7th century early Christian monastic settlement. St. Patrick is said to have visited the island after he had visited nearby Croagh Patrick.

The island marks the sea end of Bóthair na Naomh, the so-called saint’s road, up to the summit of Croagh Patrick and down towards the Atlantic. Sailors are said to lower their sails in esteem on passing.

Today, a pilgrimage comprising a circuit of the island takes place every year two weeks after Reek Sunday, the last Sunday in July when pilgrims climb Croagh Patrick.

Pilgrim Mick Cullen, from Co Kildare, told the Irish Examiner: “Some people go to Knock, some more go to Lourdes, some go to exotic places, but I come to Caher.”

However, fieldwork unearthed an outer arc of altars or “leachts,” marking a second, larger pilgrimage circuit on the south and west sides of the island.

The island was abandoned in 1838, archaeologist Michael Gibbons told the Irish Times, and many of these altars are barely visible now.

Gibbons said he matched his field work and aerial photography with records collected in the 1940s by Brian McLoughlin of Cleggan, Connemara, housed in the archives of the Irish Folklore Commission, which describe some of these pilgrimage stations.

Portions of the circuit would have been in use “almost into living memory," he said, and the entire round “represents a now rare example of a form of religious devotion stretching back at least a millennium on Ireland’s Atlantic coast.”

Gibbons told the Irish Examiner that Caher is linked to nearby High Island and to Inismurray in Co Sligo, all outposts of Christendom beyond which the devil was said to reside and exercise a threat.

The island, which is also known as Oileáin na Cathrach, Cathair na Naomh and Cathair Pádraig, gets its name from a stone rampart, now all but disappeared, enclosing monastic remains above one of its two natural harbors at Portatemple.

The ecclesiastical complex, which according to Gibbons, developed over a number of phases, includes a chapel numerous stone crosses, and a holy well.

One of the more peculiar pieces is a 30-inch high slab, known as Slab A, which is embossed with a large Greek cross above two dolphins.

Gibbons said the late medieval landscape and built heritage of the island is “now among the most valuable in Ireland and is has remained untouched by conservers” and “a good deal of its archaeological heritage remains unmapped.”

Fr Pat Prendergast wrote these words about the island after saying Mass there in 1961: “Caher lies in its ocean home – serene, remote and aloof – a reminder of Ireland’s first fervor in the faith, a challenge, perhaps, to our modern materialistic mode of life; ever beckoning to, and inviting, those who would come aside a little while to rest and contemplate and pray.”