“Growing up in Ireland, I scraped my black skin hoping to be white”

Niall O'Dowd talks with Annie Yellowe Palma about growing up black in Northern Ireland and her book “For the Love of a Mother: The Black Children of Ulster." 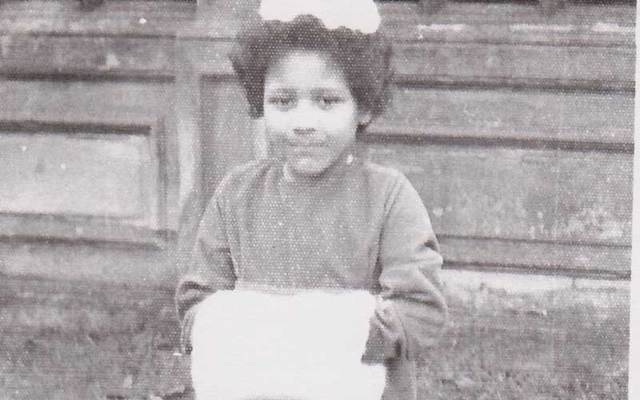 Annie Yellowe Palma grew up black in Northern Ireland at the height of The Troubles. She is the only girl and middle child of six. Her father was Nigerian and her mother Irish. Her parents separated when she was about 4 years old and she never saw her father again as the family moved back to the North. Her tragic experiences there have led her to write a searing memoir about being black in the midst of The Troubles.. The book is called  “For the Love of a Mother: The Black Children of Ulster.”

She was interviewed via e-mail by Niall O’Dowd.

Tell me your personal and family background.

I was born in Liverpool, the only girl and middle child of six.  We are not all from the same father. My eldest brother is white and the rest of us are of dual heritage. My father was Nigerian and my mother Irish. My parents separated when I was about 4 years old, and I never saw my father again. He died in 1968, and my mother died in 2008.

Tell some more about your mother.

My mother was very prominent in our lives and please believe me she has been through some very hard times before she died. My mother was small in stature and fiercely protective of us. She would have challenged and physically fought anyone however strong or tall and did so on many occasions. Sadly, life for her was such that she developed a drinking problem and smoked heavily. There were and are still very many others with the same problems and related illnesses. Shortly after we settled in N. Ireland, she entered a relationship with a male who I refer to in my book as Elvid Astan (devil satan spelt backwards).

Elvid was a heavy smoker and drinker, an ex-soldier WW2 and beat my mother mercilessly in front of us. I go into great detail about this in my book. She suffered many injuries at his hands both physical and emotional. This included having her teeth knocked through her top lip, regular broken ribs, severely bruised and bloodshot eyes and being regularly humiliated by phrases he used such as ‘nigger whore.’ We were powerless to protect her when we were little children, however, I vowed to get him out of our lives forever one way or another. Again, I go into detail in the book about how this was finally achieved. I have never been political, but I was thankful for the Mafia vigilantes who patrolled our streets as they possibly saved my mother’s life from one of Elvid’s vicious attacks.

When did you become aware you were different? Describe your early life, school, friends, etc.

I have struggled as a child and in adolescence with my identity. I grew up in a place where it appeared the only way I would escape the daily persecution of racists was to become the impossible, white. Their persistence in pointing out the color of my skin negatively, eventually wore me down and they got me looking at my color negatively too. So, when I was a child at around the age of six or seven, with the help of my friends, I tried to scrub my color off, I thought it would be that simple, like rubbing out a mistake. Well, I was quite annoyed at the time that it wouldn’t come off, and I elaborate about this in my book.

School held mixed emotions for me. Although I faced many challenges, school became my temporary sanctuary and I did quite well. School was somewhere to get fed and to get away from the violence in my own home perpetrated by my mother’s vicious live in lover. Those who would not accept my black skin would try to make me ‘more white’ in other ways. They thought they could make me ‘sound more white’.

For instance, from the age of five to eleven, I was forbidden to use my own birth name in school. My head teacher had called me into his office, and after studying me like a project, he promptly told me that instead of being called Annie Yellowe, I was to become, Ann Yellow. I break this down to the bone in my book and describe that day in detail, and how I ‘lost’ my identity, or rather, how it was ‘taken’ from me.

Even to this day, I find this incredulous. These are things people read about in history books, that happened to slaves, and it happened to me. I don’t struggle with identity anymore, I love who I am, warts and all.

Racial slurs and incidents became a part of my daily life from a very early age, and I don’t remember my life in N. Ireland without them. In the book I recall an innocent nursery rhyme where children had obviously been taught by adults to re-order the words to strike in a deeply offensive way.

catch a nigger by the toe

when he squeals let him go

How did you identify --- was it with Catholics or Protestants?

We came from a staunch Protestant background and I grew up in Portadown, Co Armagh, infamously part of what was known as ‘the murder triangle’ because of the high numbers of killings carried out by paramilitary organizations. Our life revolved around poverty and violence. I am not naturally bigoted and have always been aware that like racism, this is learned behavior. I had and still have many Catholic friends and would openly interact with them despite the potential danger I might have been exposed to.

What was life like for you during the Troubles?

My childhood memories are tainted with the trauma of the troubles. I’ve been exposed to scenes that no child should observe. I’ve witnessed the making and throwing of petrol bombs, although too young then to realize their potential to cause death. I’ve witnessed street fighting between both sides that were vicious and that many times ended with the firing of rubber bullets and sometimes death. I know too many who have been maimed or lost someone to the troubles.

We had a strange existence in that we were accepted in our community ‘one of us’ and racially abused on a daily basis by our own family, neighbours, the Mafia (In my book, I refer to all paramilitary as Mafia), the Police and the British Army.

This was mostly verbal abuse that occasionally spilled into acts of violence. I was once knocked unconscious by a racist thug in a nightclub. My brothers literally had to fight to earn respect and we learned to ‘hold our own’. The Mafia and our friends could be fiercely protective and would come to our defence when others tried to insult or hurt us.

What made you decide to leave?

I realized I was a victim of my life circumstances. I was born into violence and poverty. That life was forced on me as a helpless child. I never wanted to live that way and I had little to look forward to. Those circumstances and the daily grind of fighting racism lead me to experience some very low times. I developed ‘hidden depression’ that almost ended my life in a suicide attempt. It shocked me to the very core to realize that I could actually die! I chose life and moved to London when the opportunity arose!

Subsequent life away from North?

When I moved to London in 1986, I began writing down my story, initially as a form of self-therapy. I had thought about writing my story from the age of seven, but didn’t have the words or maturity to do so. Writing helped me to heal and move on emotionally. These opportunities culminated in me producing my book, For the Love of a Mother (The Black Children of Ulster).

Since leaving N. Ireland I have progressed beyond my dreams. I re-entered education and I am a Qualified Social Worker with a Diploma in Social Work, a BSc Honours Degree in Applied Social Science and an Advanced Award in Social Work. I have a collection of poetry available via e-book on Amazon. I have family and friends across London and I have travelled widely to places I never thought possible, Africa, India, Japan and the Caribbean to name a few.

Looking back what do you remember most?

It was confusing that although some were taught to hate the color of my skin, they had and still have, great affection for me. Suffocation and violation is what I remember most. Feeling that I couldn’t breathe properly. That I was in a cage where I had to normalize my violent and pathetic world in order to survive. I remember getting away from there and how elated I felt coming to London and a healthier normality. Not that London is without racism, just that I do not have to face it openly on a daily basis and I can breathe.

'For the Love of a Mother: The Black Children of Ulster' book cover.

For the Love of a Mother: The Black Children of Ulster by Annie Yellowe Palma