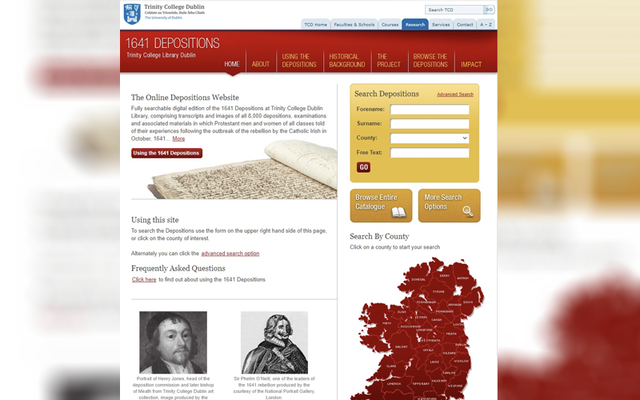 Housed in Trinity College Dublin, the online resource from the 1641 Rebellion provides an extraordinary insight into life across the 32 counties of Ireland.

Voices of the Past: Celebrating our Legacy

Voices of the past, stories for the future: a Research Showcase from the 1641 Depositions Project On the 10th anniversary of its launch and almost 380 years since the outbreak of the 1641 Rebellion, the 1641 Depositions Project celebrates its legacy and impact in a virtual research showcase this October 22nd, 2020. A flagship transdisciplinary digital humanities endeavour, the project has transformed our understanding of how the controversial events of the mid-seventeenth century are recorded and remembered. Join us in recognizing and understanding how the 1641 Depositions project benefited multiple partners and stakeholders within and beyond academia. We will hear from colleagues in computer science, education, policy, industry and the project funders, as well as special guests who launched the project 10 years ago. This showcase will also mark the forthcoming launch of the final 7 volumes of the 1641 depositions in November 2020 by the Irish Manuscripts Commission, and will be hosted by Prof Eve Patten, Director of the Trinity Long Room Hub and chaired by Prof Jane Ohlmeyer. Speakers Dr Mary McAleese, former President of Ireland and Chancellor of Trinity College Dublin, launched the results of the project in 2010 during her presidency, and will reflect on history and identity, and on the importance of bowing to the past without being bound by it. Professor Andrew Thompson, UKRI and University of Oxford, former Executive Chair of the Arts and Humanities Research Council (AHRC, 2018-2020), will reflect on the Project's impact from the funding perspective. Marie Wallace, Data Strategist at IBM, will provide her perspective of the relevance of the 1641 Depositions Project for IBM and her own experience with working with academia. Dr Eamon Darcy, an early modern scholar who worked on the 1641 Depositions Project, will reflect on the development of the educational resources in partnership with Bridge 21. Professor Vinny Wade, CEO and Director of the ADAPT Research Centre, will bring his perspective as a Project partner in computer science. Professor John Walter, from the University of Essex, will reflect on the Project's contributions to scholarly and archival research.

Did my grandfather join the Volunteers and fight during the War of Independence? From where in Ireland did my family escape the Great Famine and emigrate to the United States? For what crime was my great uncle transported to Australia in the mid-nineteenth century? Genealogy in Ireland is big business, with huge interest both domestically and from abroad, especially Britain, the United States, and Australia.

The publication online of the 1911 census, alongside greater public access to a wide range of official records has undoubtedly transformed the research environment of late but the task of tracking family members becomes increasingly difficult the further back one goes from the nineteenth century. The destruction of the Public Records Office in Dublin at the outset of the Irish Civil War in June 1922 created a massive hole in the early modern and Medieval archives and historians have long bemoaned the absence of primary source material compared to our European neighbors.

Exciting new projects have begun to expose the hollow nature of these complaints, with vast untapped sources made available to the public in recent years. The 1641 Depositions, which first appeared online back in 2010, and in 12 volumes published by the Irish  Manuscripts Commission, are a case in point.

The 1641 Rebellion marks a significant milestone in Irish history. It triggered a war that lasted for over 12 years, destroyed much of the country’s infrastructure, and resulted in a demographic collapse. The subsequent Cromwellian land settlement oversaw one of the largest land transfers anywhere in Western Europe, with Catholic proprietors, who made up over 60% of the pre-1641 total, largely replaced by Protestants. These seismic events laid the foundation for the Protestant Ascendency, which dominated Irish political, economic and social life for two centuries until the great political and land reforms of the 19th century.

The 1641 Depositions constitute one of the most important and fascinating sources from this traumatic period. They consist of over 8,000 witness statements provided to government-appointed commissioners by Protestant refugees fleeing from Catholic insurgents during the early months of the rebellion and again after the conclusion of the war in the 1650s.

The originals, housed in Trinity College Dublin, provide the primary evidence of the violent nature of the rebellion and contain harrowing stories of bloodshed and loss. Subsequently used to justify harsh measures against all Irish Catholics, many commentators questioned the veracity of the statements and dismissed the entire corpus as mere propaganda. Arguments, however, over the extent of the killings obscures the extraordinary richness of the 1641 Depositions on a variety of different levels. 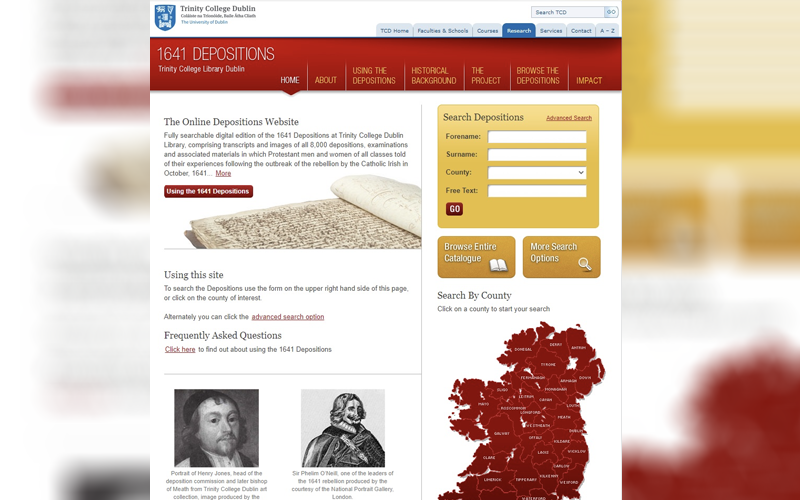 A still of the 1641 Project from Trinity College Dublin.

The statements provide a unique window into everyday life in 17th-century Ireland, where information on the lower classes can be difficult if not impossible to access. Accounts exist from a broad cross-section of society, from the landed elite to tradesmen and laborers, while almost half of the deponents are women, another group largely absent from early modern historical record. The initial purpose of the depositions was to provide an inventory of loss for those forced from their homes by the uprising, in the hope of obtaining some assistance from the colonial authorities. These 17th-century insurance claims outlined – often in exhausting detail – the full extent of possessions for every individual, from household goods, trade or farm equipment, livestock, and at times, cash. Like all claims, they must be treated with caution but nonetheless provide an extraordinary insight into life in colonial Ireland.

The depositions were taken across all 32 counties of Ireland, although coverage for certain parts of the country, such as West Ulster is patchy, as few refugees from this area reached Dublin. The county with by far the largest number of deponents (over 1,500 in total) is Cork, which had its own commission.

Each individual deposition records the name and a place residence of the deponent, so they can be linked to a specific townland for identification purposes. Thereafter, the statement often provides information on family members and neighbors, facilitating the construction of local social networks. Moreover, in many cases the deponent provides details of the names of those who attacked them, with lists sometimes running to dozens of individuals.

All this information is now readily available to genealogists, who can use the search engine on the 1641 website or the indexes of the published volumes to look for specific individuals or places. The indexes also guide the researcher through the minefield of variant spellings, particularly for local place names.

Compared to the dearth of information available for much of the 17th century until recently, the genealogist can now begin to explore the early modern period with greater confidence. Using the 1641 Depositions, alongside other important new sources available online such as the Down Survey maps and the forthcoming Books of Survey and Distribution, it might even prove possible to extend those family trees back centuries. Happy hunting!

* Micheál Ó’Siochrú is a Professor in Modern History at Trinity College Dublin. He is Principal Investigator on the 1641 Depositions Project.