Over 2.5 million images of Irish births, deaths and marriage records from the General Register Office, were released online for the first time. 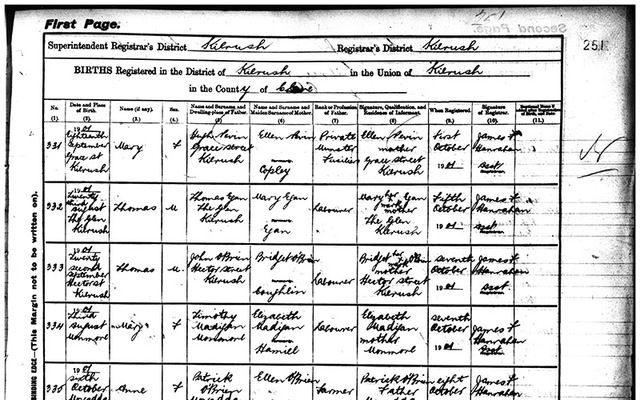 In September 2015, over 2.5 million images of Irish births, deaths and marriage records from the General Register Office (GRO), were released online for the first time.

The images, available on www.irishgenealogy.ie, date back as far as 1864. Among the records are the birth, marriage, and death register for Tom Crean, the Antarctic explorer. Crean’s grandson Brendan O’Brien joined the Irish Government Ministers Heather Humphreys and Leo Varadkar at the release launch event at the National Library. The online database also includes death register entries for the Leaders of the 1916 Rising, including James Connolly, Thomas Clarke, Padraig H Pearse, and Eamonn Ceannt.

Irishgenealogy.ie is a by the Department of Arts, Heritage, Regional, Rural, and Gaeltacht Affairs. Until now these historic records were only available by visiting the Public-office of the GRO or by placing an order online but now they are open to the public at a click of a mouse.

Minister for Social Protection, Leo Varadkar, said of the collection “It is a triumph of exploration because the records allow us all to explore our own past, and discover new things about our ancestors. What used to require weeks and months of research in dusty archives can now be done online in a matter of minutes.

"Given the theme of exploration, it's fitting that we are joined at this launch by the grandson and great-grandson of one of the greatest polar explorers of all time: Tom Crean. For the first time, the original register entries of Tom Crean's birth, marriage and death are now available to view.”

Speaking at the launch Humphreys, Minister for Arts, Heritage, Regional, Rural and Gaeltacht Affairs, said “This is the first time that this huge volume of records is being made available online and it is a very important development in family history research for Irish people and Irish descendants both at home and abroad. Anyone wishing to research their family history will have a veritable treasure trove of records available at the click of a button and I've no doubt that these records will help unlock many mysteries that people have been trying to solve for years.

She continued “By providing as much information as possible free online, the Irish Government is leading the way internationally and encouraging the Diaspora to come to Ireland to explore their roots.”

From the records, you can source the early birth registers, which contain the date and place of birth, name, and sex of the child, name, surname and dwelling place of the father, name, surname, and maiden surname of mother, rank, or profession of father, signature, qualification, and residence of the informant, when registered and the signature of the registrar.

Delving into the early marriage registers you can find the date when the couple married, the name and surname of the spouses, their age, condition (meaning marital status) rank or profession and residence at the time of marriage, their fathers’ names, surnames, and ranks or professions, where the marriage took place and by whom the marriage was witnessed and solemnized.

The early death registers contain the date and place of death, the name and surname of the deceased, sex, condition (meaning marital status), their age at their last birthday, rank, profession or occupation of the deceased, certified cause of death, and duration of illness, signature, qualification, and residence of informant, when registered and the signature of the registrar.

The website also contains over the million church records from Dublin, Cork, and Kerry. Most of those records pre-date civil registration.

In addition, the website contains a web portal that allows people to do one search which will scan a range of records. The range of records includes the 1901 and 1911 Census Records, Tithe Applotment Records, Military Archives and Ellis Island records, and Castle Garden Records, in New York.