Pew Research Center show the progression of Irish immigration to the US through an interactive map. 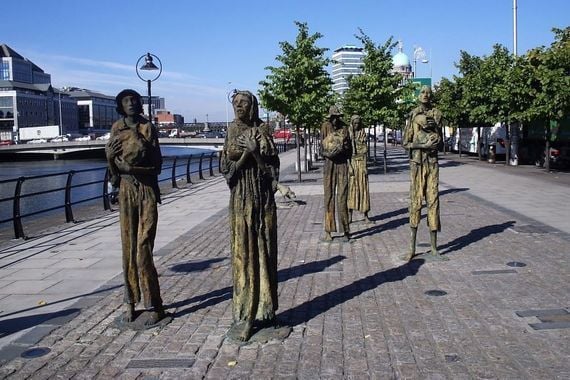 How did the Irish come to America from the Great Hunger onward? Rolling News

The Irish have a long history in the US but how did the Irish come to America?

Irish people throughout the decades have been among the most eager to take their shot at the “American dream” with waves of Irish immigrants relocating to the Land of the Free for a variety of reasons: to escape poverty and hunger, hoping to find better jobs and a brighter, more stable future for their family or for the sense of adventure and to try something new.

So great has been the influx of Irish people to the US, especially since the time of the Great Hunger in the 1840s, that 40 million Americans currently claim Irish heritage, almost nine times the population of Ireland itself.

Although many Irish people made their way to the States before the Great Hunger, the numbers making the dangerous trip on coffin ships across the Atlantic increased dramatically from the 1840s onward, reaching its peak in 1890 when there were 1.9 million Irish-born people living in America (see below).

When the total number of Irish-Americans not just Irish-born is added to this, the figure reaches a remarkable 4.3 million, or 13 percent of the population of America in 1890. (To put this into perspective, in 2014 there were 125,022 Irish-born living in America. That’s only six percent or just over a twentieth of the 1890 figure.)

Although the majority of these Irish immigrants settled in the main urban areas on the east coast such as New York and Boston, as the west coast opened up, some chose to make the most of the opportunities there.

As can be seen from the graph above, the number of Irish-born people living in America remained high but never reached the same levels, dropping below the million mark again by 1930 and it has continued to fall since then.

As the number of Irish immigrants declined, the immigration rate from other countries increased, and eventually, states that had been predominantly Irish in the 19th century became less and less so.

In 2015. Pew Research Center created an interactive map that showcases the change in the nationality of the largest immigrant group in each state from 1850 to the present day, tracking the levels of immigration from Ireland to the US.

The lack of restrictions placed on the Irish in the post-famine years meant nothing stopped hundreds of thousands from forming the majority immigrant group in many states, especially on the east coast.

The transition to the west coast can then be clearly seen, although the Irish presence remained strong in the east until 1910, by when there was only one state where the Irish were the predominant immigrant group. This is possibly due to the cap placed on the total number of immigrants to America and the establishment of quotas based on nationality.

By 1990 the situation was dramatically changed as fewer than 10 percent of all immigrants came from Europe.

Of course, Irish people's emigration destination of choice changed after WWII. For the most part, they moved to Britain rather than America.

The Irish are no longer the predominant immigrant group in any US state. The 2013 figures show that the vast majority come from Mexico. Yet with millions still claiming Irish ethnicity, and thousands still moving to the US, the Irish in America aren’t down and out yet.