The Whiteboys were a secret Irish agrarian organization in 18th-century Ireland. 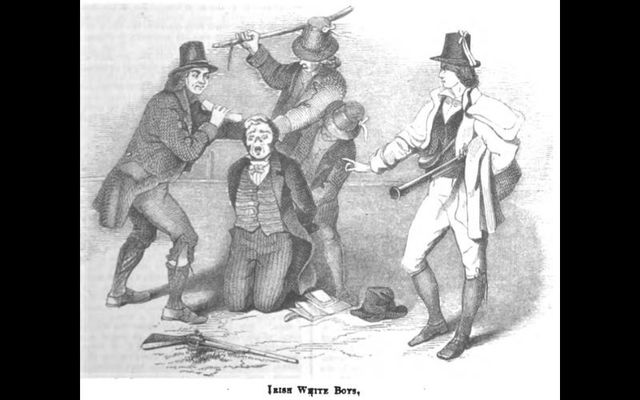 The group earned the moniker ‘Whiteboys’ due to their custom of wearing white smocks during their nightly raids. Some Irish immigrants who settled in the rural United States carried their rebellious spirit with them across the Atlantic, as a result of which ‘Whiteboy’ became a generic term for ‘rebel’ outside the cities.

Back in Ireland, the Whiteboys were usually referred to at the time as Levellers by the authorities, and by themselves as "Queen Sive Oultagh's children", "fairies", “followers of Johanna Meskill" or "Sheila Meskill", all symbolic figures supposed to lead the movement.

The Whiteboys sought to address rack-rents, tithe collection, excessive priests' dues, evictions, and other oppressive acts by landowners. Landlords and tithe collectors were their primary targets. The ‘boys ran a slick operation, priding themselves on extensive forward planning and regular assemblies. Absolute loyalty was mandatory, and the Whiteboys were the first organization to invest the custom of swearing oaths with tremendous practical and symbolic importance.

Whiteboy activism saw its first peak in County Limerick in 1761, quickly spreading to Tipperary, Cork, and Waterford. Initially, activities focused only on specific grievances, and action was limited to leveling ditches that closed off common grazing land, and digging up ley lands and orchards.

As their numbers increased, so did the pace and severity of Whiteboy activity. Clandestine proclamations were posted under names like "Captain Moonlight", and the group sent threatening letters to debt collectors, landlords, and occupants of land gained from eviction, demanding that they give up their farms.

In 1762, the Whiteboys marched to "disaffected and treasonable tunes" about the countryside, entering towns at night to fire guns and taunt garrisoned troops. The boys posted notices announcing activities, and demanding that the townspeople illuminate their houses and provide their horses, ready saddled, for their use. More militant activities often followed such processions, such as attacks on unlit houses, and the forced release of prisoners from jail.

On 2 April 1761, a force of 50 militia men and 40 soldiers under the Marquis of Drogheda set out for Tallow and arrested eleven Levellers. Other raids took 17 Whiteboys in County Limerick and by late April, at least 150 Whiteboys had been arrested.

Clogheen in County Tipperary bore the initial brunt of this assault as the local parish priest, Fr. Nicholas Sheehy, had earlier spoken out against tithes and collected funds for the defense of parishioners charged with rioting. An unknown number of "insurgents" were reported killed in the "pacification exercise" and Fr. Sheehy was unsuccessfully indicted for sedition several times before eventually being found guilty of a fabricated

charge of murder, and hanged, drawn and quartered in Clonmel in March 1766.

In the cities, suspected Whiteboy sympathizers were arrested, and in Cork, loyal citizens formed an association of about 2,000 strong which offered rewards for the capture of the chief Whiteboys and often accompanied the military on their rampages.

Though Whiteboy activism in Ireland was suppressed more effectively towards the end of the decade, their earlier activity served as a model for rebellion on an organizational scale never before seen in agrarian Ireland. Their use of the oath as a means of binding members, and their spirited objection to low wages and the conditions of the rural poor, saw their influence spread across the Atlantic, and their name adopted by rebellious groups across the US.

*This article was originally published in November 2015 as part of a previous partnership with FindMyPast. It was last updated in October 2022.