The explosion of individuals submitting DNA samples to genealogy search companies has opened a new and exciting door. 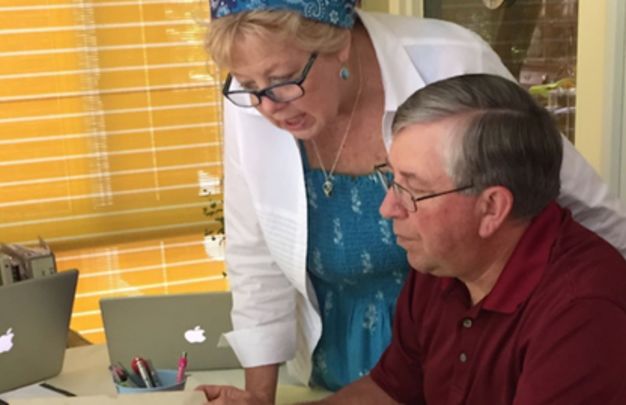 Kate and Mike reviewing family records in the Kennedy family bible passed down through four generations. Kate and Mike Lancor

The explosion of individuals submitting DNA samples to genealogy search companies has opened a new and exciting door that can lead to a fantastic ancestral journey.

Have you used tried and true research techniques and hit a “brick wall” for one or more of your ancestors?  Have you built a family tree and submitted a DNA sample to Ancestry.com, 23 and Me, and/or My Heritage?  If you can answer yes to both questions, then DNA matches may help you bust through your “brick walls”!

Genealogists have long had to master the ability to carry out searches by following clues and using traditional techniques to “chase” ancestors. In 2007, 23 and Me introduced genetic testing for ancestral purposes to be followed in 2012 by Ancestry.com.  Over 28 million DNA samples have been submitted to genealogy search companies. These samples have created an amazing search opportunity for both professional and amateur genealogists. One can now combine searching one’s DNA matches with the tried and true methods of genealogy research to break through “brick walls”. 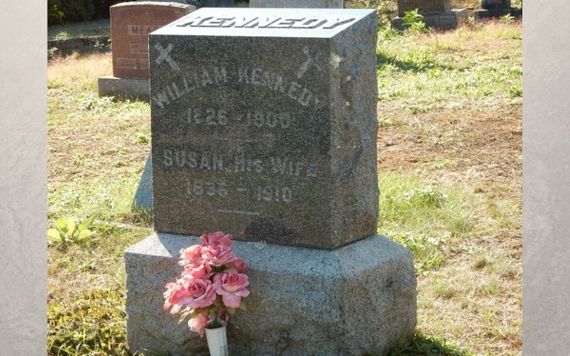 Ancestry.com refers to one’s shared DNA matches as “biological relatives”.  We will provide highlights as to how we studied the family trees of our DNA cousin matches to solve our ancestral mysteries. The same technique can be used with other genealogy websites that allow individuals to submit a DNA sample and connect that sample to their family tree.  That’s the key, being able to explore the family trees of other individuals who are your DNA matches and share with you at least one common ancestor! 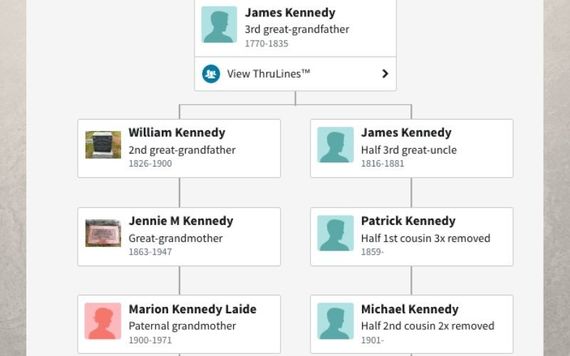 Tried and true genealogy searching allowed us to discover that Nora Harney and her two brothers John and James all immigrated to Albany, NY.  Nora’s death certificate states that her parents were James Harney and Honora Prendergast.  Her brother James’ death certificate names his parents as John Harney and Nora Prendergast.  One of the informants was wrong, but then again that is not uncommon.  Family lore says the Harneys were from Carrick-on-Suir.  After a thorough search of Irish genealogy websites, no baptism records could be found for Nora and her brothers. 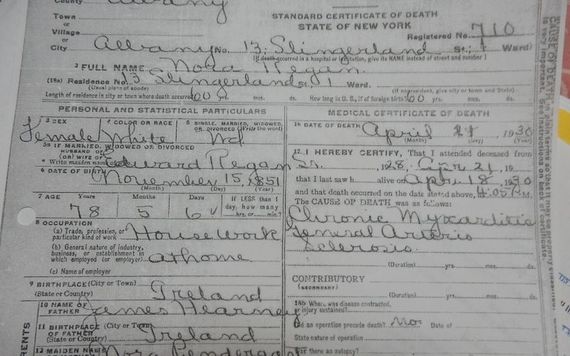 We found a marriage record for a John Harney and Honora Prendergast in 1840 in RC Parish Newcastle, Co. Waterford.  We also identified a small townland in Co. Waterford bordering Newcastle called Glenanore where John Harney Sr. and Jr., James Harney Sr. and Jr., and William Harney lived in 1850.  Most exciting was the fact that Glenanore is in Union Carrick-on-Suir!  We hit a “brick wall” when we could not find a record proving that Glenanore was Nora’s home townland. 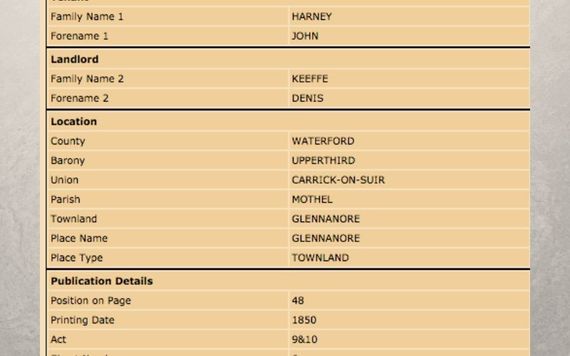 Kate’s incredible DNA match on Ancestry.com was a fourth cousin male with the surname Harney. We immediately used traditional search methods to find the common ancestor shared by Kate and her Harney cousin.  The ancestor of Kate’s DNA match who emigrated to the U.S. was Patrick Harney who was born circa 1859 in Ireland and died in 1917 in Chicago.  His death certificate stated the names of his parents as William Harney and Catherine Casey. 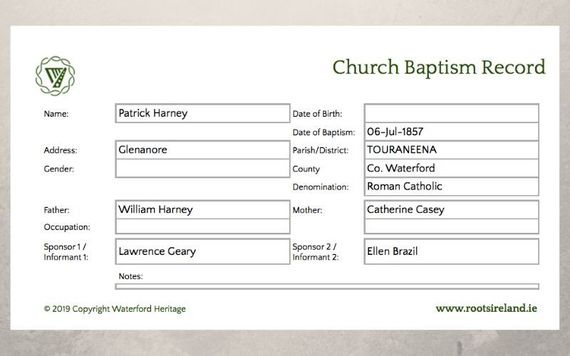 Amazingly, we found Patrick Harney’s baptism record!  He was baptized in Glenanore, Co. Waterford in 1857 to parents William Harney and Catherine Casey. Kate’s Harney “brick wall” had been solved!  In May 2019, we spent a day in Glenanore, Co. Waterford visiting some of Kate’s long lost cousins who reside there today.  We also walked in the “footsteps” of Kate’s Harney ancestors by visiting the small hamlet where Kate’s great grandmother Norah Harney was born. 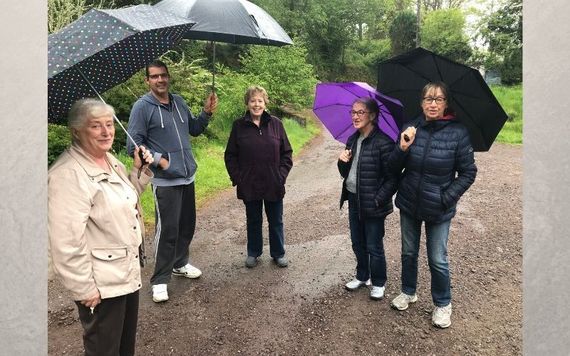 Kate’s long lost cousins Mary, Bobby, Noreen and Carmel took us on a tour of the old Village of Glenanore. Notice the umbrellas!

Mike’s Aunt Peg has the Kennedy family bible that has been passed down to her through four generations.  Bible records state that Mike’s 2nd great grandfather William Kennedy was born in Dunganstown, Co. Wexford, Ireland on 15 March 1826, that he arrived in Boston in 1848, and that his brother Patrick stayed in Boston.  Family lore passed down over three generations says that William Kennedy was the brother of John F. Kennedy’s direct ancestor Patrick Kennedy who immigrated to Boston from Dunganstown! 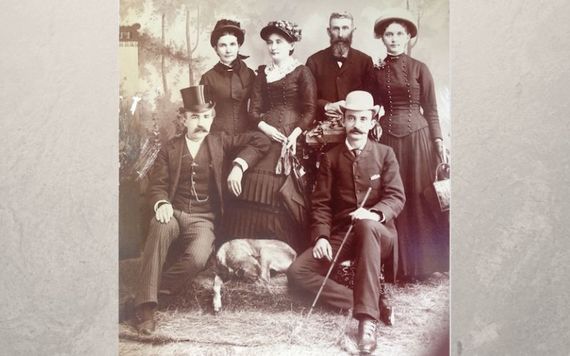 William Kennedy (back row), his wife Susan and four of their children in a late 1800s photo taken in Lewis County, New York.

We were able to use good old-fashioned genealogy search techniques to identify as many records as possible for the Kennedys who stayed in Dunganstown.  We have visited the Kennedy Homestead on three different occasions where a poster shows Patrick Kennedy’s direct line back to his parents James Kennedy and Maria (Mary) unknown.  As is often the case in Ireland, there are no baptism or marriage records available for Dunganstown during the early 1800s.  However, we were able to get a copy of the death certificate for William Kennedy and his parents were James Kennedy and Mary.  A match to the record posted for Patrick Kennedy in the Kennedy Homestead. 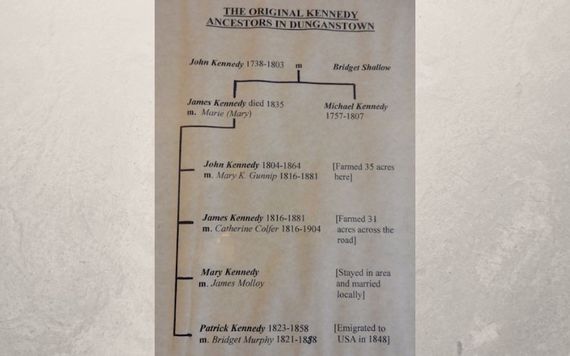 Poster on display at the Kennedy Homestead in Dunganstown. Patrick Kennedy (1823 – 1858) was JFK’s great grandfather and William Kennedy’s brother.

Lacking any record other than the family bible that linked William Kennedy to Dunganstown, we went to work trying to find a DNA match to Mike whose ancestral line also went back to Dunganstown.  We hit “pay dirt” when we discovered a 4th cousin match of Mike’s whose grandfather Michael Kennedy emigrated to the U.S. in the early 1900s.  Using traditional genealogy search techniques, we were able to find Michael Kennedy’s death certificate naming his parents Patrick Kennedy and Johanna. 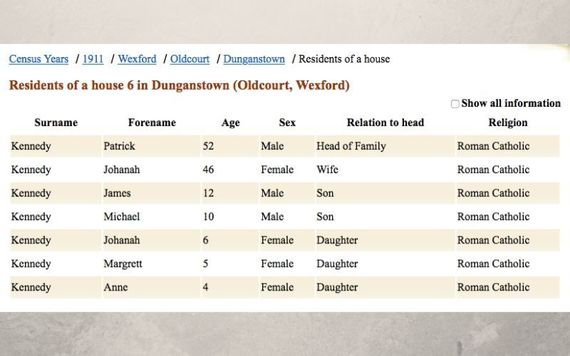 We were then able to find census records for Michael Kennedy living with his parents Patrick Kennedy and Johanna Breen in Dunganstown in 1901 and 1911. We even found his baptism and confirmation records!  Mike’s DNA match had led us directly back to Dunganstown. Another “brick wall” had been solved by Genealogy Sleuthing! 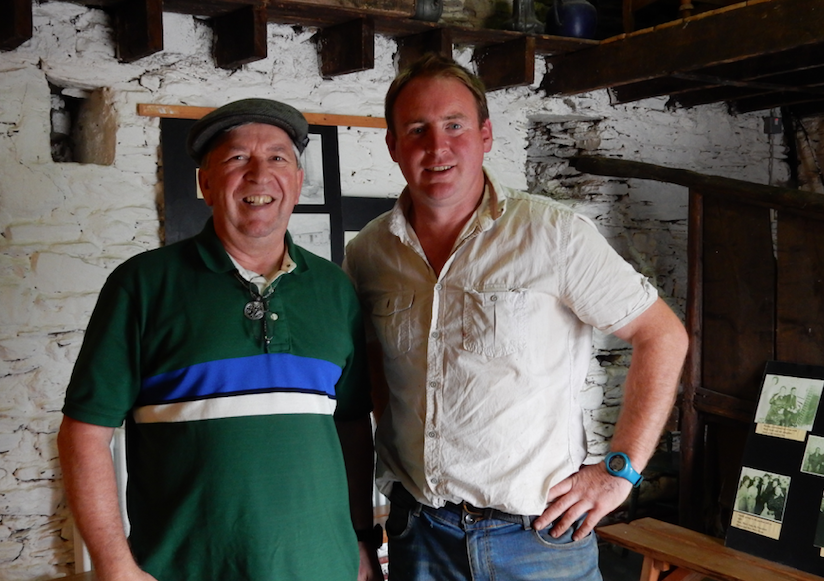 If you “hit a brick wall” in your search, then Old Friends Genealogy specializes in “chasing” Irish American ancestors back in time.  We work closely with clients by exchanging information, asking questions, and confirming records found in an effort to identify where each client’s immigrant Irish ancestors lived on the most beautiful Emerald Isle.  We can also use Genealogy Sleuthing to see if one’s DNA matches can help determine their ancestors’ home townlands.

* Kate and Mike Lancor live in Moultonborough, NH, and have traveled to Ireland numerous times. They can be reached on their website www.oldfriendsgenealogy.com or by emailing oldfriendsgenealogy@gmail.com. You can also visit their Old Friends Genealogy Facebook page.