All the basics and some fun facts about County Wicklow. 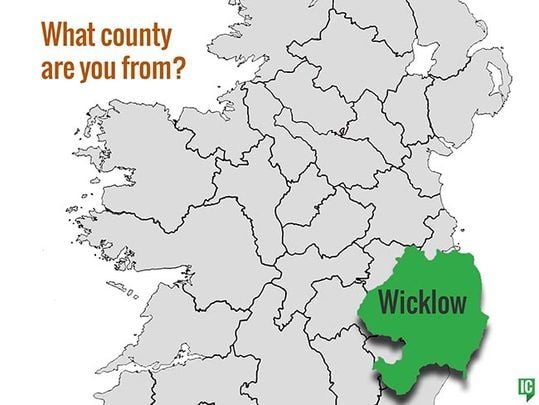 Irish Name: Cill Mhantáin - "Church of the toothless one"

Nickname: The Garden of Ireland, The Goat Suckers

Wicklow, meaning "church of the toothless one" is the county seat of County Wicklow in Ireland. Located south of the capital Dublin on the east coast of Ireland.

Local history contends that the town of Wicklow was founded by the Vikings, probably around 795 AD. However, given the area's natural harbor and fertile hinterland, it is likely that a small settlement existed before the Vikings landed.

The name Wicklow comes from the Old Norse Víkingalág and its anglicized form Wykynlo, which may translate as "Viking's meadow" or "Viking's lake."

The surrounding County of Wicklow is rich in bronze age monuments. The oldest surviving settlement in the town is the Franciscan Abbey, located at the west end of Main Street, within the gardens of the local Roman Catholic parish grounds.

Other notable buildings include the Town Hall and the Gaol [jail], built in 1702 and recently renovated as a heritage center and tourist attraction. The East Breakwater, arguably the most important building in the town, was built in the early 1880s by Wicklow Harbour Commissioners. The architect was William George Strype and the builder was John Jackson of Westminster.

The North Groyne was completed by about 1909 – John Pansing was the designer and Louis Nott of Bristol the builder. The gaol was a place of execution up to the end of the 19th century and it was here that Billy Byrne, a leader of the 1798 rebellion, met his end in 1799. He is commemorated by a statue in the town square. The gaol closed in 1924 and is today a tourist attraction with living displays and exhibits.

Avondale House & Forest Park includes the Charles Stewart Parnell Museum. Over 500 acres of mature woodland with trees from all over the world including the tallest collection of trees in Ireland.

Scene of a famous shoot out during the 1798 Rebellion. It was here that the famed rebel Michael Dwyer fought off the surrounding British troops and made good his escape over the snow covered mountains.

Glendalough is home to one of the most important monastic sites in Ireland. This early Christian monastic settlement was founded by St. Kevin in the 6th century and from this developed the “Monastic City.”

Built on the banks of the Avoca River from where it used to draw its power, you’ll find a large Avoca Store and Café and a working hand-weaving mill. The oldest surviving working mill in Ireland today, dating from 1723.