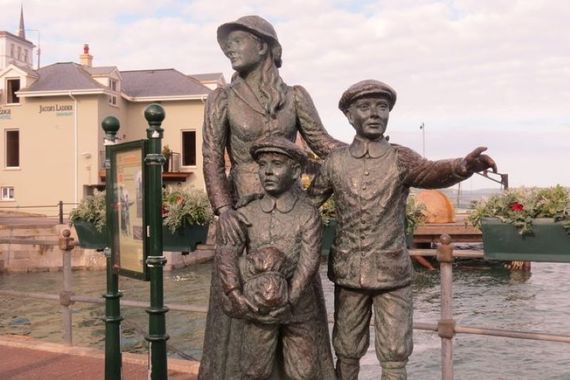 But a new and important chapter was added to her story in April 2016, when her living descendants in the US met with her surviving relatives from Ireland.

Genealogist Megan Smolenyak, who also discovered in 2006 that history had pinned the Ellis Island legacy on the wrong Annie Moore, completed her years-long search for the family Moore left behind in Ireland.

And a few years previous, relatives of Moore’s from each side of the Atlantic finally met.

Paul Linehan, a 47-year-old tenor from Narraghmore, Co Kildare, and Michael Shulman, a financial analyst from Silver Springs, Maryland, had lunch with Smolenyak at the appropriately named Annie Moore’s Pub in Manhattan. They then attended the Irish America Hall of Fame luncheon, where Linehan sang a poignant rendition of “Isle of Hope, Isle of Tears,” the ballad about Annie Moore’s journey.

Moore set sail from Cobh (then Queenstown) Co Cork on board the Nevada with her two younger brothers, Anthony and Phillip. Today, there is a statue in Cobh commemorating their departure.

The siblings arrived in New York Harbor on January 1, 1892, the day that Ellis Island opened its doors, and Annie was the very first of close to 12 million immigrants who would be processed through Ellis Island between that day and its closure in 1954.

Annie was awarded an American $10 piece at the time and was written about in newspapers, but in the decades that followed her story was largely forgotten. By the time interest in the first Ellis Island immigrant was renewed, it was thought that Annie Moore died in Texas in 1923 after being hit by a streetcar.

The only problem was that records stated that this Annie had been born in Illinois, but this was largely overlooked and the Texan Annie’s descendants attended Ellis Island-related for the centenary in her honor.

Then, in 2006, Smolenyak tracked down the real Annie, who settled in New York City and led the kind of small, difficult life common to so many immigrants at the time. She joined her parents in a tenement in the Lower Eastside, likely never traveling farther than a few blocks beyond the neighborhood after her journey across the Atlantic. She married a bakery clerk, with whom she had eleven children, five of whom died before the age of three. And then Annie herself died in 1924 at the age of 50 and was buried in an unmarked grave at Calvary Cemetery in Queens.

Smolenyak was also able to track down the real Annie’s descendants, and in 2008 they were part of an official commemoration ceremony at Calvary Cemetery, at which Annie’s grave was marked with a proper headstone.

Smolenyak then set herself the additional – much more complicated – goal of finding the living descendants of the Moore family who remained in Ireland. She chronicled her process in an issue of IrishCentral’s sister publication Irish America magazine, and it’s a fascinating read.

Speaking with Sam Roberts of the New York Times, Linehan and Shulman expressed their mutual respect for Annie and amazement at meeting each other.

“Two weeks ago no one was aware of this connection, Annie Moore was just a statue to us,” Linehan said.

“Stories of immigration in Ireland are 10 to a penny. But there was a strong push from my family to build a bridge between the Irish and American cousins.”

As fate would have it, Linehan had visited Ellis Island on a trip to New York in 2000, never thinking that he was related to Annie Moore.

Shulman, whose full name is Michael James Patrick Shulman, knew of family lore that they were descended from Annie and tried to track down relatives during a trip to Ireland in 1978, bringing his mother’s Bible with him, but he was overwhelmed by the vast number of Irish with the surname Moore.

A larger family reunion is in the works.

This map takes the guesswork out of your Irish genealogy research