From village dances to dead donkeys, a Sligo man shares his stories of growing up in rural Ireland. 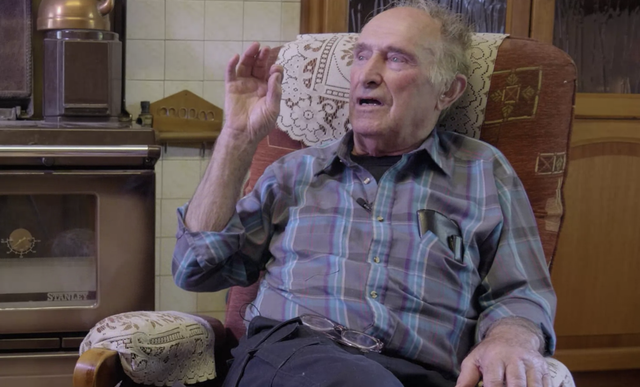 StoryTracks scratches behind the surface and shares the authentic stories of Ireland, in this case, the incredible storytelling of Andy Hegarty.

In this wonderfully funny and moving interview, Andy Hegarty shares his stories of growing up in Sligo, emigrating to England and Chicago, and eventually settling back at home in Ireland.

The interview was recorded by StoryTracks a community that aims to tell "real" authentic stories of destinations and local communities. Founded in 2017 by Fergal Nealon, StoryTracks' mission is to "capture and preserve local stories for future generations. To give back to communities by empowering them to tell their stories and put their places on the map!"

This video was made by StoryTracks with the assistance of folklorist Joe McGowan and original music by Daithí Gormley.

Andy Hegarty's interview is the epitome of Irish storytelling. From laughter to tears, Hegarty's wonderful chat rambles from tales of local dances, American wakes, fairies, and much more.

Hegarty was born into a family of eight children who lived on the side of a hill in a small townland of Aclare, County Sligo. Nealon told IrishCentral, Hegarty "tells us of his early days in rural Ireland, traditions and customs,  the fun and the sadness."

"Emigrating to England at 14 and later Chicago, Andy eventually settled back in his native Sligo."

He added that Hegarty "was interviewed by my late father, Ted Nealon, in an award-winning Seven Days program on emigration from Aclare in 1969.