Are ancient fairies behind the visual trickery of these magic Irish roads?

Are leprechauns and ancient myths behind these roads where cars roll uphill? Or is it just plain old boring science? 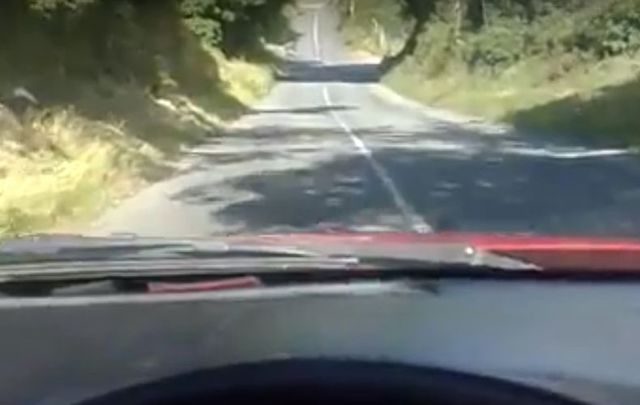 The magic road, cursed by fairies, on the way to Dundalk, in County Louth. Facebook

Are leprechauns and ancient myths behind these roads where cars roll uphill?

Ireland’s far-reaching ancient history has lent its countryside to being riddled with all kinds of magic, from fairy rings to sacred trees, there’s sorcery in the Irish air but the magic hills or roads must be the most visual of all the trickery found in the Irish countryside. This brilliant video illustrates just how crazy the “magic hills” really are.

So! As you can tell, magic hills fail to recognize the natural rules of gravity. If you turn your car engine off while you’re on the hill and put the car in neutral you will roll UP the hill. Magic!

The magic hill featured in this video is located in Jenkinstown, on the Omeath Road, in County Louth.

Over the years scientists have visited sites such as this with monitors, meters, and magnets but to no avail. It is obviously magic! It’s said that the magic comes from unseen sprites, like leprechauns, who are up to no good.

The area where this magic road is located, the Cooley Mountains, has long been associated with ancient Irish myths and legends. Much of the ancient tale of The Tain takes place in these mountains and there are several Neolithic tombs in the area.

If you really want to ruin the magic these legendary places, here’s what’s really happening... Be warned though, the real explanation is not that much fun.

So, a magic hill occurs where a slight downhill slope appears to be an uphill slope. This is due to the layout of the surrounding land, creating an optical illusion that water flows up hill or, in this case a car, will roll uphill.

The Dundalk magic road isn’t the only one in Ireland either, those leprechauns get about. Here’s a run down some other famously magic spots around Ireland.

This magic road in Waterford is probably the most famous in the country. It’s located at Mahon Falls.

Some of these roads are, of course, tough to find but this one’s marked plainly with a “Magic Road” sign! The area was also home to a fairy tree until 2011, when hooligans, who no doubt are having fierce bad luck, cut it down.

Of course, being located in “Yeats’ Country”, at Ben Bulben, in County Sligo, there is an aura of magic about this area anyway so there’s little surprise that there are TWO magic hills close by.

You have to admit these videos are conclusive proof of some sort of magic!

Do you believe ancient Irish fairy’s trickery is behind these magic roads in Ireland? Let us know below.