Who is Amaryllis Fox? The former CIA spy married to a Kennedy

Amaryllis Fox has led a fascinating and influential life all before the age of 40. Learn more about the former CIA operative here. 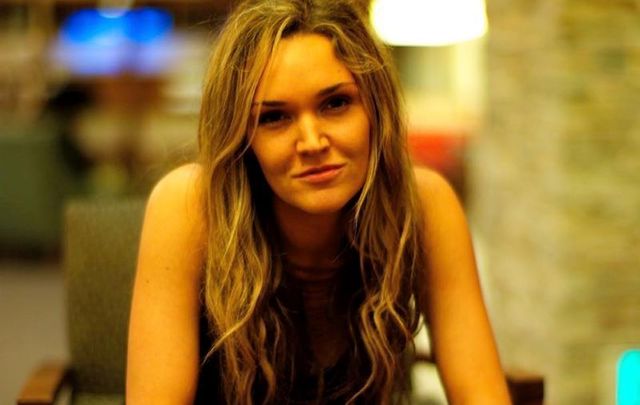 Here are the fast facts you need to know about Amaryllis Fox.

Amaryllis Fox, a former coder and CIA Clandestine Service Officer,  is a writer, television host, peace activist, and entrepreneur. She was born in September 1980 in New York.

Some weeks are so filled to overflowing that it’s hard to conjure words. This was one of those. . Marriage is a mysterious thing — intimate yet communal, earthly yet sacred. In promising our lives to one another, we also promise them to our communities, our country, our world. To hold one another up, to love fiercely and unconditionally, to remember, even in the times of most trial, that we are all parts of one being, destined in our deepest hearts to honor and protect one another as we would honor and protect ourselves. . Never have two people felt luckier in their tribe than we have this week, surrounded by friends and family and music and laughter and wisdom and joy as we crossed the beaming threshold. . And never have I felt deeper love for this country, making our happy way back west, kayaking the great lakes and biking across the mighty Mississippi. Every time I think I know this land, it shows me something still richer, still more full of promise and beauty and hope. . May we each find in our love for those we most treasure a wellspring of love for those we don’t yet know. Or don’t think we want to know. Because that is the ultimate gift of love. It’s a fractal, an inexhaustible, self-replicating force, more powerful than division or darkness or fear. The way we love one person affects hearts in distant corners. Our ripples spread farther than we know. A single act of love can become a hundred thousand. And devotion to one beautiful, beloved other can heal the distance between us all. . #love #marriage #community #wedding #peace

On St. Patrick's Day 2018, a few months before she officially married into the storied Kennedy family, Fox shared the below post on her public Facebook page. She wrote: "Proud to be back in Chicago supporting Chris Kennedy for Governor and celebrating the boundless contributions of Irish Americans to our great country this St Patty’s Day.

"My grandmother used to tell me stories of the days when newspaper job ads ended in the acronym N.I.N.A — No Irish Need Apply. Today, other visionary, hard-working Americans hailing from other lands receive the same baseless discrimination when seeking ways to lend our society their talents.

"May we look to leaders on both sides of the aisle who prioritize the American Dream for all people. Who walk alongside us, even when it’s hard. Especially when it’s hard. Who understand that public service is our greatest calling, even when accompanied by trial and sacrifice. Who speak truth to power and hold no authority higher than their own moral true north. Chris is one of those leaders. I hope my Chicago family will turn out strong for him this week."

Proud to be back in Chicago supporting Chris Kennedy for Governor and celebrating the boundless contributions of Irish...

Her parents are an English actress and an American economist

Fox, born Amaryllis Damerell Thornber, was born in New York but traveled the world from an early age with her parents. Per her biography from WME Speakers, "her father's work focused on the developing world, moving their family every year of her childhood, and giving her an early sense of being at home in the farthest corners of Africa, SE Asia, Europe, and the former Soviet Union."

Her mother, Lalage Damerell, has since remarried to billionaire Steven Rales, who is known for his science and tech company Danaher and for producing Wes Anderson's films since 2007 with his production company Indian Paintbrush.

At the age of 18, Fox interviewed Aung San Kuu Kyi in Burma

At the age of 18, Fox landed an interview with Aung San Suu Kyi while in Burma. She told CBC Radio in 2019: "Yeah, my poor mother didn't find out about any of this until it was over, which was probably good for her. But I took this time off before college with the money she gave me to buy a prom dress and went over initially to work in the refugee camps on the Thai-Burmese border. I was aspiring to be a journalist at that time.

"While I was there the democracy movement secretly arranged a meeting for me with Aung San Suu Kyi, who was under house arrest at the time, and told me that I'd probably be detained as a result, and how to hide the film to get through that detention and get it out to Thailand. The meeting was very inspirational.

"Suu Kyi has come under a lot of fire since then about her failure to stand up for many of the ethnic minorities in Burma, but at the time, to my young mind, she was this tiny, petite single woman who, by telling the truth, could bring this entire military dictatorship to its knees. And taking her words out on on this film — and then being detained by that very military government, eventually being deported and getting those words out to Thailand, where they were broadcast by the BBC back into Burma — it was electrifying for me. It was this idea that truth can be more powerful than military force and that really began to shape my aspirations in the world."

When it was time to pursue her studies, Fox attended Oxford in her mother's home country of England, graduating in 2002, and then returned to the US to pursue her Master's in International Security at Georgetown University.

While at Georgetown, she developed a remarkable algorithm for predicting terrorist activity and was asked by the university's CIA Officer in Residence Dallas Jones to share it with Langley.

Per Fox's bio for Big Think, she "began work as a political and terrorism analyst for SE Asia, commuting between Langley and Georgetown to finish her degree with honors."

According to Big Think, Fox "moved into CIA's Directorate of Operations and deployed as a Clandestine Service officer, focused on counterterrorism and counterproliferation. She served in 16 countries in Africa, Asia, and the Middle East, before leaving government service in 2010."

Former CIA agent Amaryllis Fox worked undercover on counterterrorism efforts for almost 10 years. So we want to know, does she believe there are really good guys and bad guys in the world? What else should we ask her?

Amaryllis Fox became widely known in 2016 for a brave and truthful video interview with Al Jezeera (AJ+) about the biggest lesson she learned as a CIA agent: listen to your enemy.

The video went viral and has since been viewed over 100 million times.

This former CIA officer's secret life taught her one lesson: Listen to your enemy.

She has two daughters

Later, in 2019, she shared that she and Bobby welcomed a daughter together:

Magical hours and days these are. . Baby Bobby arrived safe and snug on January 7th at 6:27 pm. She’s named for her father, grandfather and great grandfather, carrying their legacy into a future where women stand shoulder to shoulder with their fathers, brothers, and sons to do the work of love in the world. May she hold in her heart their fathomless commitment to human dignity, peace among nations, and protection of our natural world. . During this pregnancy, Bobcat and I traveled many thousands of miles together, visiting distant corners of this beautiful earth, working with some of the world’s most poor and finding, again and again, human spirit so rich. . After that long journey, this littlest fur cub was born on the first day of epiphany, the season set aside by ancient christians to mark the realization that love vanquishes all. As I hold her softly breathing in my arms, surrounded by love in our warm den, that couldn’t feel more fitting. . Every day, we, each of us, experience the mysteries of life, of love, of family, of grace. May we revel in the vastness of the great beauty we share, strengthened to bridge the small details we do not. May we do right by one another, friends and strangers alike. Look after one another, protect one another, love one another the way we do our littlest ones. Because in the end, each of us is just a baby grown. Each of us, a caretaker in waiting. Destined to save and savor one another. United in a community I can only dream may one day be as filled to overflowing as our little bear pack feels tonight. 🐾❤️

She published a memoir

In 2019, Fox published "Life Undercover: Coming of Age in the CIA," which tells the story of her ten years in the most elite clandestine ops unit of the CIA, hunting the world's most dangerous terrorists in sixteen countries while marrying and giving birth to a daughter.

She's the host of a Netflix documentary

In June 2020, Netflix debuted its "The Business of Drugs" six-episode limited series, which is hosted by Fox.

America’s longest war has put more people in prison and morgues, while enriching more kingpins, militaries and power brokers than any other US policy today. . Our expose of this cruel overreach of government power, The Business of Drugs, is live on Netflix today. I hope you’ll come with us on this important and disturbing journey. . #thebusinessofdrugs #netflix #corruption #racism #abuse