Christie's Irish aides, Bridget Anne Kelly and Bill Baroni were sentenced to prison time today for their role in Bridgegate. 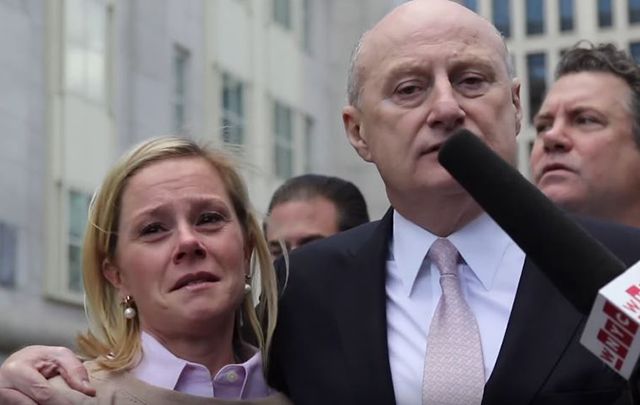 Bridge Anne Kelly gives a tearful press conference with her lawyer after the trial verdict. YouTube

The Bridgegate affair is the biggest corruption scandal to hit New Jersey in decades, which is saying something in the state known for such shenanigans. Today Christie's Irish aides, Bridget Anne Kelly and Bill Baroni (Irish-born but adopted by an Irish-Italian couple out of Ireland and still an Irish citizen) were sentenced; Baroni for 24 months, Kelly for 18 months.

Christie was in Washington in his new role as czar of the effort to wean addicts off painkilling drugs.

He should have been in the dock.

His aides deserved prison time, but so definitely did Christie.

From September 9 through September 13, 2013, two of the three traffic lanes in Fort Lee normally open to access the George Washington Bridge and New York City were closed on orders from a senior Christie aide and a Christie administration appointee. The lane closures in the morning rush hour resulted in massive traffic backups on the local streets for five days endangering lives.

If you believe that Governor Chris Christie did not know about the lane closings in Fort Lee that led to dreadful traffic jams and first responders prevented from reaching victims then I will sell you the George Washington Bridge where the lane closings took place.

Don't take my word for it. During the Republican primary for president, Donald Trump accused Christie of knowing about it and participating in a cover-up.

Christie is known as notoriously hands-on with a vengeful streak which no doubt he had his minions act on when the Mayor of Fort Lee refused to endorse him in his re-election race in 2013.

It was revenge against that Democratic mayor Mark Sokolich for refusing to endorse Christie in his runaway re-election that led to horrific scenes on the Fort Lee exit from the GW bridge as ambulances, school buses and commuters snarled up traffic for hours for what the defendants claimed was an experiment in traffic flow. An elderly woman died when help could not reach her.

Instead of putting Christie in charge of a drug program Trump needs to tell Christie “You’re fired.”

Don't feel sorry for Kelly, a mother of four, or Baroni.  What they did was despicable but it only gets stranger by the day that Christie was not in the dock with them.  The other character in the sordid mess is David Wildstein who turned in the state’s evidence against them.

Read More: "Bridgetgate" - Bridget Anne Kelly, the aide at the center of the Christe storm

Wildstein was known as a dirty operator, even in the jungle of New Jersey politics, so turning informer was no problem to him.

It was Kelly, prompted by Wildstein and with Baroni’s knowledge, who began the revenge reaction against Mayor Sokoloski. "Time for some traffic problems in Fort Lee.” she emailed Wildstein in December 2013.  Wildstein responded to Kelly's e-mail: "Got it."

In a text message the next day, Wildstein told Kelly about a text from Fort Lee Mayor Mark Sokolich in which he complained about the traffic jam and said, "The bigger problem is getting kids to school. Please help. It's maddening." Kelly replied, "Is it wrong that I'm smiling?"

Baroni stonewalled all the media inquiries said it was a traffic management exercise even though the jury clearly felt he knew exactly what it was.

Baroni and Kelly say Christie knew about the scheme and there is even a picture of him laughing heartily at what Baroni claims was information he gave him about the traffic jams before taking part in a 9/11 ceremony.

They want that mother of four to take the fall for them,” he said, at the time of Kelly's trial referring to Christie. “Cowards!” Critchley shouted. “Cowards!”

Christie made a “political calculation” to say he didn’t have know­ledge of the traffic scheme, Critchley said.

Baroni, who went to Ireland to fight for passage of the gay right to marriage referendum is a member of Ancient Order of Hibernians Msgr. Crean Division and he serves on the Board of Trustees for Visitation Home, a Catholic shared-residence for New Jersey residents with developmental disabilities.

He and Kelly go behind bars but the real culprit behind Bridgegate strolls into the White House and emerge with a new job. Jersey junk justice at its worst.