Putin invited McGregor to the 2018 FIFA World Cup final in Russia as his guest and the UFC star returned the favor by posting an Instagram tribute to the Russian President and enabling him to increase his soft-power. 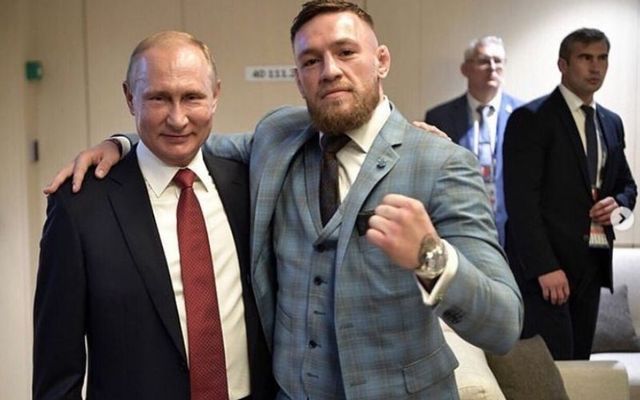 An Irish charity worker who was presented with a medal by Vladimir Putin in 2018 has revealed that the Russian President is a fan of Irish UFC star Conor McGregor.

Debbie Deegan, who established the now-defunct charity To Children with Love in 1998 after a visit to Russia, was honored for her work in 2018 at a ceremony in Russia.

She told RTÉ's Liveline that Putin presented her with the medal and talked to her about McGregor once he found out she was from Ireland.

"You are overwhelmed by him because of his preconceived notions of him. He knew I was from Ireland and asked if I had met Conor McGregor," Deegan told Liveline host Joe Duffy.

Putin invited McGregor to attend the 2018 FIFA World Cup in Russia as his guest and the UFC later posted an image on Instagram with his arm around the Russian President's shoulder.

In a sycophantic caption accompanying the image, MgGregor lauded Putin as "one of the greatest leaders of our time".

"Today I was invited to the World Cup final as a guest of Russian President Vladimir Putin. This man is one of the greatest leaders of our time and I was honored to attend such a landmark event alongside him. Today was an honor for me Mr. Putin. Thank you and congratulations on an amazing World Cup. Россия вперёд (Go Russia)".

The 2018 World Cup has now been recognized as a Russian "sportswashing" attempt, using sport to create a false image of the country around the world.

With Russia's notorious football hooligans kept off the streets, visiting fans reported a seamless World Cup with little to no trouble, helping to spread Russian propaganda.

"Everything the British government has said about Russia is a lie. It's propaganda. Fair play to Putin. He's done a brilliant job with the World Cup," one visiting English fan said.

Putin, who started a short but brutal war with Georgia in 2008 and annexed Crimea in 2014, leaving more than 13,000 dead, used events such as the World Cup to demonstrate that Russia was a modern and fair nation.

Russia used events like the World Cup and the 2014 Winter Olympics in Sochi to increase its "soft-power" and showcase a favorable image to domestic and foreign audiences, with Putin targeting famous personalities to help spread Russian propaganda.

The BBC reported at the time that the 2018 World Cup was a "resounding public relations success" for Russia.

Irish Examiner columnist Paul Rouse has compared Russia's hosting of the 2018 World Cup and the 2014 Winter Olympics to the 1936 Olympic Games in Berlin, describing the World Cup as a "grotesque spectacle of pretense".

"Throughout his time as leader of Russia, Putin has used sport to present a very particular image of himself and of his country. On the one hand, he has sought Russian success in international competition as a matter of national prestige. On the other, he has used major sporting events to demonstrate that Russia was a modern, normal state," Rouse wrote.

McGregor's decision to accept Putin's invitation and his subsequent decision to post a fawning Instagram tribute to the Russian President only served to bolster Putin's aims.

It's easy to see why Putin would like him.