"She survived and passed down a great appreciation for the needs not the wants." 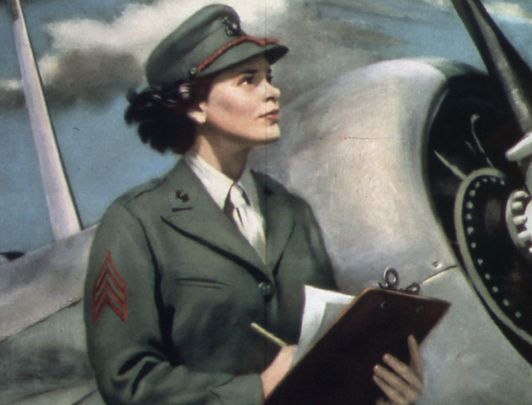 Illustration of a worker from World War II in the US Women’s Air Corps. US National Archives and Records Administration.

Descended from Irish emigrants, Claudia Morris's parents joined the World War II efforts from a deep sense of compassion. Lessons that we could use today.

“May the road rise up to greet you. May the wind be always at your back.
May the sun shine warm upon your face; the rains fall soft upon your fields
and until we meet again, my God hold you in the palm of His hand.”

An Irish blessing said many a time at too many funerals across our nation and across our homeland.

We blessed my mother, Genevieve (Doherty) Morris with the same blessing when she passed having lived a long life, raising ten children, after serving in World War II in the Women’s Air Corps and before that, a Rosie the Riveter for the Curtis Wright Plant.

Read more: Celebrating the Irish who fought in the Civil War this Memorial Day

Born in Buffalo, New York along with six siblings that were all broken up during the great depression. She survived and passed down a great appreciation for the needs not the wants.

She was an A+ student from the lessons of starvation as were the grandparents before her in County Mayo. Folks touched by starvation have a kindred spirit; a connection to their mortality and this Irish blessing like no other.

Starving children should never be. Not through my eyes seen nor through casual conversation. I remember peeling a raw potato as my mother used to, eating it raw out of sheer hunger. I cheated a bit if I wasn’t caught, by dippin' it into the sugar bowl. But, like many other days, that’s what we invented for dinner when my mother’s depression struck hard and my father was still away working at our family bakery.

I was, as well, an A+ student of starvation, and my compassion towards giving was harvested from the many trips I took with my father to deliver the day-old bread to our local orphanage and the cloistered nuns.

Read more: The five brave Sullivan brothers who died in WWII serving the US Navy

My father, now passed many years now, was also a descendent of our dear homeland of Ireland. A funny coincidence I guess that his immigrant was named John as well, like my mother’s immigrant, John Doherty in 1898.

His father came ashore much earlier in 1730 and bore a son William, my father’s namesake. Like William Morris who served in the War of Independence, my father, William Morris, won the Victory Medal, serving on the USS Richard Ward during World War II. Millions upon millions of lives lost and from it, a world united in a shared sense of purpose, a commitment to build an everlasting peace.

What inspired my parents to join the war effort was their compassion for those who were suffering under such tyranny, such as eminent mortality and loss of life.

Compassion is a powerful force of humanity and when combined with the love for a stranger. It can heal all our wounds of division if we find our connection through it. I truly believe that we discover this force when we least expect it, like we are finding it again in our hearts through the lesson of starvation experienced by our ancestors and the compassion, even through persecution, that emerged from a nation of Native Americans called the Choctaw. Who are these people from so far away across the great sea that can see and feel our despair?

Now, many Native Americans are asking the same question of us. Who are these compassionate people that remember the lessons of starvation and the compassion harvested as its fruit?

Let us never forget the sacrifices on this Memorial Day, the year of our loving Lord 2020, of the many who have sacrificed from a thousand years past to this very day.

Those who breathe compassion into the suffering, holding the hand of the thousands who are dying without someone. Those on the thin front lines of compassion.

God bless each and every one of you and may God hold you in the palm of his hand, til we meet again.

With great love and compassion,

A descendent of those who gave so that I could be here to give back.