Why I’m voting for Donald Trump in November 2020

As a card-carrying member of the Catholic Church and an opponent of any abortions after the first trimester, I believe Trump will safeguard millions of baby's lives. 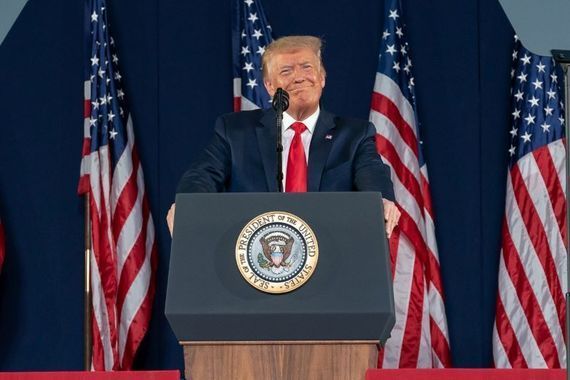 Trump is trailing Biden in the polls ahead of November's election. White House Flickr/Public Domain

As a card-carrying member of the Catholic Church and an opponent of any abortions after the first trimester, I believe Trump will safeguard millions of baby's lives by appointing pro-life judges to the Supreme Court.

I’m not an anti-abortion fanatic but I do strongly believe that viability of the fetus is the bottom line for me which is why I oppose any policy other than what say Ireland currently has, a first-trimester limit.

Secondly, I think Trump has done a remarkable job keeping the country safe. There have been far fewer terrorist incidents especially after he wiped out ISIS and Iran’s terrorist in chief.

He is about to extricate us from the hopeless war in Afghanistan, accepting reality there which no other American president did. Far fewer American soldiers have been killed on Trump’s watch than on any recent president’s time in office.

While his outreach to Kim Yung-un did not work it was certainly worth the effort to contain one of the world’s most dangerous leaders. Anyone got any better idea? Thought so.

Then there is the  “holier than thou factor: All the Never Trumpers to a man or woman were strong supporters and enablers of President Bush's failed war in Iraq. Now they have the gall to question Trump’s morality after they misled the US media and citizens about weapons of mass destruction.

4,500 dead servicemen and women and 32,000 injured is the sum of all their machinations to attack Iraq at any cost.

Trump has also stood up for veterans and expansion of the military, understanding the Reagan doctrine of “peace through strength” is the best way forward, not like Obama and his phony lines in the sand.

As regards domestic security I think Trump’s defense of American police officers is brave and needed. There are bad apples but every day our cops take on the most dangerous job in America and we need to help them rather than defend their budgets. Police reform that is sensible, especially a return to community policing in hard-hit crime areas, is the way forward.

Then there is the confidence our business background president gives Wall Street, even in the current terrible downturn, where stocks have held up remarkably, a clear sign of huge investor confidence that Trump can work his economic magic once again.

I am not blind to his failings. His handling of COVID-19 has been terrible and he should have left it to the medical experts from day one. He needs to reorder his priorities on that one and quickly. If he loses the presidency it will be on this issue

As for Confederate monuments, he is also on the wrong side of history but it will not damage him anything like the handling of the coronavirus will

Yet I would still prefer him to Joe Biden, a creature of Washington for over 50 years who has never run a business and always lived off a government check and whose best days are long behind him. Let’s call him Joe Status Quo, a candidate with few new ideas to offer who has spent his campaign being heavily managed by staff and operating out of a bunker. Hardly the can-do American way.

Biden will be ripe for gaffes when he does emerge. If you think that doesn’t matter consider how much Hillary’s “deplorables” comment hurt her.

Lastly, I do believe there has been a relentless assault against Trump from the day he took office. I’m not blind to his inadequacies but he is not the devil incarnate or the worst president ever.

Indeed, I was firmly convinced he was on his way to victory because of the runaway economic success the country was enjoying until the coronavirus struck.

I still think he is underrated. He starts with 40 percent of the vote. He won last time with 46.1 percent of the vote so he needs to pick up a further 7 or eight points. I believe he will do so during the debates, where Biden’s lack of mental acuity will become obvious.

In reality, it will be after Labor Day before this race will tighten. July polls are like last winter’s snow by November. When the going gets tough, Trump gets going. Biden has been a complete flop in his two earlier runs for president.

So it’s Trump for me in 2020. I know many will disagree but this is no ordinary man, instead, one who won the presidency on his first-ever political campaign. I believe he can confound the critics once again.

Read more: Trump is a racist Know-Nothing bigoted politician, not a Republican