When Nixon resigned - a history lesson in the time of Trump

Donald J. Trump’s presidency will “end without grace, without class, but with a guaranteed whine.” 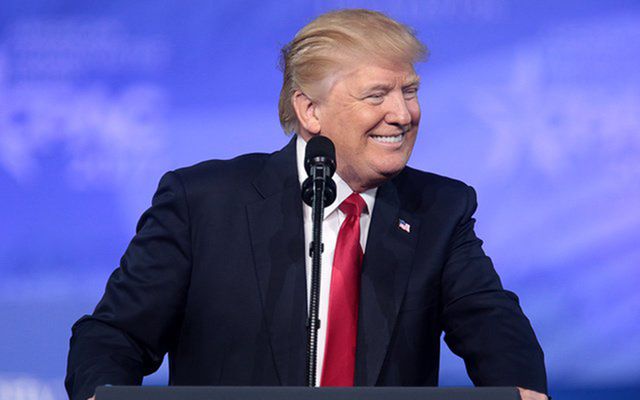 “It was as graceless at the end as it was at the start.”

Today, August 9, is the 43rd anniversary of Richard Nixon's resignation from the presidency. As with most bullies, Nixon went quietly, with his flaccid tail between his legs.

Hearing that Special Counsel Robert Mueller had impaneled a Grand Jury brought me back to another time, that time of Watergate. That time of the Nixon resignation. Suddenly today, in Washington, D.C., it looks a lot like 1974 again.

With all the turmoil surrounding Donald J. Trump I went to my bookshelves and pulled down a very old copy of Jimmy Breslin’s "How the Good Guys Finally Won: Notes from an Impeachment Summer," which was published in 1975. As I flipped through the first few pages I realized that this was a copy that Breslin had autographed for me. The inscription reads: “June 19, 1996. For Dermot McEvoy—Thanx for appreciating my personal favorite. Jimmy Breslin.”

Trump’s problems—Russian contacts, Special Counsel Robert Mueller’s Grand Jury, historically low poll numbers—bring us back to a previous time. That time was 1974 and the investigation into Richard Nixon’s Waterloo, Watergate. To review the history of Watergate, the gold standard is Woodward and Bernstein’s "All the President’s Men." The book is basically a mystery with lots of cloak and dagger operatives on both sides. It is an investigation into the “third-rate burglary” from day one. If "ATPM" is the pursuit of the crime; "Good Guys" is a look at the prosecution.

President Richard Nixon eventually resigned, could this be the path Trump's following.

Breslin’s book takes a different tack from "ATPM." It is a look from inside the Democratic leadership and how they plotted the fall of Nixon and his henchmen. Today, it seems that we are reliving the same nightmare with Trump. It’s people like Trump that gives life to America’s political "Groundhog Day."

“For a little island, it has caused so much pain,” is Breslin’s description of Ireland. "Good Guys" is a very Irish book. Its heroes are its writer, Breslin, and Massachusetts Congressman Thomas P. (Tip) O’Neill, who is described in the flap-copy as being from “the wrong side of Cambridge,” meaning the side that didn’t contain Harvard University.

“He comes with the full blood,” wrote Breslin of O’Neill, “of Cork City in his face.” O’Neill is a grandson of the Great Hunger and in their pursuit of the American Dream the O’Neills' first investment was in “the Irish stock market—cemetery plots.”

Being Irish, Breslin is a great believer in Original Sin and the workings of the Catholic Church. “Into the second-floor offices of the Special Counsel to the Chairman of the House Judiciary Committee came thirty typists. Most of them had been picked because they were graduates of Catholic high schools. They were trained by nuns to believe in causes, and now they were to work on another cause, the greatest search for justice in the nation’s history.”

O’Neill’s Irish-Catholicism, Breslin believes, had a lot to do with the decency that emanated from O’Neill: “In a time of lies and fear and weakness and hypocrisy, in a time when evil was matched against evil and the results were pronounced as good, O’Neill provided a few shafts of sunlight, of charm and humor and mature compassion. Nobody ever said you have to torture life to produce history.”

It may be tragedy, but you can still laugh

Breslin’s book is very serious and thoughtful—a textbook on how political power works—but it is ripe with humor, some of it laugh-out-loud funny. The Irish, well aware that life is tragedy, have learned to laugh through famine and revolution and this black humor is how Breslin and O’Neill viewed the sewer of Watergate.

O’Neill, who said “Money is the mothers’ milk of politics,” tells a very funny story about his friend John F. Kennedy raising money for his run for president in 1960. Tip is collecting money all around the room and ends up in a closet with the future president. “Now I have twelve thousand in cash and seventeen thousand in checks, what do you want me to do with it?” O’Neill asked Kennedy. “Give the checks to Kenny O’Donnell,” said JFK. “I’ll take the cash.” Now you know how millionaires stay millionaires.

There is also this priceless story about Nixon pitying himself and threatening suicide. “Early in the going, Nixon is supposed to have mentioned something about committing suicide. And [Chief-of-Staff Alexander] Haig supposedly said, ‘That might be an idea worth considering.’ And Nixon didn’t speak to Haig for about a week.”

Even the story about how O’Neill knew early on that Nixon had the White House bugged is funny. It happened at a dinner the night the Vietnam War ended. “As [Nixon’s] saying this, he first has raised his voice. Then I see he’s looking upward, at the chandelier or whatever was there…Now I see he’s not only looking up, but he’s pointing with his finger, as if he’s talking to somebody up there. And I say to myself, 'You’ve got to be kidding. He has this place bugged.'”

For O’Neill, it all started with George Steinbrenner

O’Neill was the Majority Leader back then and he was the quarterback of the whole impeachment proceedings in the House of Representatives. O’Neill’s first hint that something was going on with Nixon’s Committee to Re-elect the President, fondly referred to as “CREEP,” was when regular Democratic contributors suddenly dried up as the 1972 presidential election approached.

It got O’Neill’s attention in the form of one George Steinbrenner, who would go on famously to own the New York Yankees and be known to all as “the Boss.” Well, back then he was not the boss, only a very frightened owner of a shipbuilding company in Cleveland. Steinbrenner was nervous because all of a sudden he had IRS problems and was told they would go away with a $100,000 contribution to CREEP. O’Neill soon found out that this same scenario was happening to many loyal Democratic contributors. [BTW, the cowardly Steinbrenner became a federal felon when he used employee kickbacks to fuel the dough to Nixon.]

O’Neill, of course, was no political virgin. He knew politics was down-and-dirty warfare, but this time, this time of Watergate, he was seeing something different, something more blatant. “All my years tell me what’s happening,” said O’Neill. “They did so many bad things during that campaign that there is no way to keep it from coming out. They did too many things. Too many people know about it. There is no way to keep it quiet. The time is going to come when impeachment is going to hit this Congress and we better be ready for it.”

O’Neill keeps his eyes on the prize

The impeachment of Richard Nixon depended on several serendipitous things. A congressman dying in a plane crash, allowing O’Neill to skip to the top of the leadership. The chairman of the Judiciary Committee being beat in a primary, allowing Peter Rodino to ascend to the chairmanship.

There was also the case of Vice-President Spiro T. Agnew. Everyone knew Agnew was a shakedown artist right up to his time as governor of Maryland. He was still taking bribes as the Vice President of the United States. With the government hot on his tail, Agnew went to the House and begged to have his case turned over to the Judiciary Committee where it could go on for years. O’Neill said no, you’re on your own. A couple of weeks later Agnew pleaded Nolo Contendere and the House Minority Leader, O’Neill’s friend Jerry Ford, became Vice President. If O’Neill hadn’t stood up to Agnew you would have one crook in the presidency followed by another crook.

The cheap bigotry of Nixon is very much like Trump’s. Everyone knows about Trump’s open bigotry, be it aimed at Mexicans, Muslims, women, or the victim du jour. Trump is blatant; Nixon was subtle, in public at least. In private, with the tape recorder listening, he was just as bad as Trump.

When Nixon realized that Peter Rodino, an Italian guy from Newark and Chairman of the Judiciary Committee, would be running his impeachment he went full-throttle: “The Italians…They’re not, ah, they’re not like us. Difference is, the…they smell different, they look different, act different…The trouble is, you can’t find one that’s honest.”

When Rodino heard the president saying this stuff he was crestfallen. They went after Rodino, a man of dignity and restraint, in different ways. An old congressional friend of Rodino’s, Neil Gallagher, was in federal prison for stealing. He couldn’t get a break in the Nixon justice system. He was told that if he had anything on Rodino his problems would go away. Insulted for his friend Peter Rodino, Neil Gallagher kept his trap shut.

Will it end for Trump the way it ended for Nixon?

The amazing thing about this book are the personalities. You read it and, up and down, Democrat and Republican, and find name after name of those who were convicted as felons thanks to Watergate or Abscam. Yet, there are real men, on both sides of the aisle, who want to do the right thing, like O’Neill, Rodino, Jerry Ford, and John Doar, the fearless majority counsel, who stand out heroically. It’s an amazing comparison to the likes of spineless Republican leadership of Paul Ryan, Kevin McCarthy, and the dearly departed Reince Priebus. One wonders what happened to American manhood in the last 40 years. What caused it to shrivel up?

In the end, O’Neill had the votes and Nixon was out the door. O’Neill’s friend Jerry Ford would be the new president. And it’s refreshing to read what O’Neill had to say to Ford just before he took the oath of office: “Christ, Jerry, isn’t this a wonderful country? Here we can talk like this and you and I can be friends and eighteen months from now I’ll be going around the country kicking your balls in.” Then they both laughed.

It’s a big difference from today when you have a president who goes around the cabinet table waiting to be told he is the-best-president-who-ever-was by a bunch of soulless sycophants. It recalls something O’Neill said, “Class really stands out when there is no class.” And in the Trump Administration, class has been dismissed.

To Nixon, Watergate was “this piece of shit.” To Trump, Robert Mueller’s investigation into Russia’s interference in the 2016 election is a “witch-hunt.” How will it all play out? Who knows? It will probably take at least a year.

But when I think of Trump, the thing that comes back to me from "How the Good Guys Finally Won" is the first line of the book: “It was as graceless at the end as it was at the start.” You just know, be it two years or four years, this is how the presidency of Donald J. Trump will end. Without grace, without class, but with a guaranteed whine.