Donald Trump may have drawn hundreds of thousands of demonstrators; he may have made several errors. But he got one important thing right on his visit to Britain. 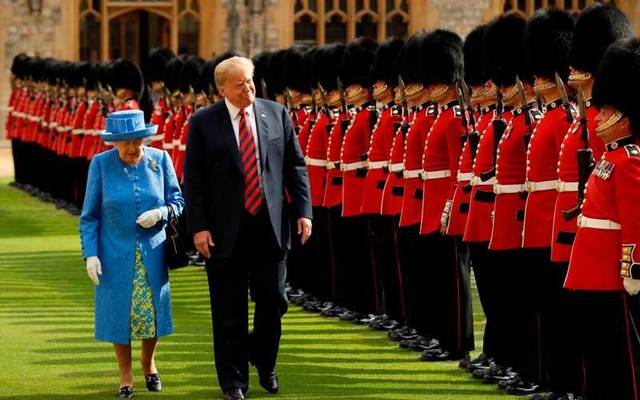 Donald Trump may have drawn hundreds of thousands of demonstrators; he may have made a cardinal error by attacking British leader Theresa May before he met her. He may have thought Ireland was in the UK and Scotland was not.

But he got one important thing right on his visit to Britain. He refused to bow his head when meeting the Queen, and Melania did not curtsey.

Call me old fashioned, but I believe in this Republic and what it stands for -- equality for all. Our constitution was written so that foreign kings like George 111 would never hold sway over our land.

That means no bowing and scraping to monarchs.

Read More: Trump baby balloon takes to the skies as the UK protests US President's visit

The British tabloids of course got their knickers in a twist. They explained the rules and what actually happened.

Did Donald Trump forget to bow to the Queen?https://t.co/vWRbsYIyOw pic.twitter.com/1LqegajmPH

“The President and First Lady did not bow or curtsy, but shook hands with Queen Elizabeth upon greeting her. Technically, bowing and curtsying are not required; there is no official rule stating that one must do so, but it is considered a major faux pas to not bow or curtsy when meeting the Queen, and just about everyone follows this unwritten rule when they meet Her Majesty.”

If the British people wish to bow and scrape to the monarchy that is their prerogative, but please don’t expect American leaders to do it.

Trump clearly knew that and made it a handshake. In so doing he never breached protocol like some other presidents did.

Especially Jimmy Carter. The plain old Georgia peanut farmer got his diplomatic signals mixed up when approaching the Queen and the Queen Mother.

Donald Trump walking in front of the Queen will make you rage. ???

According to royal etiquette, one should never turn their back on the monarch, or walk in front of her. ?
Bad move Donald. https://t.co/XFmGEDsV8i pic.twitter.com/72Irzi70JP

“U.S. President Jimmy Carter only visited the British Royal Family once during his presidency but, in that short time, he made a very strong impression. In London for an economic summit in May 1977, Queen Elizabeth II invited Carter to Buckingham Palace. While meeting her and other members of the royal family, Carter broke protocol and kissed the Queen’s mother right smack on the lips.

Carter’s Southern hospitality did not sit well with the Queen Mother (1900-2002), who snapped.

“Nobody has done that since my husband died.” (Her husband, King George VI, died in 1952).

Read More: Someone should tell Trump Ireland is not in UK

Apart from Jimmy, Jackie Kennedy made a stir when she later criticized the Queen as fuddy-duddy and poorly dressed.

Gerald Ford danced with her; Ronald Reagan went horseback riding with her, while George Bush took her to a college football game.

Nancy Reagan wanted to curtsey, but Ronald was having none of it.

In that respect, Donald Trump was upholding a strong American ideal All are created equal. We don’t do bowing and scraping. God might save the Queen, but he saves the Republic too.