No TVs, no cellphones, just people chatting, often working, and enjoying the calm of this secret bar in Dublin city center, dating from 1887. 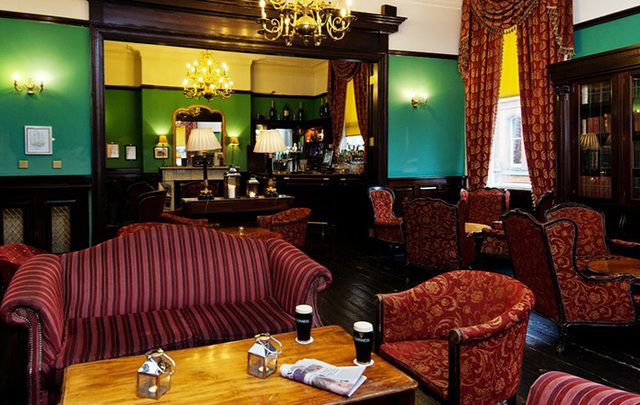 The cozy comfort of a real bar...The Library Bar, at The Central Hotel, Dublin. CentralHotelDublin.com.

Dublin: “Great saloons,” Joe Flaherty—the stevedore-turned-writer of Village Voice fame—once observed, “combine the best aspects of the womb and the coffin.” To those of us who view drinking as a somewhat religious experience, there is heresy in the land. For most of us Old School drinkers, “Womb & Coffin” would come to symbolize something missing in most bars—quiet.

I don’t mean the quiet of compelling conversation but the injection of noise—noise from the TV (whatever happened to the mute button?), noise from radios, noise from jukeboxes and off-key bands who should not be allowed near an electrical outlet.

This insidious infection has even spread to Dublin, the town of the original Womb & Coffin drinking experience. Dublin still has many beautiful Victorian pubs, but slowly and ineluctably, the noise virus is spreading. Even in such hallowed spaces as The Hut in Phibsborough—home to the sanctified snug—the TV is king, with one on each end anchoring the bar.

At the Palace Bar on Fleet Street and the Stag’s Head in Dame Court, your eye is drawn to the rafters where stuck in two-century-old bulkheads, you’ll find the one 20th-century technology that caused more damage to the world than the atomic bomb—the television set. It’s usually on for a match or the Olympics, but most of the time, it seems, it’s only on for the noise. (There is something surreal about sipping a pint of Guinness in Dublin as Judge Judy looks down on you with her signature strained look of disapproval.) At The Long Hall on South Great George’s Street, I spied a flat screen TV in the middle of the back room.

I asked the proprietor, Marcus Houlihan, how he could have a television in this sacred Victorian pub? With a sheepish look on his face, he pointed above the front door and said, “I have two!” But Houlihan insists the sets are only on for Irish national games, like an All-Ireland hurling match. Otherwise, silence is observed.

There is one oasis left in Dublin City where Womb & Coffin is still held holy. That place is the Library Bar in the Central Hotel on Exchequer Street. Snugly fit between Dublin Castle and Trinity College, just off Dame Street, the Library Bar can be noisy, but it is with the hum of sacred conversation. Mobile phones may still vibrate, but they are largely ignored for the major purr of face-to-face human conversation. (And it’s not unusual for people answering their mobiles to courteously leave the room.) At the Library Bar, you’ll hear conversations in English, Irish and just about every other language of the world.

The exterior of The Central Hotel.

It is unique in that the Library Bar is not only loved by drinkers, but by non-drinkers. Afternoons are filled with prim ladies off a shopping spree in nearby Grafton Street, demurely sipping their tea. Early evenings can be filled with students from nearby Trinity College having a conference over the day’s classroom events. Actors often huddle over coffee or a pint after their auditions are concluded down the hall at the Central. On the eve of an All-Ireland final, the place will be packed with loyal fans of both teams. So the Library Bar is an everyman’s land—as long as the everyman likes to talk.

The history of the Central Hotel goes back to 1887 when it was built. It takes up almost the whole block on South Great George’s Street between Exchequer Street, Dame Court, and Dame Lane. Directly across the street from the entrance is #10 Exchequer Street, which was revolutionary Michael Collins’ first office back in 1917 after he returned from Frongoch prison in Wales. It is said that Collins put up IRA men from the country at the Central Hotel when they came up to Dublin for interviews with The Big Fellow. It is also said that the Central was used by the British to put up their men during the Troubles. The lobby of the Central must have been a very interesting place in 1920.

George's Street, during the 1800s. Central Hotel visible to the far left.

Although the Library Bar looks like it has been here since the early 20th century, in reality, it is just about 25-years-old. After some hard times in the 1970s and ’80s, the Central Hotel reopened in 1991 and soon thereafter the Library Bar was established. According to its former general manager, Myles Tuthill, the three big rooms that make up the Library Bar were previously used as office space. The rooms have that “Womb & Coffin” feel with hardwood floors, heavy drapes, and cabinets filled with volumes of books. There are two working fireplaces surrounded by overstuffed chairs and sofas. Along with the soft conversations, the tap-tap of laptops can be heard as patrons take advantage of the free and very popular Wi-Fi.

The bar at the Library Bar, at The Central Hotel.

Although not a celebrity hangout like the nearby Clarence Hotel in Temple Bar (owned by Bono and The Edge of U2 fame), the famous have been known to show their faces at the Library Bar. Martin O’Malley, former governor of Maryland and failed 2016 presidential candidate, was recently seen there. Singer Shane MacGowan of the Pogues, actors Stephen Rea ("The Crying Game," "Michael Collins") and Brendan Gleeson ("The Treaty;" "The Guard") have been known to raise a pint there. (It should also be noted that the Central’s bridal suite is named after a couple of famous guests—Simon & Garfunkel!)

The man in the know around the Library Bar is senior duty manager Brendan O’Sullivan, an eight-year veteran. When asked if he could pick one thing that explains the success of the bar he said: “Unique. Our business model goes back to how pubs used to be—never the omnipresent TV with scores, news on, no crashing base music, just the long, lost art of conversation.”

The Library Bar has an edge over neighboring pubs too. “It’s very friendly,” says O’Sullivan, “efficient with professional service, with a decent portfolio of product.  We’re a pub in a hotel rather than a hotel bar.”

So the next time you’re in Dublin drinking in a pub and feel put-upon as Judge Judy stares down and barks at you from the TV, your great escape might be just around the corner on Exchequer Street, home to the Central Hotel and the greatest “Womb & Coffin” meeting place in Dublin City, the Library Bar.

The cozy and intimate Library Bar, at Central Hotel.

* Dermot McEvoy is the author of the "The 13th Apostle: A Novel of a Dublin Family, Michael Collins, and the Irish Uprising" and "Irish Miscellany" (Skyhorse Publishing). He may be reached at dermotmcevoy50@gmail.com. Follow him at www.dermotmcevoy.com. Follow The 13th Apostle on Facebook at www.facebook.com/13thApostleMcEvoy.