The modern-day bard of Ireland and the genius of Irish ballad and rebel music died 10 years ago this year. 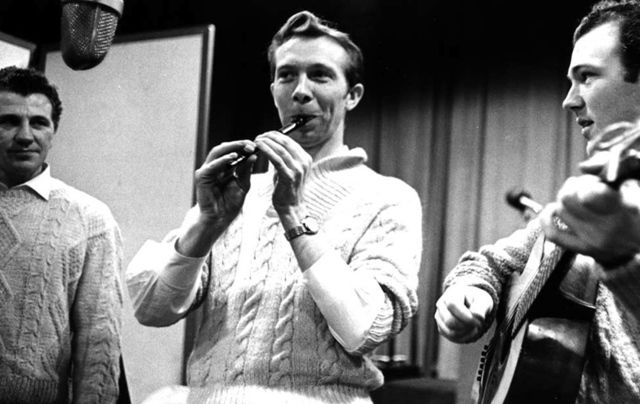 Tommy Makem who was widely regarded as the modern-day bard of Ireland and the genius of Irish ballad and rebel music died 10 years ago this year. He is still deeply missed.

Armed with his banjo, tin whistle, poetry, stagecraft and his magnificent baritone voice, Tommy mesmerized audiences for more than four decades. Simply put, his contributions to Celtic culture cannot be overstated. He expanded and reshaped the boundaries of Irish culture, and infused a pride in that culture in the Irish, and a quest for knowledge of that culture in countless others.

For a period in the mid ‘60s he was among the best-known Irishmen in the world as The Clancy Brothers and Tommy Makem took America by storm. Among the highlights were the Ed Sullivan Show which 60 million people watched and a concert for JFK which the president attended,

The four Irish performers revived an entire tradition of ballads and folk songs that had long been ignored and they spearheaded a massive revival that has lasted to this day. The Irish folk tradition had been cast aside as the songs of poor people. Count John Cormack the great tenor had more imitators than anyone. Irish folk music did not count. The Clancys and Tommy Makem changed all that.

Makem wrote dozens of hits that are forever embedded in Irish pub jukeboxes on either side of the Atlantic. His best-known songs include “Four Green Fields,” “Gentle Annie,” “Red is the Rose,” The Rambles of Spring,” “The Winds Are Singing Freedom”, and “Farewell to Carlingford

“Four Green Fields” has become a classic, Makem frequently described the song as having been inspired by a drive through the borderland with Northern Ireland, where he saw an old woman tending livestock. She was oblivious to the political boundaries that loomed so large in the public's eye; the land was older than the argument, and she didn't care what was shown on the map. The ballad is one the most famous of the Troubles era.

Makem was born in 1932 and raised in Keady, County Armagh (the "Hub of the Universe" as Makem always said), in Northern Ireland. His mother, Sarah Makem, was an important source of traditional Irish music,

His father, Peter Makem, was a fiddler who also played the bass drum in a local pipe band Young Tommy Makem, from the age of 8, was a member of the St. Patrick's church choir for 15 years where he sang Gregorian chant and motets. He did not learn to read music but he made it in his "own way".

Tommy’s ambition to become an actor took him to New York where, after a brief but rewarding career in live television, summer stock and Off Broadway plays, he teamed up with Liam, Tom, and Paddy Clancy. Folk music was the “in” music in 1961 and when Tommy appeared at the Newport Folk Festival, he and Joan Baez were chosen the two most promising newcomers. Both fulfilled that promise.

During those early days, the Clancy Brothers and Tommy Makem were heavily influencing a folk movement in the States; they counted Bob Dylan as one of their biggest fans. “Topical songs weren’t protest songs,” Dylan wrote in his memoir Chronicles Volume One.

“What I was hearing pretty regularly, though, were rebellion songs, and those really moved me. The Clancy Brothers — Tom, Paddy and Liam — and their buddy Tommy Makem sang them all the time.” That love affair carried on into the decades. In 1992, Makem and the Clancys were among the stars performing in a gala tribute to Dylan at New York’s Madison Square Garden. Eric Clapton, George Harrison, Johnny Cash, Willie Nelson, Tracy Chapman and Dylan himself also took part.

Together with the Clancy Brothers, Tommy appeared on The Ed Sullivan Show, the Tonight Show, and on every major television network show in the U.S.

They soon became the four most famous Irishmen in the world. They played to SRO audiences from New York’s Carnegie Hall and London’s Royal Albert Hall to every major concert venue in the English-speaking world.

In 1969 Tommy left the Clancy Brothers to pursue a solo career and immediately sold out the Felt Forum in Madison Square Garden in New York. His popularity soared, and he went on to three sold out concert tours of Australia, including Sydney’s Opera House, three in the United States and several in Canada, Ireland, England, Scotland and Wales and all within a two-year period of time.

Tommy continued his concert career on a solo basis until July of 1975 when he was booked for a festival in Cleveland, Ohio. Liam Clancy was booked as a solo act for the same festival.

Tommy and Liam were persuaded to do one set together and thus began Makem and Clancy, the magical combination which was to last until March of 1988 and which garnered them an Emmy nomination for a TV series done with New Hampshire Public Television as well as several platinum and gold records.”

In later years, Makem continued to give back to the Irish culture by lending his formidable brand to arts and culture. The first Tommy Makem International Festival of Song was held in South Armagh in June 2000.

Tommy was said to be especially proud of the brilliant success of this event, which drew people from U.S., the Netherlands, Germany, Poland, England and of course, many from other parts of Ireland to mingle with the locals.

Asked once if he had any plans to retire, he replied “Yes, of course, I retire every night and in the morning when I awake I realize just how lucky and privileged I am to be able to continue doing the things I love to do.”

President Mary McAleese of Ireland led the tributes to Makem after his death in 2007. “Always the consummate musician, he was also a superb ambassador for the country, and one of whom we will always be proud,” McAleese said

“Tommy was a man of high integrity, honesty, and his courage really shone through towards the end,” Liam Clancy told RTE Radio in Dublin. “He just had the knack of making an audience laugh or cry... holding them in his hands.”