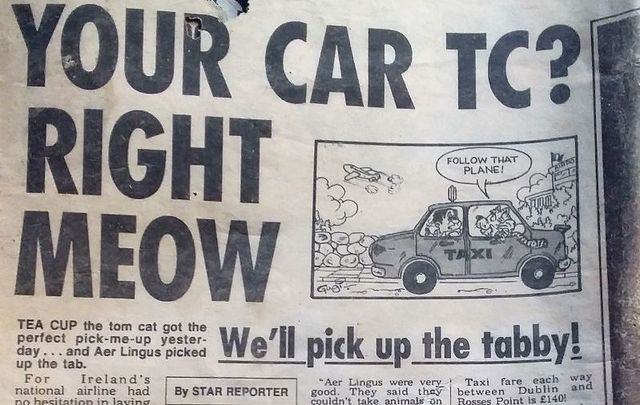 Back in the 1980s in Sligo, my late wife Sarah Cullen and I were walking home from Austie’s Bar on a cold, wet stormy night when we found the ginger Tomcat kitten shivering on the road below our holiday home in Rosses Point.

The morning after the storm, our neighbour old Mrs. Gillen was hanging out her washing on the clothesline. She named the ginger Tomcat 'Teacup' because he was so tiny he fitted onto a saucer.

But after a week of nurturing on buttermilk and the occasional drop of Mrs. Gillen’s medicinal brandy, he was fit enough to travel from Sligo back to London where we lived and worked when we weren't at home in Rosses Point.

In London, Teacup quickly became a regular commuter on the new Ryanair flight from Luton to Knock in Mayo. That was until we decided to try the Aer Lingus service from Heathrow which involved a change at Dublin to the commuter plane to Strandhill, nearer to home than Knock and just across the Bay from Rosses Point.

And in those days, Aer Lingus was cheaper.

“Where are you going with the cat?” asked the check-in man at the transfer desk in Dublin. “The hold isn’t pressurised, so we can’t carry livestock.”

I said that I had a ticket for Teacup and had paid five pounds for his passage.

“Well then you can fly to Sligo and we'll send the livestock by car,” he said.

“We had a python we had to send by road to Cork last week.”

A few hours after we landed, Teacup arrived in Austie’s Bar in Rosses Point in a chauffeur-driven limousine.

The following morning, the tabloid newspapers were all over the story.

“Follow that plane,” said the cartoon in the Irish Daily Star which showed Teacup pointing his paw out of the window of a taxi.

My wife, the Independent Television News correspondent  Sarah Cullen, told the regulars in Austie’s that she was the only redhead to show her ginger pussy on page three of the Irish Sun.

An invitation from Gay Byrne to appear on The Late Late Show followed, but we turned it down because the Aer Lingus limousine was waiting to bring Teacup back to Dublin while we queued at Strandhill for the first leg of our return flight to London.

Teacup lived to the ripe old age of twelve. When he passed away in London, Sarah had him cremated, and word quickly reached Paddy Clancy, a Sligo-born reporter who at the time was working for the now long gone Sunday Press Newspaper.

I told Paddy that after a memorial service in Westminster Abbey, we planned to scatter Teacup’s ashes over Sligo Bay and the story made the front page of the paper.

The following morning, the Aer Lingus commuter flight flew low over Rosses Point on its approach into Strandhill and old Mrs. Gillen let out a roar.

“Take in the washing,” she shouted at the neighbours. “They’re scattering the ashes already.”