The remaining symbolism of Catholic heritage in Ireland

While the Catholic religion might be on the decrease in Ireland relics of the strong Irish belief still remain. 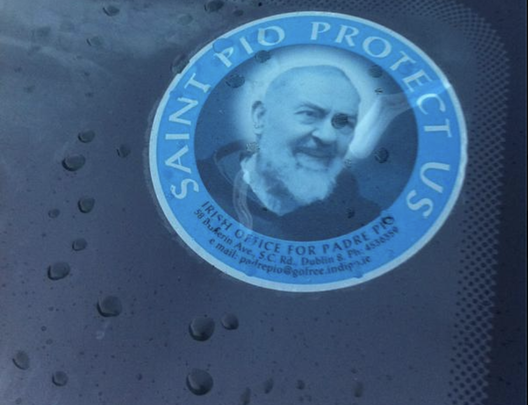 Ireland,  in the last centuries, without a doubt has been considered as one of the most Catholic countries in the world. In fact, research conducted by the Central Statistics Office shows in the last religious census of 2016 that 78.% of the Irish population were identified as Catholic, numbering approximately 3.7 million people.

Furthermore, if on one hand, this trend has seen a significant decline from the 84.2% who identified as Catholic in 2011, on the other hand, the perception of Ireland as a Catholic country could still be felt by observing the national culture, the customs, or simply by observing “religious symbolism ” that is related to it, which we can verify in daily life.

If you are in Ireland and you go to buy something in a small shop, especially if this is located in proximity to a church, you’ll probably see these charity boxes strategically placed close to the till so that you can drop some coins in them.

They have been used by the parishes (or by some associations) to collect funds for different projects such as fighting poverty, building a school, feeding the homeless, or organize a Pilgrimage to visit holy places such as Knock, Medjugorje, rather than  The Vatican State.

As the above picture displays, in the emerald island it is very common to see religious car window stickers. For instance, there is Padre Pio, with over 35 prayer groups. Yet, besides being one of the most prayed to saints in Ireland, he is the most popularly selected figure for stickers, especially by families and the elderly.

Following popular religious beliefs, it is believed that having a religious adhesive sticker on a car keeps the driver and the passengers safer, blessing them to have a lovely trip.

This last example is a must that could be admired if entering some Irish houses like the one of my old Catholic friend Denys, a retired Dubliner who lived part of his life between America and Australia before coming back to Ireland to spend the rest of his time.

While  I am eating bacon and cabbage at his house, he often remembers the importance of having that clock as a blessing for his own place.

“This is not only a clock he says,  I had brought this article with me everywhere: In Australia when I worked as a painter and in the USA where I worked without having papers. It reminds me when it is time for prayers, for mass and furthermore, it reminds me that Jesus is part of our legacy, part of our time, part of our Irishness. Now that I’m living in Ireland," Denys concludes. "It keeps the same company it used to keep throughout my life."

In the end stories like Denys’s one, like those of the drivers who seek protection from a saint by putting the stickers on their cars or like the story of the shop’s owner that helps the church through displaying the donation box close to the till represents a part of Ireland that nostalgically remember its own traditions with the hope that those may be handed down to the future generations.