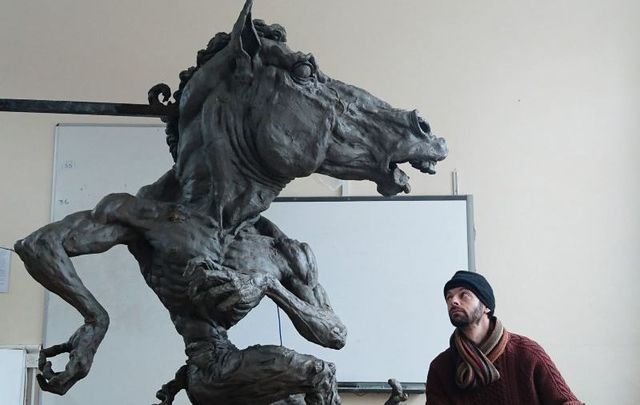 I have been following the story of The Púca of Ennistymon with great enthusiasm since it broke earlier this year.

I’ve even had the opportunity to speak with its creator, Aidan Harte, on The Hut Near The Bog podcast.

Clare County Council recently put plans to erect the Púca on hold until the Fall/Autumn. Before these plans are revisited, now seems like a good time to make an appeal to the people of Ennistymon to support what I consider to be a magnificent piece of art and something which, I believe, will be of great benefit to the town.

I want to begin by first addressing some of the major concerns around the sculpture.

One of those espoused by its detractors is that it is, among other things, “sinister,” “grotesque”, and “fearful.” In my view, these claims somewhat miss the point of the Púca and are not fully reflective of the nature of the spirit itself. Indeed, it seems to me that the statue and the spirit it represents resembles - to some degree - aspects of our own human nature.

The 17th-century philosopher, Thomas Hobbes, once claimed that as humans we are naturally vainglorious and so seek to dominate others and demand their respect. At the heart of Hobbes' thinking was the view that we are fundamentally self-interested and thus act accordingly.

Indeed, like humans, the Púca is certainly a spirit that acts in its own self-interest. A notorious prankster and shapeshifter, the Púca most commonly appears as a sleek black horse with a flowing mane and luminescent golden eyes and is noted for taking great delight in throwing a (usually drunk) travelling companion on its back and taking them over ditches, rivers, and mountains, and then shaking them off in the dusty light of the early morning.

Yet, the Púca also resembles another side of human nature that Hobbes perhaps missed in his own analysis.

Interestingly, this is a theme that is reflected in the Púca spirit, as the Irish Folklorist, Steve Lally, points out, the Púca “possesses great wisdom and can often be beneficial to folk.” To be sure, the Púca is noted for stopping wayfarers and engaging in conversation, often offering great advice and making exceptional prophecies.

So, we can see, while on the one hand, the Púca is capable of great mischief, it can also be a generous spirit. I would even go as far as saying that this complex character - is to some degree - reflective of human nature in general.

In this context, I feel a reappraisal of the sculpture itself is needed, obviously, on some level, it is intended to be grotesque, sinister, and mischievous, and on another, it is meant to be fun, boisterous, lively, and full of merriment.

Another concern relates to the heritage of Ennistymon. Yes, it is true that there is no Púca associated with the town itself, and this makes sense, because you’d be unlikely to encounter a Púca in an urban area. You would, however, be much more likely to encounter one in rural areas, and to be sure, there are certainly strong links with the Púca in rural areas close to Ennistymon.

For example, a Púca was reported to once haunt a location near Rineen National School and in a similar vein, Thomas Johnson Westropp tells us that “supernatural, but evidently material, were the horses which came out of the caves of Kilcorney in the heart of the Burren for they left descendants, noted for their high spirits and fierceness, by earthly mares in the valley.”

More generally, there are Púca stories dotted throughout county Clare and one of Clare’s most famous sons, Brian Boru, is said to have been the only man to ever successfully ride and tame a Púca.

On this basis, it would seem to me that there is a sufficient Púca tradition in the areas surrounding Ennistymon (and in Clare more generally) to support the erection of the Statue (Maybe a rethinking of the name would aid this idea? The Púca of North Clare/West Clare?).

Whether or not you agree with the above, the sculpture surely represents a unique opportunity for Ennistymon. The level of controversy surrounding the statue has generated a national and international conversation which has brought a great deal of publicity to the town. If the statue is cast and erected in its intended location it will surely have a positive impact in terms of tourism and will increase linger time around the town. I for one can say, if erected, the next time I am in North Clare/West Clare I will be making a stop to look at and take a few photos with this magnificent fellow.

Indeed, the irony in all of this, is that, due to the furore surrounding the statue, the Púca, cast or not, is now part of the fabric and story of the town. And when all is said and done, if Ennistymon, does not erect the Púca, then somewhere else will.

It has been well reported that Mr. Harte has received a wide variety of offers from around the country, with locations in Galway and Dublin being mooted as top contenders.

In my mind, there is little doubt that this magnificent piece will be cast and erected somewhere in Ireland. The question remains, however, who will benefit from it and the now famous/notorious story around it? Ennistymon or already booming tourist areas such as Galway or Dublin?

Hopefully, those whom the decision falls upon will stumble across a friendly Púca offering some great advice before the opportunity is missed...

Dr. James Hoctor is an Associate Fellow of the Higher Education Academy and co-creator of The Hut Near The Bog podcast. He holds a Ph.D. in Philosophy from the University of Kent and is a contributor for IrishCentral. You can listen to his interview with the creator of The Púca of Ennistymon, Aidan Harte, at TheHutNearTheBog.com or on Spotify or Apple Podcasts.

To support the erection of the Púca in Ennistymon please send an email to Clare County Council at customerservices@clarecoco.ie