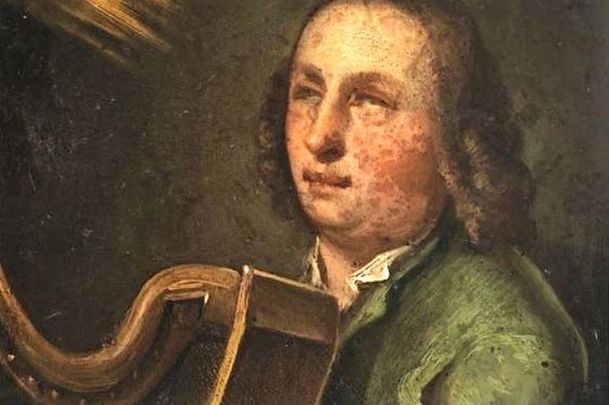 Turlough O'Carolan was an Irish harper, composer, and singer, who gained great fame due to his exceptional gift for composition.

He was born in Nobber, Co. Meath in 1670. When he was 14, his father was employed as a blacksmith by the MacDermott Roe family. The lady of the house, Mrs. MacDermot Roe, soon discovered young Turlough's talent in music and poetry and provided him his early education.

At the age of 18, his life took a tragic turn, when he lost his eyesight to smallpox. At this difficult time, Mrs. MacDermott Roe stood again by Turlough arranging for him an apprenticeship with a harper and continued to support him through the three years of his training.

As soon as he mastered his skills in the harp, he was provided with a horse, a guide, and funds and began his career as a traveling harper. For almost fifty years, O'Carolan journeyed from one end of Ireland to the other, composing and performing his tunes.

Very often, he was an honored guest in the homes of wealthy patrons, and in return, he composed tunes dedicated to the family or reflecting the occasion celebrated, such as a wedding or a funeral. In fact, his acknowledgment by the great Irish families was such that the celebrations were sometimes delayed until he could arrive to perform. Of course, he also composed tunes for common people, such as an air he dedicated to his young unfulfilled love Brigid Cruise.

During his lifetime, he became a father of six daughters and one son, with his wife Mary Maguire. He died in 1738 and was buried in the MacDermott Roe family crypt.

Today, O'Carolan is widely recognised as Ireland’s national composer, with stylistic influences ranging from the Irish folk melodic structure to the baroque techniques and forms. His influence by baroque music is certainly not a surprise, since they were contemporaries with Bach and fashions travelled from the continent to Ireland. Moreover, Francesco Geminiani, one of the most famous baroque musicians of his time, admired O'Carolan and declared that he was endued with il genio vero della musica.

Among the hundreds of compositions attributed to O'Carolan, a great number is designated as “planxties”, a term that seems to be an invention of his own to signify a tribute to his patrons.

Although most of O'Carolan's compositions were not published or even scripted during his lifetime, they survived in the repertoires of Irish music practitioners. In fact, many of his tunes are still being played today, as most traditional players, if not all of them, will include some O'Carolan’s music to a smaller or larger extent in their gigs or sessions.

Moreover, there have been dozens of recordings of his compositions by numerous artists, including some of the most important Irish musicians and bands, such as Seán O’Riada, Planxty, The Chieftains, and The Dubliners, something that contributed considerably to the spread of O'Carolan's music around the world.

The significance of Turlough O'Carolan in the Irish cultural history is so remarkable that monuments and statues of him playing his beloved harp have been erected, a few roads have been named after him, he is depicted on a £50 note, while several festivals and seminars commemorating his work are held annually. Even a meteorite crater on Mercury has been named in his honor. The National Museum of Ireland hosts a late 17th Century harp, stated to have belonged to Turlough O'Carolan.

Among the worldwide O'Carolan's fans, there is a band in Greece largely influenced by his unique work and superb music. Tir Fada is a group formed by Greek people with a deep love for Irish music, considering however their traditional Greek music background.

In an attempt to indicate some detected links between Celtic and Greek music, they have combined two of O'Carolan's famous planxties, “Planxty Burke” and “Planxty Drew,” with a wonderful traditional song from North Greece “Apano stin Triantafillia” (Upon the Rose Tree), creating a new music piece that could, however, have been composed this way ab initio.

You can check out the result of this fusion here: