Chicago's Patrick McFarland, one of the greatest fighters who never got a shot at a World Title

"Packie is one of the rare success stories of boxing in the early 20th century." 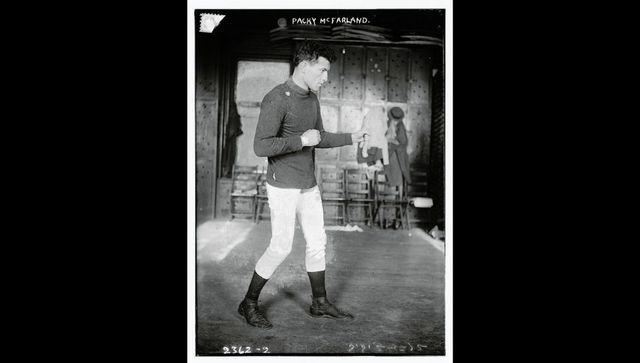 Born on Nov 1, 1888, to an Irish American family in Chicago, Illinois, Patrick McFarland was easily one of the greatest fighters to have ever boxed out of Chicago. However, he never fought for a World Title despite an 11-year victory streak that tallies up to over 106 wins, five draws, and no title shots. The statistics speak for themselves!

Patrick "Packie" McFarland turned professional at 16 years of age, in 1904, after developing a reputation for fighting in his own Irish American neighborhood, in Chicago. Packie knocked out 36 of his first 37 opponents.

At some stage, Oscar Matthews ( world-reigning lightweight champion between 1908 and 1910  sparred with McFarland. McFarland was just too good and completely upstaged Matthews. He was left chasing shadows and hitting air and called a halt to the sparring session early leaving the ring black and blue. They never faced each other again.

As well as being a brutal puncher, McFarland was an extremely crafty fighter, well able to outfox the most scientific boxers of his era. McFarland defeated a number of outstanding boxers such as Johnny Thomson, Freddie Welsh, Jimmy Britt, and Jack Britton.

Part of the reason McFarland never received a title shot was because of his tendency to shoot up weight divisions between lightweight to welterweight completely undaunted.

Packie is one of the rare success stories of boxing in the early 20th century. Whatever money he earned from boxing when he eventually retired in 1915, he invested very wisely in oil and real estate. He went on to become director of two banks.

In 1933, McFarland was appointed to the Illinois athletic commission by governor Henry Horner.

Packie McFarland died in 1936, described as the uncrowned lightweight champion and subsequently elected into the international boxing hall of fame. Packie was such a skillful elusive boxer, he didn't receive a black eye until eight years into his professional career such was his talent.

The fact that he never received a title shot is a testament to the caliber of boxer that he was.