Once distinctive, Christmas in Ireland is losing its special feel

This is no bah humbug piece rather an observation... Ireland has changed and in that something about Christmas and the holidays have become lackluster. 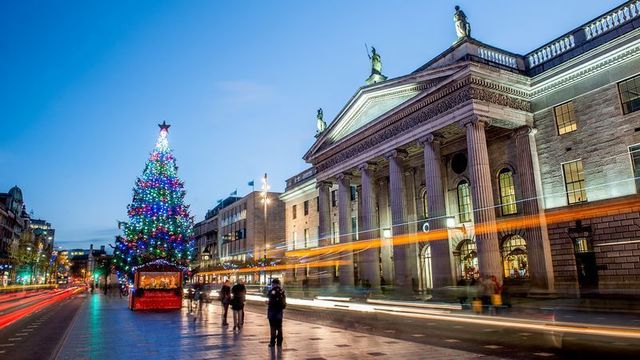 This is no bah humbug piece rather an observation... Ireland has changed and in that something about Christmas and the holidays have become lackluster.

DUBLIN – I’ve been living in Ireland for over two decades now, since July 1992 to be exact, when a 20-foot container landed outside my new home in Dublin with my meager store of worldly possessions inside.

During that time the country has undergone a series of radical transformations.

And that’s become a problem not just for tourists – many of whom expect to see the land their parents or grandparents left behind – but for some native Irish as well.

The trouble, as this latter group sees it, is that Ireland is losing its national identity under an onslaught of commercial and cultural influences trucked in from abroad. In particular, the worry is that folks here are morphing into clone-like duplicates of their US cousins.

Take my word: There’s a wide gulf yet between the two countries, in collective temperament, cultural values, and whatever you're having yourself. But I will concede that the Irish have embraced the American way when it comes to celebrating certain holidays.

The Fourth of July, for instance, gets a pretty good shout-out here, and Halloween has taken on American trappings, with house decorations, store-bought costumes, and trick-or-treating on an entrepreneurial level featuring prominently. As for the biggest day on the Irish calendar: Dublin's 2018 St. Patrick's Day Parade boasted nine marching bands from the US.

Read more: An Irish father's sense of loss at Christmas as he misses emigrant sons

But at no time of the year is the Americanization of Irish customs more evident than at Christmas. The consumer aspect has come to dominate the holiday here as well, with shoppers targeted well before the first autumn leaf has fallen.

To this end, impressive shopping malls and retail villages have supplanted Main Street businesses in recent years – despite the stifling effects of the post-Celtic Tiger recession a decade ago – and the Irish response has been no different from that of people elsewhere: Build them and we will come.

Perhaps I'm waxing nostalgic, but Christmas in Ireland used to be mainly a social holiday – more like Thanksgiving in the US, with the emphasis on food and companionship. Friends and relations would return home from abroad, and then set off again a week or two later, perhaps not to be seen for another few years.

This is something I experienced first-hand. Back in the winter of 1985, I departed Boston on Stephen's Day for an extended European backpacking sojourn, stopping off first to visit family and friends in Cork and Dublin. As soon as I touched down, the near absence of Yuletide glitz and buzz startled me. I particularly remember an undernourished Charlie Brown-type Christmas tree marking the season in the arrivals hall at Shannon.

Aside from the lackluster decorations (compared to the Vegas-style brashness I'd left behind in Boston), I was also bemused that Ireland appeared to simply shut down over Christmas. In those darker economic times, people fortunate enough to have a job were employed either in the civil service or by the banks. As a result, if you needed to inquire about your financial affairs, or arrange a passport or mail a package, you were just plain out of luck. Nothing was open for nearly a fortnight, allowing for many afternoons and evenings of easy sociability, in pubs and homes. (Fortunately, back in 1985, I had the stamina for such a regimen.)

Read more: Dublin named one of the best places in the world to spend Christmas

Today, that is all changed utterly. Many American companies are now based here, and while they indulge the laid-back Irish mentality to some extent, it’s back to business very soon after Christmas for them. And because business thrives on business, a lot of ancillary Irish retailers and service providers follow suit. (The gloss is off the big Stephen's Day sales, however, with Black Friday and Cyber Monday now recognized as shopping holidays here too.)

As well, low-cost air travel means Irish people abroad can come and go more frequently and at different times of the year, so a two-week nationwide work stoppage in late December is no longer necessary to welcome back these displaced sons and daughters.

As I survey the scene here in Dublin and around Boston on my visits home, I find reasons to be both hopeful and disheartened this holiday season. On both sides of the water, I see people who have developed businesses or started up community projects in the small openings that still appear in the broader global economy. Personal initiative and sacrifice, it seems, haven’t quite gone out of fashion.

But I also see people – Bostonians and Dubliners alike, as both places are experiencing similar booms – whose lives are distinguished by an unflattering superficiality that a consumer-driven Christmas period only accentuates.

This wasn’t intended, however, as a bah-humbug piece, with the Grinch as my muse. At this time of year, communities and individuals invariably find ways to express a general goodwill, through charitable donations and philanthropic deeds.

And I’d like that to be my ultimate message today.