When Okie from Muskogee came to Manhattan 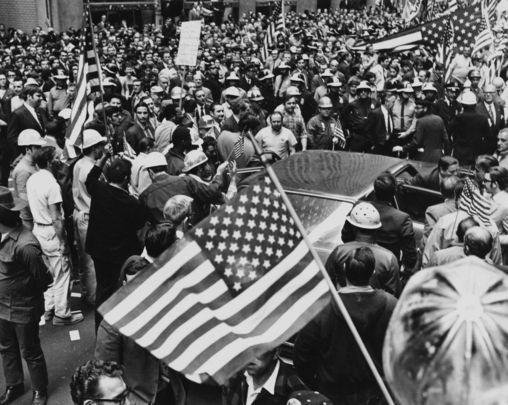 This month, Ken Burns’ latest epic documentary, Country Music, unspooled on PBS stations across America and online, where full episodes are available.  By the time Burns explores the late 1960s, one of the key players in the country music scene was singer Merle Haggard.

It would have been really interesting if Burns also spent some time with Peter J. Brennan -- who was as “un-country” as anyone could be.

Brennan was an Irish kid from Hell’s Kitchen with a prominent Noo Yawk accent. But by the late 1960s, Brennan’s life converged with Haggard’s in a fascinating way.

Not much attention is likely to be paid next month, when perhaps only a few Oklahomans will mark the 50th anniversary of the release of Haggard’s biggest hit, “Okie from Muskogee.”

The song would become the subject of heated debate at the White House, in part because it “tapped, perhaps for the first time in popular music, a vast reservoir of resentment among Americans,” as a 1970 Reuters report put it.

In his recent book Songs of America, Pulitzer-prize-winning historian Jon Meachem dubs Haggard's song a “kind of anthem for middle America.” With lyrics about moonshine and “pitchin’ woo,” this characterization is hard to dispute.

For decades, folks in “middle America” looked upon cities, with their immigrants and gangsters, flowing booze and political corruption, with a mix of fear and revulsion.

By 1970, however, city guys like Peter Brennan and country boys like Haggard had found a common enemy -- hippies and the anti-war movement. By then, hundreds of thousands of laborers on New York’s crowded streets worked for unions run by Brennan.

The biggest construction project? At the southern tip of Manhattan, the Twin Towers of the World Trade Center.

Every day, as Irish and Italian ironworkers and elevator technicians toiled in the air, a different scene unfolded down on Manhattan’s streets.  In late April of 1970, newspapers were reporting that U.S. troops were invading Cambodia in an effort to disrupt North Vietnamese supply lines.

Then, on May 4?  Four students shot dead at Kent State by National Guardsmen.
New York Mayor John Lindsay even ordered the American flag at City Hall to be flown at half-mast, to honor the slain students.

Early in the morning on May 8, anti-war activists began gathering at Wall and Broad streets.  By noon, the streets were packed with protesters and office workers enjoying a sunny lunch hour.

Then came the construction workers.  From the Trade Center. From all directions, it seemed.

They waved flags and wore hard hats adorned with red, white and blue stickers.  They punched protesters (dozens of injuries were reported), and draped a statue of George Washington with an American flag.  They demanded that the flag at City Hall be fully raised.

What came to be called the “hard hat riots” were followed by two massive rallies later that month organized by Brennan, who later said the workers “were fed up with violence by antiwar demonstrators, by those who spat at the American flag and desecrated it.”

This sounds an awful lot like something a certain country singer said about hippies and protesters in Rolling Stone magazine that same year.

“I thought they were unqualified to judge America, and I thought about them lookin’ down their noses at something that I cherished very much, and it pissed me off,” said Haggard.

It’s no accident both Haggard and Brennan would soon be welcome with open arms at the Richard Nixon White House -- Brennan as secretary of Labor, Haggard to perform his song.

As 21st-century country music star Tim McGraw noted in Songs of America, “Okie” was very much an anthem for America’s Nixonian “silent majority.”

Our current president has earned lusty praise using that phrase.  Fifty years on, most people would agree you could use many words to describe these folks.  But “silent” would no longer be one of them.

Read more: An Irish Mammy, the luck of the Irish, and the Beatles