Loughcrew Cairns is one of Ancient Ireland's best-kept secrets

IrishCentral contributor Susan Isabella Sheehan looks back on a trip to Loughcrew Cairns in County Meath. 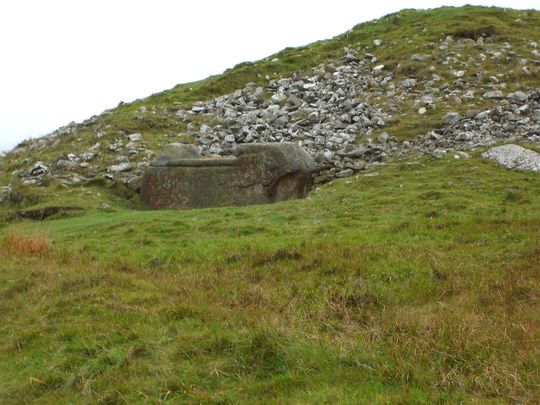 The Loughcrew Cairns are megalithic structures similar to others scattered throughout the Boyne Valley and other areas of Ireland. They contain symbolic engravings, and like other cairns in Ireland, they have clear astrological significance.

The site has evidently had many uses during the ages, and it is thought that they were originally built about 4000 B.C.E. as burial chambers. Many of the structures were unfortunately damaged at the beginning of the 20th century by an amateur archeologist, mentioned below, and many of the artifacts were removed. These chambers at Loughcrew are some of the best-kept secrets in Ancient archaeological Ireland.

We drove down a narrow lane, past farmhouses, and barking dogs. We passed a field where the most magnificent shaggy-haired, long-horned Highland bull we had ever seen was standing by a fence, gazing out upon the road, his harem of cows grazing peacefully in the field behind.

Just around a corner, and there in front of us was the car park. And guess what? No other cars to be seen. We would be visiting Loughcrew by ourselves!

My husband parked the car, and we got out. We made sure to wear our coats as the air was really quite chilly.  We read the interpretive signs and then walked through the gate to the steps which led to the bottom of the hill. The steps were very deep set and covered in crushed rock to prevent slipping. It was a long way to the top of the steps, and I had to stop several times, working to fight off my fear of heights. At approximately 900 feet, this hill is the highest point in Co Meath, but we were determined to walk it.

We got to the top of the steps and looked at the hill ahead of us. There were no real signs, only short brown posts with arrows on them, indicating that we were on the right path. And what a path! This is where the sheep who fed on the grass of these hills walked, having left behind many well-worn uneven ruts in the earth, causing me to walk in an erratic sort of way. And boy, was it ever slippery, at least for me. Tom was fortunate to be wearing shoes with deep tread. My boots, although they had tread, did not grab the ground very well. Tom held onto my hand and I pressed on. I was determined to climb this steep hill or die trying, and when it was over, I felt as if I truly would.

I tried not to look down, but could not help it. The valley below us appeared to be very, very far away. I began to get dizzy and told Tom that I couldn't take another step for fear that I would fall. Fortunately, there happened that the only bench on this side of the hill was close by. Tom helped me up a slope, and I straddled the bench between my legs as if it were a horse. I couldn't go any further.

Tom decided to hike up the hill just a bit more. I watched him until he was out of my sight. While he was gone, I let my attention fall upon the breathtaking views. I could see for miles and miles. The foggy mist of the morning was beginning to clear, and what I saw before me was, simply put, glorious.

I took in huge breaths of the air, pure and clean, and thought about the people who had lived before us, the ancient ones who had constructed the passage tombs and dolmens, those who had given us the path of light which we now walk.

It seemed like hours before I saw Tom again. I heard his voice before I saw him. He came from a different direction than the one he had gone in. And, he had made it to the top!

He had taken many wonderful photos of the passage tomb and surrounding rock formations. He had gotten lost for a while, not remembering which direction he had come from. I swore then that when we returned, I would climb to the top, and overcome my fear of heights! I want to see them, to be able to touch them. We stayed a little longer, simply enjoying the beauty which surrounded us. We didn't have anyplace else planned for this day, so we were able to just take the time to absorb the specialness of the moment.

We walked carefully back down the slippery, uneven sheep trail, Tom holding my hand much of the time. I had a difficult time not looking down into the valley. I had to focus on the ground beneath my feet. We came to the steps and made our way down.

There was another car parking in the car park. Two Irishmen got out of the car and greeted us. Tom asked for directions back to Kells, and the driver of the car pulled a foot-high stack of maps out of the glove box. While Tom was busy with directions, I asked the other man if it was true that Loughcrew was the oldest burial site in the world, predating the Pyramids by at minimum two thousand years. He looked at me for a few moments, then said, with a very deep Irish accent, 'I believe you. You have an honest face.’ His eyes were sparkling as he spoke, and he had a bit of a sheepish grin on his face. I laughed. I had asked a question, not made a statement. It was a very delightful moment for me.

The men told us that the road we were going to take was extremely steep and that we should be careful as we drove down it. Tom assured them both that he was familiar with steep roads, and that we would be just fine. They said that they were going to hike to another impressive site which was on Carnbane West, Cairn D, which has a circumference of 163 meters. This happens to be the largest cairn in the entire Loughcrew complex. Unfortunately, it suffered significant damage at the hands of Eugene Conwell who, along with about a dozen men that he had hired, removed the cairn stones trying to find a passage into the main chamber. He gave up after two weeks, with no discovery, sometime during the summer of 1868. But the damage was done and he left Cairn D with a huge depression on the top. A terrible mistake by someone who didn't have a clue as to what he was doing.

My husband passed in 2019, and I inherited all of the photos from all of our adventures.