Loss of loved ones echoes through the decades on Veterans Day

The grief and joy of being reunited one day – a cousin’s tragic death in the Vietnam War. 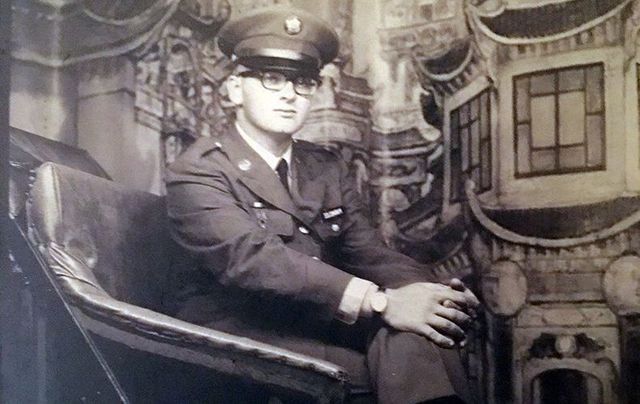 The grief and joy of being reunited one day – a cousin’s tragic death in the Vietnam War.

My Aunt Catherine had beautiful red hair and she was proud of her Irish roots. She became the matriarch and record keeper of her family at a young age after both of her parents died in New York one year apart in 1933. Catherine and her four siblings were separated after that and they would never live together again.

Having a family was important to Catherine and she was determined to keep her siblings updated on each other's whereabouts. As teens, Catherine and her sister, Mary, became live in help to wealthy families in Connecticut. They were called domestics back then.

Catherine faithfully took the train from Connecticut once a month to Manhattan to the orphanage where my young father lived to take him out for an ice cream. She wanted him to know he was loved and he had a family.

Catherine met Walter in Connecticut in the late 1940s. After they married she stayed in Connecticut with their new baby, Jeffrey, while her husband searched for work in Manhattan. Because of his limited education, he felt lucky to land a job as the building maintenance man at 1104 Lexington Avenue, in Manhattan. A perk of the new job was an apartment on the sixth floor of the building Walter would be maintaining and best of all - it was rent-free. Catherine and Jeffrey later joined Walter in New York and she embraced the city life. She never learned to drive so she loved the freedom Manhattan afforded her and living there was the perfect fit.

Jeffrey was a beautiful baby with blonde hair and big blue eyes. His parents adored him. They wanted to give him all of the things they did not have while growing up. Jeffrey attended a parochial school in Manhattan and when he became a Boy Scout his mother was his Boy Scout Den Mother. He then became an altar boy at St. Jean Baptiste Roman Catholic Church, on the corner of 76th street and Lexington Avenue.

After a rocky start in life, Catherine was content with her husband and their only child.

My father had two daughters and he took a special interest in his nephew Jeff. As a teen when Jeff told my father he didn't know what he wanted to do with his future, my father encouraged Jeffrey to join the army. My Dad told him he would see the world and gain valuable experience which would be useful later in his life. We were all proud of Jeff when he enlisted in the Army for two years in 1969. After duty in Colorado and Germany, he was shipped to Vietnam in August 1970. He spent his 20th birthday there. 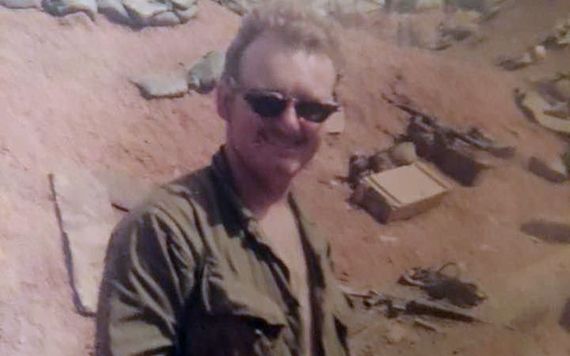 I was only ten years old at the time, but my father encouraged me to write letters to him and Jeff and I became brief pen pals. My father took me to an America Legion location in Manhattan and my sister and I assisted in painting welcome home signs for Jeffrey who was due home after his two-year hitch ended on May 28th. My aunt was so excited knowing her son would be coming back home in just a few weeks. She could not wait to see him again.

Thousands of miles away in South Vietnam along the Demilitarized Zone (DMZ), Dorsey Winfree, age 67, from Quincy, Washington, and his buddy who he called Parmelle decided to grab some chow before what they knew would be a tough day. Their assignment was to secure a hill near a rock pile close to the DMZ. While they were eating, Dorsey remembers Jeff turning to him, "I have a feeling this is our Last Supper." They later were traveling with four other soldiers in their Armored Personnel Carrier (APC) as the lead track when they picked up an additional six soldiers from the 101st Airborne Division as a support to secure the hill. They were ambushed, and their APC was hit by a Rocket Propelled Grenade. Dorsey was wounded and later airlifted to a hospital along with five other wounded soldiers. The other six soldiers did not make it. Jeff who was manning the radio was killed instantly.

Dorsey remembers his friend Parmelle, as a fun guy-a good guy and the memories of that day still haunt. He said he still thinks about it every day of his life and he imagines he always will.

The reunion with Jeffrey was not the reunion Catherine was hoping for.

My uncle described how on a sunny Monday morning he walked over to open the large windows in his living room which faced Lexington Avenue and that is when he first noticed the dark car pull up and park on the street in front of his building. He watched the car thinking it looked out of place and something about it made him feel uncomfortable. He had a bad feeling about it being parked there. When the car door opened two men dressed in Class A army uniforms got out of the car followed by a chaplain. He instantly knew what was about to happen. My uncle said he looked over his shoulder and saw Catherine sitting so comfortably in her recliner drinking a cup of tea and reading the morning papers. She looked up and smiled at him. He looked back at the men and silently begged God they would not turn to enter his apartment building. His heart sank as he watched them turn into the lobby. He looked back toward Catherine knowing that in moments her life would change forever. He desperately pleaded with God that his doorbell would not ring.

When it did ring Catherine looked up from her newspaper and asked, "I wonder who that can be so early in the morning?"

They were told their only child, Spec. 4 Jeffrey M. Parmelee was killed in combat days earlier on March 25, 1971. He had died on his father's birthday. 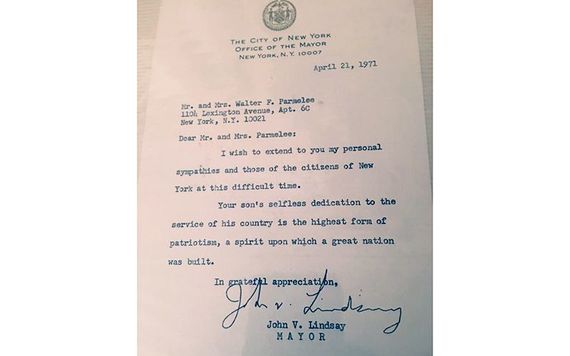 A letter to the family, following Jeff's death, from the New York Mayor.

A few days later I remember standing on the steps outside St. Jean's Church, the same church where Jeff served as an altar boy, with other family members as I watched the soldiers in their crisp uniforms remove his flag-draped casket from the hearse. It frightened me to see my father sobbing so uncontrollably. It was painful watching my aunt Catherine being held up by her husband and her best friend as she walked down the aisle in church behind Jeff's coffin. The night before at the viewing she had thrown herself onto Jeff's closed coffin and wailed. It was heart-wrenching to see. 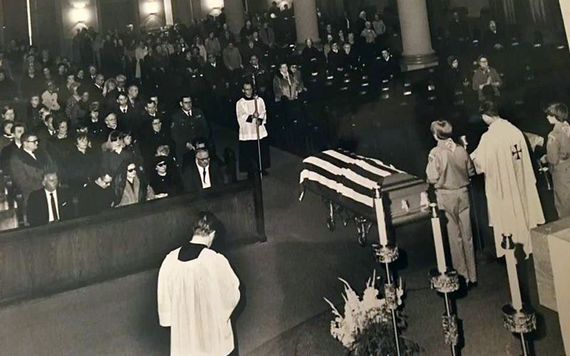 "Professional photographs of Jeff's funeral taken by a photojournalist for a New York newspaper."

Later that afternoon at the gravesite service Jeff was given a 21-gun salute and the only sound I heard while the lone bugle player played Taps was Catherine's muffled cries. The ceremony was steeped in tradition and Catherine was presented with the flag which covered her son's coffin on behalf of a grateful nation.

A letter would later arrive from then-president Richard Nixon offering his condolences. My Republican father sent a letter back urging him to withdraw our troops from Vietnam and bring our remaining servicemen home.

Recently while going through my aunt's photo albums I found remnants of Jeffrey's short but happy life. His social security card and his driver's license and so many pictures. She saved everything. I found professional photographs of Jeff's funeral taken by a photojournalist for a New York newspaper. There is an aerial view picture of inside the church during Jeff's funeral. Behind Catherine were her sister and three brothers. 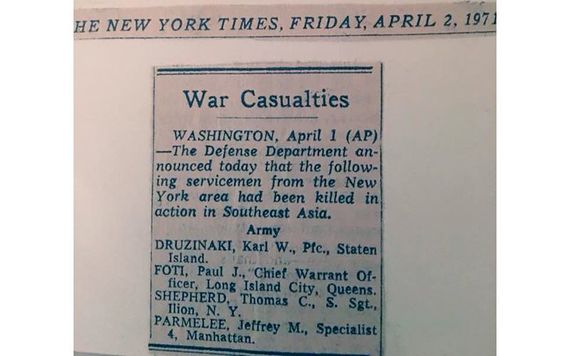 A newspaper clipping announcing the young men's deaths in Vietnam.

It was the only time all five of Catherine’s orphaned siblings were ever together.

Decades would pass as Catherine and her husband did the best they could to move on with their lives. They maintained a wall in their home filled with pictures of Jeff and the flag which covered his coffin was always on display. She talked about him every day of her life. Catherine loved to hold and rock babies to sleep yet she would never become a grandmother. Because she would never see her son marry she now found it difficult to attend weddings.

Catherine and Walter were married more than sixty years at the time of her sudden death in 2009. She was 87 years old when she died in North Carolina. All of her siblings were gone by then and I drove from New Jersey to North Carolina to be with my uncle. I expected there would be just the two of us at her service. To my surprise when we arrived at the church the parking lot was full. The church was also full as I escorted my uncle down the aisle as he carried Catherine's ashes.

I was a little put off by the young priest conducting the service because he seemed so incredibly joyful. I thought it was strange behavior for someone who was about to give a eulogy. He was smiling from ear to ear. He could not contain his glee. But as he spoke it began to warm my heart because he had clearly known my aunt very well. It was oblivious they had many conversations over the years and he later told me they were mostly about Jeffrey. In fact, all of her friends in church that day from her retirement community had known about Jeffrey.

As the priest reached the end of his eulogy he smiled even wider as he stretched out his arms and looked up toward heaven, "Imagine how happy she was to see her boy again. Imagine her face when she saw that boy. She finally had her reunion. What a reunion it was. What a reunion they are having now."

I hadn't thought of it that way. But as I sat there in the church I found myself smiling too and thinking about my aunt finally being reunited with her son after 38 years.

Everyone in the church was smiling that afternoon.