Irish writer Colm Toibin, author of “Brooklyn” and “The Master”, has revealed his recent struggle with testicular cancer which had spread to his liver. 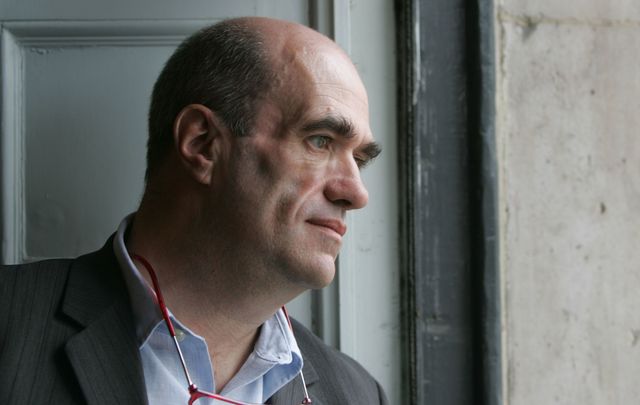 Irish writer Colm Toibin, author of “Brooklyn” and “The Master”, has revealed his recent struggle with testicular cancer which had spread to his liver

Writing a lengthy 8,500 words in the London Review of Books Toibin paints a gripping and emotional battle with cancer alleviated by humor and good friendship.

“It all started with my balls. I was in Southern California and my right ball was slightly sore. At the beginning I thought the pain might be caused by the heavy keys in the right hand pocket of my trousers banging against my testicle as I walked along the street. So I moved the keys into my jacket pocket. The pain stayed for a while and then it went away and then it came back. I was doing readings every day, selling my melancholy stories to the people of Orange County and places south. I wondered, some days, if there might be a doctor in the audience who, if I made a suitable announcement at the end of the reading, could make this pain in my right testicle go away.

“The bad news was that the pain in my right ball grew more annoying. I managed to make an appointment with a urologist in Dublin and flew home one morning in late June. As soon as he examined me, the Dublin urologist seemed concerned, though he said nothing. He arranged some blood tests and an ultrasound, telling me that, unlike with kidneys and livers, a biopsy on a ball is rarely a great idea.

The ultrasound was done by two young guys filled with kindness and sympathy. ``I know this is shaming for you,’ one of them said. I sat up, rested on my elbows, and looked at him. ‘When you get to my age,’ I told him, ‘nothing is shaming.’

When I came for the next appointment, the urologist asked me if I was fasting. I hadn’t bothered to have breakfast so I told him truthfully and innocently that I was. ‘In that case,’ he said, ‘I can fit you in today.’

I knew what he meant; he meant to remove my ball. I went home and packed a small suitcase and presented myself at the hospital. As the afternoon waned, dressed in a gown with no back, I was wheeled down the corridors. Soon, with the help of the anesthetist, I was fast asleep. This was just as well, since during the time that followed, the urologist, with efficiency and speed and skill, removed my right testicle.

A week later the phone rang and I was told that I had a cancer of the testicles that had spread to a lymph node and to one lung. Instead of seeing the urologist, I would now need to see an oncologist. For a few days I comforted myself by pretending that, because of my abiding interest in the mysteries and niceties of Being, I had To get rid of this cancer, the oncologist told me, I would need chemotherapy. ‘It’s curable,’ he said, his voice low and reassuring, his tone modest and reserved. ‘We have not lost anyone to it yet.’

For the rest of the article go to www.lrb.co.uk.