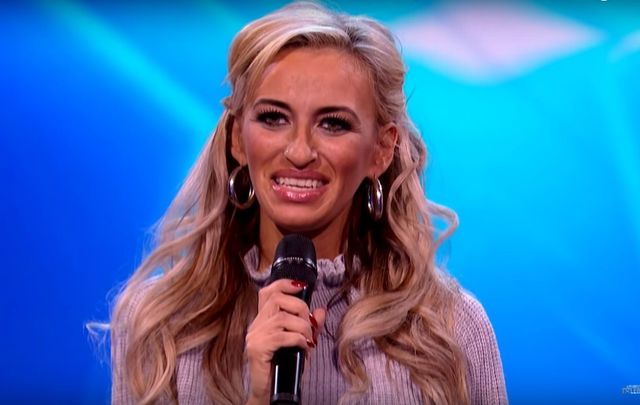 The reality TV program ‘Ireland's Got Talent’ 2019, revealed many talents, including the winners ‘BSD’ a terrific dance troupe. However, the talent that took my and many other’s breaths away was 34-year-old, Sharyn Ward, “a very proud Irish Traveller”.

Sharyn was discovered by TV presenter Lucy Kennedy while she was visiting a Traveller’s campsite for another TV reality show. While relaxing after dinner, around the campfire, a beautiful young Traveller started to sing and Lucy’s shivers and goosebumps confirmed she had inadvertently found a contestant, and in her mind, a winner, for ‘Ireland's Got Talent’, another show produced by her boss.

Sharyn had to be convinced to join the competition and step into the spotlight as she knew her origins could provoke prejudice. At the first round, she sang Ben E. Rings song ‘Stand by me’ and the judges were wooed by her strong, crystal clear voice.

However, after she spoke about herself, judge Louis Walsh asked if she ever sang Irish traditional songs. She subsequently gave a non-accompanied rendition of Finbar Furey’s ‘Sweet Sixteen’ that blew him and the three other judges (Michelle Visage, Jason Byrne, and Denise Van Outen) away. Louis Walsh’s instinct had been correct; Sharyn’s voice was absolutely perfect for Irish Trad.

Although the judges and many of the public were absolutely enchanted, as Sharyn had anticipated, her performance as well as inciting accolades also provoked vicious and vile comments on social media. Some of the comments poked fun of her ultra-glamorous look; others went farther, referring to members of the Travelling community as “beasts” that needed to be “exterminated”.

As someone who intensely dislikes conflict, Sharyn deliberately avoided replying to the insults to prevent a social media controversy. She kept the hurtful remarks to herself for days as she wrestled alone with the difficult decision of whether to drop out or continue. Intensely religious, she let herself be guided by her faith, which seemed to be telling her to forge ahead. She felt the situation wasn’t only hurtful for her, but for all Travellers, and she needed to go on, if not for herself, for her fellow Travellers and posterity.

Her dignified handling of the situation led me, and I’m sure many others, to reflect on the Travellers.

I wondered why they had gone from being a respected, albeit separate, ethnic group to a people who solicited racism and hatred. An Irish Traveller crime gang who had committed not only petty but heinous crimes, over the past few decades seem to have blackened all Travellers’ names.

Over the same period, organized crime gangs, with no Traveller links, escalated in Dublin and other areas of Ireland. Discriminating against a whole ethnic group, or area, because of the actions of a minority doesn’t make sense. No one would blacklist the entire population of Crumlin, in South East Dublin, because Liam Byrne and other members of his organized crime gang, which has links with the notorious, international ‘Kinahan Cartel’, live there.

In the 2016 census, it was estimated that there were approximately 30,987 Travellers in the Republic and 3,905 in Northern Ireland. (The US is home to 10,000–40,000 Irish Travellers, many of whose ancestors left Ireland during the Great Famine, with a community of approximately 1,500 residing in ‘Murphy Village’, South Carolina). Because Travellers are a minority group within Ireland and the United Kingdom, they have often faced discrimination on the basis of their ethnicity.

In the UK Irish Travellers are a very small ethnic group. There is a far greater likelihood of them being given custodial sentences due to the lack of a permanent home address and the expectation that they might abscond. In Feltham prison for young male offenders outside London (Feltham “A” building houses young boys between the ages of 15 and 18, and Feltham “B” houses young men aged 18 to 21) the number of Irish Travellers incarcerated at times has reached ‘a staggering 38%’[1] of the prison’s ‘white population’.

Often first-time Traveller offenders are in for petty-crime, the same crimes for which a person with a fixed abode would be released on bail. A volunteer worker from Feltham prison told me it broke his heart to see the young Irish Travellers, who often suffered the racism, of not only other inmates but of some prison officers.

Their inability to exist in a cell, due to their love of the open space and life on the road, along with being separated from their families, and problems linked with illiteracy, often led to them being more negatively affected by their ‘time’ than other inmates. Feltham is not a tender place, 13 prison guards were hospitalized after a teenage inmates’ riot at the beginning of April. There have also been recent cases of inmates being murdered by their cellmates because of race or sexual orientation.

After ruminating on many questions, Sharyn decided to return to IHT’s stage, with her head held high for the sake of younger Travellers and her own children, to show them that if she could do what she wanted in life, they should have the confidence to follow suit.

In the semi-finals, her rendition of ‘Black is the Color’ was spectacular and confirmed her place as a finalist.

In recent years a study of Irish Travellers ancestry predates the time of their social divergence to far before the Great Famine, back to the early 1600s when during Cromwellian times people were displaced during the plantations. However, looking at this fabulous woman sing, we might remember other stories of how the Travellers were descendants of the Fir Blog and Tuatha Dé Danann, the tribe of the Gods of pre-Christian Gaelic Ireland.

As Sharyn’s voice soared her accent was distinctive. Many Travellers still speak their own dialect ‘Shelta’ also known as ‘the Cant’. Celtic language expert Kuno Meyer maintains that ‘Shelta’ existed as far back as the 13th century. It was the language of the ancient Bards of Ireland.

At the finals on 7 April, Sharyn brought tears to the driest eyes when she sang ‘One Starry night’ a love song which Liam Weldon, folk singer and songwriter borrowed from the Traveller community in the early 1960s.

The lyrics for ‘One Starry night’ are as follows:

I'll search the highways likewise the byways I'll search the boreens, the camping places too I will inquire of all our people Have they tide or tidings or sight of you

I'll go across the seas to England To London or to Birmingham And in some public house, I'll find you Lamenting your lost love back home

I'm drunk today, I'm seldom sober A handsome rover from town to town When I am dead, my story ended Molly Bán a stoirín, come lay me down

Although she was the ‘judges’ choice’, Sharyn didn’t win the finals. She came fifth out of eight finalists. However, she did win many hearts and led many people to reflect on the Travellers and perhaps to remember back to when they were welcome callers at peoples’ homes.

I remember lady Travellers coming to our house to sell clothes’ pegs, lace, and other handicrafts along with the enamel white and blue mugs their men folk made and which we’d always bring on picnics. I also remembered the secret and sound advice a Traveller lady gave me as she looked into my very soul.

I remembered their place in many of our poets and playwrights’ works; J. M. Synge, Thomas MacDonagh and J. B. Keane to name a few.

Nowadays the gulf between settlers and Travellers seems more pronounced. In Rathkeale, Co Limerick, where approximately 1,500 Travellers live (two-thirds of the town’s population) the settled and the Traveller population are challenged by the logistics of cohabiting.

Sharyn has made us remember it wasn’t always this way, as she bravely reached out. TheJournal.ie reported how she called on parents to teach their children to be open and accepting of the Traveller community saying:

“The main thing people need to do is just teach your children. If you teach the next generation to stop listening to the ones before. Don’t listen to what you’ve grown up to hear… ‘to stay away from Travellers, Travellers are bad’. Don’t listen to it. Start fresh with your own children. Tell them if you don’t know a Traveller, personally – meet one. They’re not bad people.”

Prof Gianpiero Cavalleri of the Royal College of Surgeons reminds us that “the Irish Traveller population has Irish ancestry, (unlike the Roma gypsies) and that although Irish Travellers show clear features of a genetic isolate; they are genetically very close to settled people in Ireland. Whether because they are descendants of the Tuatha Dé Danann, the Fir Blog, the Irish Bards, or were Irish settled people displaced by Cromwell, the majority of Travellers are riddled with culture, Irish traditions and customs, kindness and spirituality and are “freeborn men (and women) of a Travelling people.

Many revolutionary ideas start with women and Sharyn herself broke many of the Travellers’ codes by going to college and working. She is an ambassadress for her people and may revolutionize how they are perceived. It’s good to think about all our people, whether we’re settled, Travellers, or from the diaspora scattered to the four corners of the world. Whatever way you look at it, the truth is we’re all Irish and proud!

[1] Katharine Quarmby, ‘No Place to Call Home: Inside the Real Lives of Gypsies and Travellers’, p. 172