The Irish response to Cultural Colonialism

"British Colonialism was the knowledge producer of Irishphobia since it depicted the Irish as a funny character particularly linked to violence and alcohol." 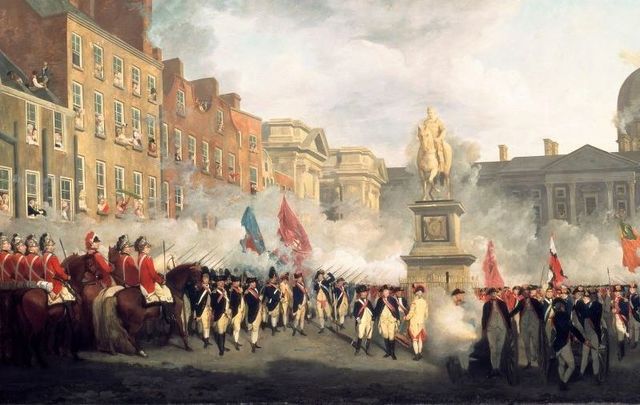 A look at the colonial strategies used by the British on Irish soil.

Over the centuries, Ireland was a country structured on rebellions and conflicts between the Irishmen who sought to liberate their land from the British crown and an empire that aspired to tighten its grip in multiple areas in each continent. It is then nearly impossible to talk about the Irish response to Cultural Colonialism without examining the Colonial strategies used by Britain on Irish soil.

One of the most dangerous methods of colonialism used in Ireland is Cultural Colonialism, or Cultural Imperialism. It is a form of colonialism that saw the light in the last 18th century and the early 19th century. France was the pioneer in this field during Napoleon Bonaparte’s campaign on Egypt, “when Napoleon invaded Egypt in 1798, he took 165 scholars with him. Among other things, they founded an entirely new discipline, Egyptology, and made important contributions to the study of religion, linguistics, and botany.” (Harari, 2011, P .201).

From that moment, Britain carried the torch from France and became dominant in the implementation of Cultural Colonialism by spreading the English language and the British culture in its colonies. There are different forms and types of Cultural Colonialism and the most popular one is the formation of intelligent agents through Intelligence Studies. These intelligent agents would master the use of foreign languages by pursuing in-depth studies concerning colonized cultures.

For example, we can name the English agent Thomas Edward Lawrence, better known as Lawrence of Arabia, who worked for the British intelligence as well as for the British army. He was specialized in Archaeology and was known for his mastery of the Arabic language and a decent number of Arabic dialects. During the First World War, he infiltrated the Arab tribes in the Hejaz area and succeeded to unite their lines to join the war and launch attacks on the Ottoman Empire. Lawrence of Arabia convinced Arab chieftains such as Al-Sharif Hussein that Britain would offer its help in establishing a United States of Arabs once they win the war.

The second strategy could be manifested in the publications of academic studies and writings which are overwhelmed with a racial tendency, ethnocentrism, or the ideology of the White Man’s burden. Accordingly, Cultural Colonialism works on demeaning the identity and the beliefs of the colonized nations. These studies aimed at debasing the cultures of the colonized while idealizing the British one.

In his book Sapiens: A Brief History of Humankind Yuval Noah Harari (2011) stated that "the existence of different human races, the superiority of the white race, and the need to protect and cultivate their superior race were widely held beliefs among most Western elites.” (P.166).  He added, “Scholars in the most prestigious Western universities, using the orthodox scientific methods of the day, published studies that allegedly proved that members of the white race were more intelligent, more ethical and more skilled than Africans or Indians." (P.166).

In a similar way, several scientists vowed to undermine the Irish race by using the scientific method, “Darwin himself was no friend of what he called “the low Irish”. He quoted with approval, in The Descent of Man, WR Greg’s fears about how the “careless, squalid, unaspiring Irishman multiplies like rabbits” His supporter Charles Kingsley compared the Irish to chimpanzees.” (The Irish Times, 2009).

These are clear statements of the abasement of Irishmen by Scientifics who could be depicted as intellectuals committed to serving the imperial struggle. Social Darwinism allowed ‘the civilized’ to intervene in the affairs of ‘the uncivilized’ to improve his situation.

According to Antonio Gramsci, these arguments could be portrayed as “Cultural Hegemony." It is a key concept which implicates power and politics in cultural texts. Intellectuals such as Darwin support the dominant power through their writings which serve as propaganda tools in the favor of Imperialism.

In contradiction to Darwin, the organic intellectual, according to the Gramscian approach, is the one who helps the oppressed within or outside his own society without thinking of himself as somebody who belongs to a different class, independent of any sort of egocentrism and ready to sacrifice his own life for the betterment of societies by pursuing freedom and dignity. Several organic intellectuals, who embraced the Irish cause, emerged during the nineteenth century inside and outside of Ireland.

Irish Struggle in the face of British Colonialism

The Irish were committed to liberating their country from the oppression they had been enduring for centuries. Therefore, different dissenters and rebels appeared throughout the history of Ireland.

One example of an organic intellectual is Robert Emmett. He was a young idealistic patriot who led a rebellion in 1803 against British rule but he was unsuccessful. Once sentenced, Emmett gave a speech from the dock with which he inspired the future generations to keep fighting for their freedom until their nation “take its place among the nations of the earth”. His booming Irish speech ushered in a new spirit in Ireland that paved the way for future rebellions and future revolutions. As a result, Emmett became an inspiration for Irish nationalists and was seen as a pugnacious, charismatic hectoring martyr shown in his full glory and grandeur.

British Colonialism compelled Irishmen from all around the world to brandish their swords and their spear in the face of oppression and injustice. British Colonialism was the knowledge producer of Irishphobia since it depicted the Irish as a funny character particularly linked to violence and alcohol. This narrative of the barbarian Irishmen dehumanizes all Irish as it portrays them exclusively by their violence and introduces them solely by their barbarism.

However, this narrative was somehow positive for the Irish people as it provided fertile grounds for the rise of Irish Nationalism which became a thorn in the British side.

Harzallah, Mohamed Saleh. 2009. The English Hegemonic Order and the Irish Nationalism in the Nineteenth Century