"I could also envisage the garden of white lace formed by Mannin Bay’s coral, a reminder that the ocean is and always will be there, another legacy of sorts." 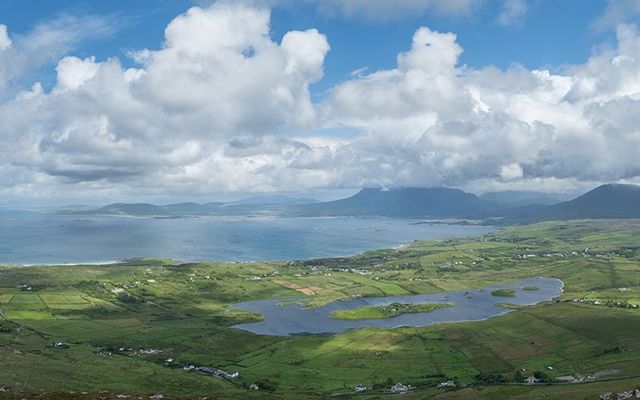 Before our writer in Paris relegates her lockdown Zoom existence to the stuff of memory she recalls a touching community discussion, the loss of Eavan Boland, Ballyconneelly, Connemara, and a ghost story.

For me personally, the lockdown Zoom-mania was a moderate one, and working from home remained in the realm of good old fashioned telephone calls, WhatsApp for overseas vocal calls, and e-mails.

Yes, I admit I was one of the tracksuit clad, unseen and oblivious to onscreen judgment for the best part of lockdown. However, I did have a flurry of zooming for fun and stimulation which consisted of a handful of yoga and “mindfulness zooms” along with a series of 11 weekly Sunday zooms, instigated by Dr. Desmond McGetrick, Chairperson of the Cercle Littéraire Irlandais (CLI) which commenced on Easter Sunday, April 12 and continued until June 21 when we brought the zoom curtain down through a blast of music and conversation with “the mighty Paddy Sherlock.”

As I now find my way back to the office, and reacquaint myself with Parisian streets, meet up with colleagues and friends and sip delicious creamy café crèmes or kirs on Paris’s beloved terraces, and join the other masked army of voyagers and shoppers in the metro, shops, and bakeries, life is getting back to some sort of “deconfined” normalcy. It seems it’s time to tidy away my zoom headphones and my large illustrated French Larousse dictionary on which I plonked my home computer in an attempt to find a more camera-friendly angle to improve my zoom look, which after my first ever lockdown zoom had left me feeling despondent.

As I tidy away the tools of zoom and doom lockdown days, I think about all the amazing people I met over the course of the CCI zooms, which during the same period (April 12 to June 21), outside of lockdown, even if it had been a hectically social time, I never could have met so many incredible people, nor had access to such a concentration of kindred spirits. I’m reflecting on the varied themes of each of the 11 zooms as I also mentally tidy them away in my personal lockdown history. However, there is one zoom and memory that jars, that juts out, categorically refusing to be relegated to the drawer earmarked ‘stimulation and happiness’ in my lockdown memories.

That particular Zoom was a tribute to Irish poet Eavan Frances Boland, (1944 – 27 April 2020) who passed during the lockdown. The event was opened by Her Excellency, Patricia O'Brien, Ambassador of Ireland to France.

O'Brien reminded us how Her Excellency Mary Robinson in her inaugural speech as President of Ireland, in Dublin Castle in 1990, stated: “As a woman, I want women who have felt themselves outside history to be written back into history, in the words of Eavan Boland, finding a voice where they found a vision.”

Robinson was born the same year as Boland and like her is a champion of women, women’s rights, and human rights in general.

During the zoom, Dr. Nessa O'Mahony shared how she came to Eavan's Poetry, as well as the story behind her book "Eavan Boland: Inside History." There were many touching tributes paid to Boland by poets and writers who knew her personally.

They spoke of her poetry, how she traveled the length and breadth of the country in the 1970s, hosting writer’s workshops, supporting Women’s Liberation and generally encouraging Irish women when she could have just concentrated on her own career as a poet, writer and translator and on her then young family. Her brilliance, her energy, her strength of character, and how she democratized poetry and ensured a place both in Ireland and in Irish poetry anthologies for Irish women poets is the stuff of mythology. The other fact most people commented on was her mischievous and slightly wicked sense of humor.

Professor Clíona Ní Ríordáin, of the Sorbonne Paris 3 gave a personal perspective on the life and works of Eavan Boland, before reading Boland’s poem “The Black Lace Fan My Mother Gave Me” (1990). For me, it was a particularly moving reading, Ní Ríordáin and Professor Catherine Lanone, also of Sorbonne Paris 3, were professors for my masters’ program and both went above and beyond duty in their encouragement of their students. They carry Boland’s banner in the excellence of their spoken and written words and their encouragement of other women.

Ní Ríordáin’s reading brought the zoom house down and transitioned into the post-event banter section of the zoom. CLI chairperson Desmond McGetrick, asked award-winning Northern Irish poet, Maria McManus, if she’d like to say something and she said that she had a brand new poem that she’d like to try out on its first-ever audience.

The poem entitled “Remembering Mannin Bay” is one of the most beautiful poems I’ve ever heard. It remembers March 14 2020, when McManus was out walking on Coral Strand, Mannin Bay, Ballyconneelly, Connemara just before going into lockdown. She penned the poem in Belfast, where she lives, on May 8 2020 - the 75th anniversary of VE ('Victory in Europe Day') Day.

When I heard McManus’s strong melodious voice enounce the words "a garden of lace white as alabaster" (l.5 stanza 4) and realizing that although her reading this poem was completely unplanned, her words eerily mirrored Boland's words, “The Black Lace Fan”. I was stunned by the coincidence.

In my mind’s eye I could see the black lace fan which Boland’s mother had leagued her, constituting a family heirloom. I could also envisage the garden of white lace formed by Mannin Bay’s coral, a reminder that the ocean is and always will be there, another legacy of sorts.

For me, it was as if Boland had winked at us zoomers from the grave, and like a poet "bride", had chucked her lace fan “bouquet” over her shoulder at McManus whom she had never met, but from the other side knew would carry on her banner for poetry, for women, for human rights. For me it was written in the “black” of the lace and the alabaster “white” of the coral, bleached by "the tide" and "weather".

Perhaps I heard too many ghost stories as a child but the two poems; both Boland’s and McManus’s gave me goosebumps and a subsequent "someone’s walking over your grave" feeling, which was strange to experience on a Zoom – lending it an electronic literary séance essence.

Read more: The beauty of Irish language as springtime blooms

I wished to share “Remembering Mannin Bay” and the “lace connection” tale before relegating my zooms to memory. That a zoom had evoked such a depth of feelings, while everyone was sitting behind individual screens, dotted across the globe, was remarkable. Perhaps that in itself was also a homage to Boland when I think about poet John O'Donnell’s tribute that day recounting how she loved computers, regarding them as a kind of 'white magic' and how she even designed her own computer programs and wrote her poems directly on the screen.

I wasn’t the only one knocked off my zoom seat by McManus’s poem, fellow zoomer Deaglan Mac An Mhanaigh, originally from West Belfast and currently, Professor of Rhetoric at the illustrious École Polytechnique, Paris, confided “it hit me especially because of the dates, the cross-overs, the inter-twinning, the sounds, the poetic sonority and color mixed with the pure noise....the West, the North, the past and future...So many memories, but so much present”.

So intrigued was I at the time by the beautiful words I contacted McManus who told me that the jets described in the poem were actually a flyover by British military planes to mark VE day which actually scared the life out of her. McManus as a child lived in Enniskillen when “The Troubles” started, and like anyone who lived in Northern Ireland during those years, certain sounds must evoke terror. She explained the words ‘scouts among the Swifts’ (l.1 stanza 4) - the earliest arrivals of the migrating swifts are ‘scout’ birds - looking for the best nesting sites. Swifts form squadrons or screaming parties when they’re out hunting for insects for food.

She liked that they’re ‘squadrons‘, which has that kind of military resonance, and also that they remind her of fighter jets because of the speed and precision with which they fly. I read a little about swifts and found out that they are Ireland’s fastest birds, and they can even ‘sleep on the wing’. McManus feels the swifts' calls are so urgent. She’d heard them above and beyond other sounds - a bit like how she had always been able to recognize her own daughters crying, when they were babies, above and across all other sounds. In the poem, the urgency of the swifts’ calls is a reminder to know that the ocean life is still there and that the ‘answer’, the wild ocean, is still there - a kind of echo of the wildness of the ‘self.’

When we will finally be able to travel home without being subjected to quarantine, I’ll visit Mannin Bay whose geographical coordinates are marked by McManus under the poem’s title. Thank you Maria McManus for this poem so personal and yet so universal, which expressed both the fear and hope of an unprecedented period. It tattooed on my mind the most beautiful and memorable words of my lockdown.

Fighter jets have cut the Belfast sky like shrapnel,

of sound. Perhaps death itself

and suddenly to find me,

then teasing, veered off.

a proxy beach for the cold-water corals

I put into my pocket as keepsakes

the last time I saw the ocean.

This city is holding its breath,

the moon a searchlight watching us;

nothing at ground level moves without scrutiny,

and anything could happen, or so it seems.

And so, when the scouts among the Swifts

arrive overhead today, I am poring over

the shorthand bycatch of Hy-Brasil –

pink maërl, a garden of lace

white as alabaster, blue and pearly

cockles and glass burnished by sand,

a shallow tide, the weather.

(For information although the weekly CLI zooms are over, from August 30 there will be monthly CLI zoom meetings - reach out to Dr. Desmond McGetrick, CLI Chairperson on CLI’s Facebook for future programs and connection details).