As people in Ireland's major cities flocked outside during the good weather, medical experts are urging caution. 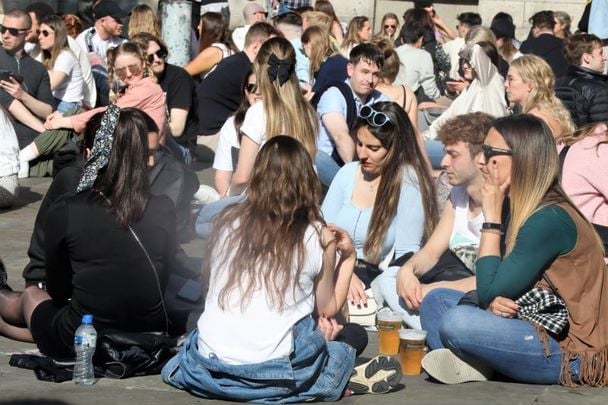 May 29, 2021: Huge crowds of people take advantage of the good weather in Dublin's Temple Bar, as they enjoy takeaway drinks in anticipation of further easing of Covis-19 restrictions next weekend RollingNews.ie

A top medical academic has warned Ireland risks blowing the winning battle against Covid if people return to socializing the way they did before the pandemic.

The alert was raised by Sam McConkey, a professor of infectious diseases at the Royal College of Surgeons in Ireland, after hot weather crowds packed city centers last weekend in Dublin, Cork, and Galway.

Authorities were so alarmed that the mayors of the three cities called for members of the public to take personal responsibility following scenes of large crowds drinking outside.

Gardai, who made 16 arrests, warned that they could close some streets, and Taoiseach Micheál Martin warned that continuing measures to ease the lockdown, like the planned opening of the pubs in July, may have to be reviewed if there is evidence of people not following Covid-19 guidelines.

McConkey, one of the best-known figures in Ireland since he started giving advice on Covid, said everyone knows because of what happened last Christmas, that “socializing December-style” leads to more transmission.

He added to The Irish Times, “It is definitely the case that we could blow this success that we have now with too much socializing, so we do have to take it cautiously.”

The cautious steps that had been taken since March, such as re-opening schools, construction, and retail, had not led to increased transmission.

“But just because it was okay for those partial first steps, doesn’t mean we can go wild, and turn everything back to the summer of 2019,” McConkey said.

Going back to a 2019 type of summer could definitely put Ireland back into a new and fourth wave of the virus.

Although Ireland this week recorded that 2.6 million people had been vaccinated, it was mostly unvaccinated young people who are getting the disease, the bulk of whom have not yet been infected and so have no immunity.

He tweeted, “Like an open air party. This is what we do not need when we have made so much progress.”

Drove into Dublin City Centre to collect someone from work at 815 PM. Absolutely shocked at scenes in South Great George’s St, Exchequer St, South William St area. Enormous crowds- like a major open air party. This is what we do not need when we have made so much progress.

Professor Kingston Mills, head of the Centre for the Study of Immunology at Trinity Biomedical Sciences Institute, said that of particular concern was the so-called Indian version of the disease, likely to become the dominant variant in the UK.

“And without travel restrictions to Ireland, it is going to be very hard to keep it out of here,” he said.

As the mayors of Dublin, Cork, and Galway called on the public to take personal responsibility following scenes of large crowds drinking outside, one of them, Dublin Lord Mayor Hazel Chu, acknowledged that authorities had been telling people they could enjoy the summer.

She told RTE Radio, “For a lot of people, they don’t have back gardens to be outside in, they can’t invite their friends over when they don’t have that space and we need to provide that space, safe space that people can gather within groups and the recommended guidelines.”

Chu said more public toilets were needed in Dublin but orders had not yet gone past the “expressions of interest” stage.

She added, “We should have been ready! We need to get this in check.”