IrishCentral Contributor Katherine Simmons humorously recalls her mother's attempts at driving in the US after growing up in rural Leitrim. 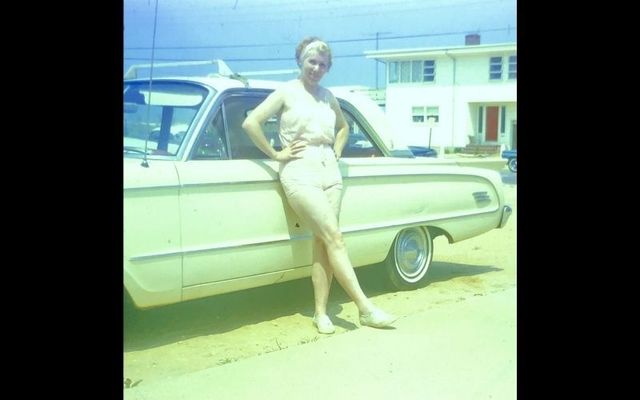 My beautiful mother Mary, “pre license” gearing up for her many later driving adventures Katherine Simmons

“Your mother,” began Jimmy Dillon, who sat contentedly perched on the barstool next to mine.

It was Christmas Eve and the atmosphere rang of reunion and festivity. Publicans was our beloved hometown bar, a place where many had enjoyed their first legal drink and to where they returned once again on these holiday weekends, to bask in friendship and bygone days.

I studied Jimmy, a boy I had known briefly from my neighborhood who had gone on in later years to become a firefighter. Close to fifty now, his twinkling blue eyes and shock of red hair still mirrored his sixteen-year-old self. He continued on, his tone a mixture of fondness and fear.

“Probably the nicest woman I have ever met, but the day she picked me when I was walking home from school? I saw my life pass before my eyes!”

He took a long swig of his beer in an attempt to quell the memory then proceeded to emulate how my mother would ask him a question while driving and then turn full around to where he sat in the back seat, to hear his answer. He weaved and bobbed on the barstool his hands flailing wildly as he re-lived the moment. The last thing I remember him saying as he made his way into the crowd was “would you give her my best? She was just the nicest lady…”

We had heard it all before you see, my sisters and I, as my mother was somewhat of a legend for her driving. Our father perhaps bore the brunt of these mishaps most deeply while fielding numerous phone calls in regards to the fender benders my mother had incurred over the years.  Our Insurance Agent, Joe Kilhenny, was a fixture at many of our family’s Sunday barbeques and in later years attended my wedding.

Growing up on a farm in rural Leitrim, my mother’s mode of transportation was her trusty bicycle which she rode around the countryside. She often described a nearby orchard where she would stop and pick apples on her way to school. I remember how she laughed at the memory of being chased by a farmer after tucking a choice few into her pocket one visit.

In her mid-twenties, she left her cherished Ireland for New York City and became a pediatric nurse at St. Vincent’s hospital in Greenwich Village. Meeting my father shortly thereafter, they married, had four daughters, and settled in a suburb of Long Island. And for a good while, she survived without the need to drive, walking to the nearby market and relying on the kindness of friends when needed.

But as the years passed, the kitchen calendar grew full. Sports, birthday parties, doctor’s appointments, the rhythm of life - all requiring a car and a licensed driver. She could put it off no longer. And the legend began.

It is always debated among our family exactly how many times she took her road test. We settled at nine, though the exact number will always be a mystery. The eighth time she failed, her fiercely loyal best friend Eileen Anello, outraged at the injustice of it all, claimed she “knew a judge.” And whether by the hand of God, my mother’s ability, or that nameless judge, my mother at fifty years of age at last passed her road test.

When I was in middle school, she drove through the McGuire’s backyard. Claiming the road was slippery from a recent rain, she careened through some hedges, jumped a curb, and stopped dead set in the middle of the tidy backyard. Finding no one home she left a note with her name and number, no other explanation needed. The chant of “your mother drove through the McGuire’s backyard!!” echoing through the school bus, haunted me and my three sisters for years.

Our Irish wolfhound caught on early. We never knew exactly what happened, but one day after numerous trips driving with my mother to the dog field, he stubbornly refused to get in the car. Nothing worked. Tugging, pushing, or being cajoled with dog treats. He was done.

In our early months of dating, my future husband was unaware of my mother’s driving escapades. Visiting our home for the first time, through the garage he noticed a refrigerator positioned against the back wall sporting a severely dented door. Entering the house, he asked my father, “Bill, what happened to that refrigerator’s door in the garage?” Without looking up from his paper came the weary reply, “Oh, Mary uses the fridge as a measuring device of sorts. When she gives it a good whack, she knows she has pulled in completely.”

Then there was the time my sister was homesick at college and my mother, as mothers often do, came to the rescue. Never mind we lived in New York and my sister’s college was in Pennsylvania, or that my mother had never before driven on a major interstate highway. There was no question she would go.

So she called on the service of her best friend Lily, an Irish cousin who lived close by and in their youth grew up on an adjoining farm. And off they went that Saturday morning, my mother at the wheel and Lily riding shotgun, to visit my homesick sister. As night fell, I watched my father pace back and forth. It was before cell phones and I had never before seen him so nervous. He clearly realized the seriousness of the situation. And then a phone call from my sister…Mom and Lily had arrived! They were a little later than expected having ended up first in the state of Ohio due to a wrong turn but all was well as they prepared to go to dinner. I always wondered if Lily had aged a few years during that ride to Villanova University as I believe we all did.

Though my mother had a series of accidents throughout her life, what saved her I believe was the fact that she always drove far under the speed limit, an unseen angel on her shoulder or the brake pedal. A good deal of the trouble was that her attention was simply elsewhere, like the day she sheared off the side view mirror of a parked car while adjusting the radio to her favorite Irish station. My sister described turning back to see a dangling mirror as they drove onward, my mother blissfully unaware of the damage left behind. They returned to leave a note on the battered car’s windshield, it too a silent victim.

My wonderful mother has since left this world, but her memory lives on in all who knew and loved her. I see her now, in a faraway place and time still charming all with her brogue and angling at any chance possible, to get behind the wheel once again.

”I am happy to drive down to the gate to pick up our new visitors,” my mother offers. God ponders a moment always touched by her helpful nature. But he is a realist.

“Well thank you, Mary, but it is a beautiful day. Perhaps you could ride down to meet them on your bicycle?”

My mother smiles. If disappointed it does not show. She always did love riding her bicycle…